(Warrant for the Apprehension of Elizabeth Dicer and Margaret Prince, & Officer's Return)

To the Constable of Gloster. complaint haveing ben made to us their Majesties Justices of the Peace in Salem by Ebenezer Babson of Gloster against Elizabeth Dicer wife of Wm Dicer and Margaret Prince widow of Gloster for that they have griveously hurt & Tortured. Elenor Babson widow & Mary Sargent wife of Wm Sarjant Just'e of Gloster by witchcraft & has given Bond to their Majesties to procecut Said Complaint to Effect These are therfore in their Majestes name to require you to Aprehend & seize the Bodys of Elizab't Dicer wife of william Dicer of Boston Seaman & Margret Prince widow of Gloster & them bring before their Majesties Justices of the Peace in Salem their to be Examined about the premises for w'ch this shall be your warrant Salem 3: September 1692.
*Bartho Gedney *John Hathorn *Jonathan. Corwin

Margaret Prince of Capan [Cape Ann] examined Sept 5: 1692 before. Jno Hawthorn Esq & other ye majests Justices Margaret Prince you are Complayned of for afflicting of the Widdow Babson: & Wm Serjants wife of Capan. what say you. She answered I am: inocent Mr Serjant of Capan was asked: what: he could say. of this woman: he sd his sister. was greivously afflicted: & the Afflicted persons sd that this woman hurt her: but he: knew nothing but that Her conversation was: well: & good: Eliz Hubert & mary warin were struck down into a fitt and helped up: & was well by a touch of sd Princes hand mary warin was helped another time so: Eliz Boothe & George Boothes wife: were asked if ever ˆ{they had} seen this woman: they sd no not before but both they: & two more were struck down into a fit & recovere[d] by a touch of sd Princes hand: & they sd the woman at the bar hurt them. Some of the afflicted sd they saw the black man on: the table:: divers of them: having their eyes fixed was asked what they saw. & when: they could speake: sd they saw a coffin: Elizabeth Hubberd sd that Margret Princes spectre. had told her that she killd Mrs Duncun of Capan but sd Prince sd she had never hurt sd Duncun nor Babson nor would not hurt anybody for a thousand worlds Eliz Hubbert: was dumb: for a while. & yong Babson sd Eliz Hubbert told him as they came from Capan. that goodwife prince: told her she should not speak anything against her. when she came to Salem this is the substance: of what was sayd: to. & by Margret Prince: att: her exam[i]nation Attest Simon Willardr I und written bei[n]g. appinted: by Athority to take ye above: examination doe testifie upon oath taken in Court: that this: is a tru Coppy: of the substance of it: to the best of my knowledge 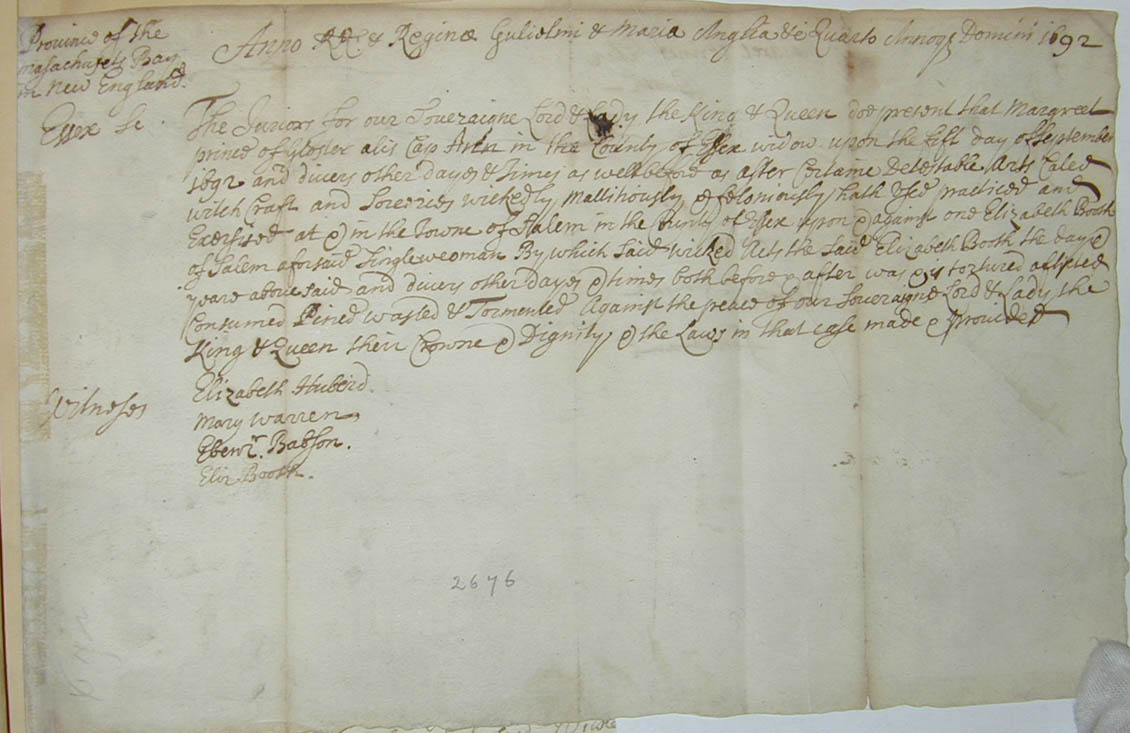 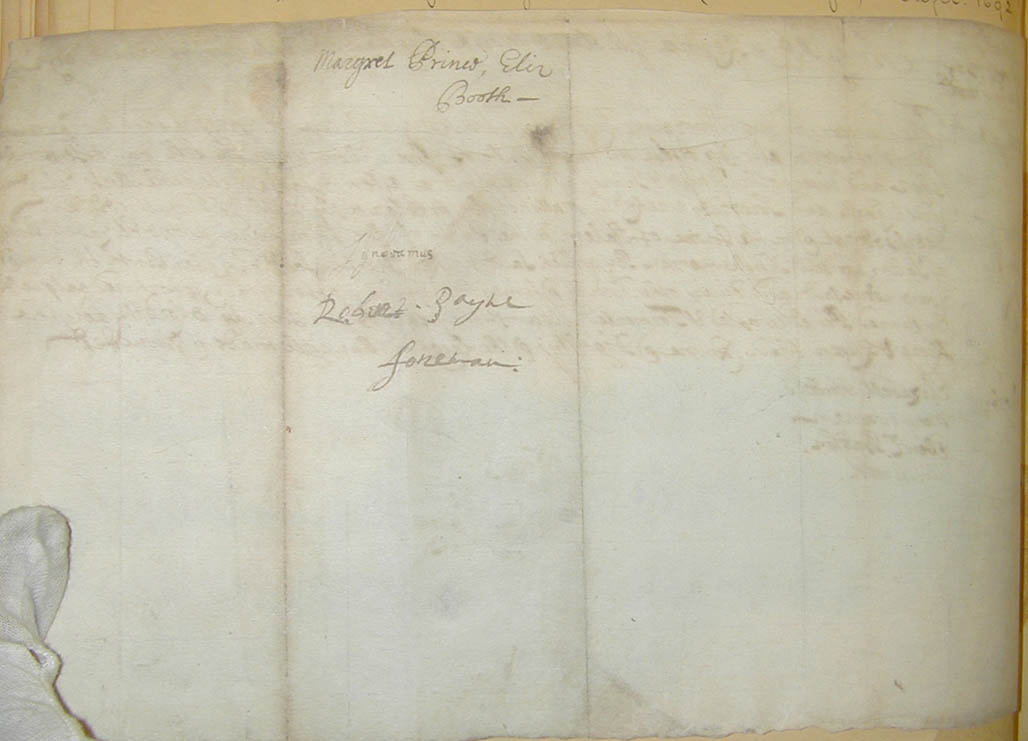 Province of the Massachusets Bay in New England ] Anno RR's & Reginae & Mariae Angliae &c Quarto Annoq'e Domini 1692 Essex ss The Juriors for our Soveraigne Lord & Lady the King & Queen doe present that Margreet Prince of Gloster alis Cap Ann in the County of Essex widow upon the fift day of September 1692 and Divers other Dayes and Times as well before as after Certaine Detestable Arts Caled witch Craft and Sorceries wickedly Mallitiously & feloniously hath used practiced and Exersised at & in the Towne of Salem in the County of Essex upon & against one Elizabeth Booth of Salem aforsaid Singlewoman By which Said Wicked Acts the Said Elizabeth Booth the Day & yeare above said and Divers other Dayes & times both before & after was & is tortured aflicted Consumed Pined wasted & Tormented Against the peace of our soveraigne Lord & Lady the King & Queen their Crowne & Dignity & the Laws in that case made & Provided. 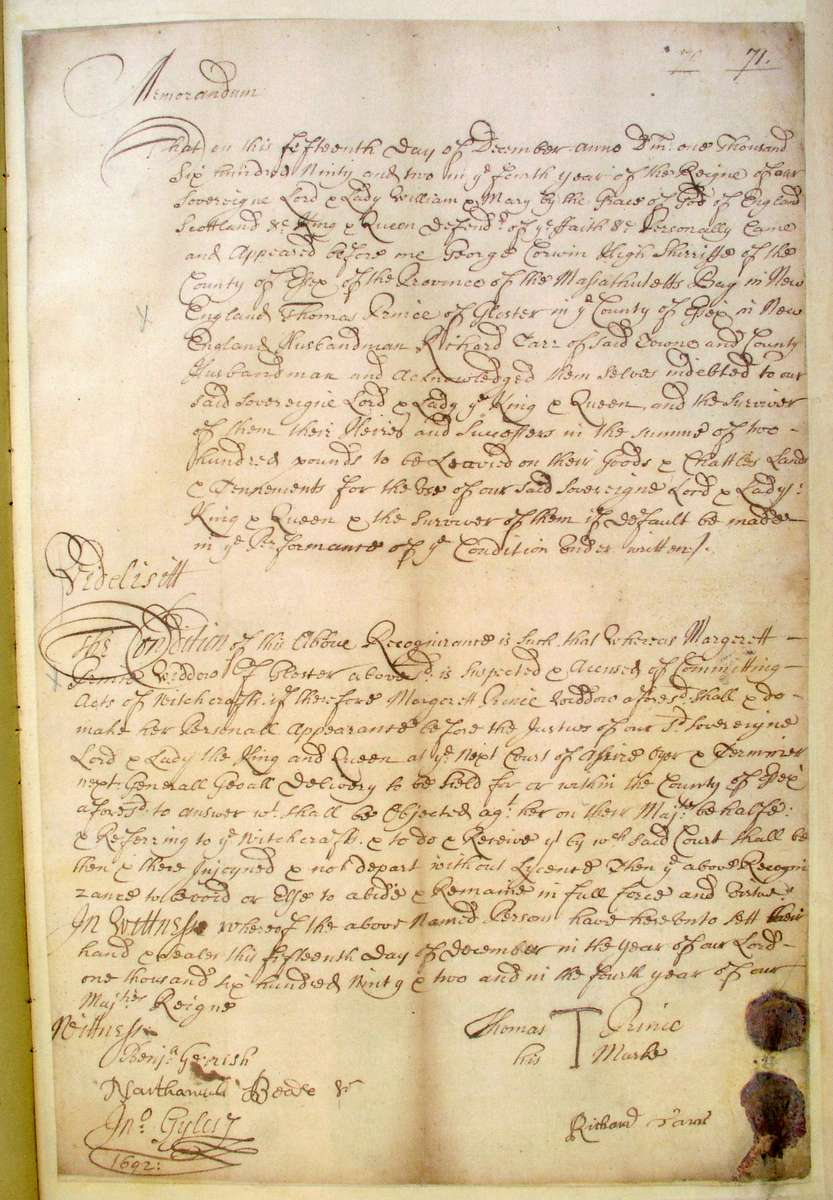 That on this fifteenth Day of December anno D[mbar ]: one Thousand Six hundred Ninty and two in the fourth year of the Reigne of our Sovereigne Lord & Lady William & Mary by the Grace of God of England Scottland &c King & Queen Defend'rs of the faith &c Personally Came and Appeared before me George Corwin High Shirriffe of the County of Essex of the Province of the Massathutetts Bay in New England Thomas Prince of Gloster in the County of Essex in New England Husbandman Richard Tarr of said Towne and County Husbandman and Acknowledged them selves indebted to our said Sovereigne Lord & Lady the King & Queen, and the Surviver of them their Heires and Successers in the summe of two hundred pounds to be Leavied on their Goods & Chattles Lands & Tennements for the Use of our said Sovereigne Lord & Lady: King & Queen & the Surviver of them if Default be made in the Performance of the Condition Under written

The Condition of this Above Recognizance is such that Whereas Margarett Prince Widdow Of Gloster aboves'd: is suspected & Accused of Committing Acts of Witchcrafts. if therefore Margerett Prince Widdow afores'd shall & do make her Personall Appearance before the Justices of our s'd Sovereigne Lord & Lady the King and Queen at the Next Court of Assize Oyer & Terminer next: Generall Geoall Delivery to be held for or within the County of Essex afores'd to answer w't shall be Objected ag't her on their Maj'ties behalfe: & Referring to the Witchcrafts. & to do & Receive that by w'ch said Court shall be then & there Injoyned & not depart without Lycence Then the above Recognizance to be void or Else to abide & Remaine in full force and Virtue In Wittness whereof the above Named Persons have here unto sett their hand & seales this fifteenth Day of December in the year of our Lord one thousand six hundred Ninty & two and in the fourth year of our Maj'ties Reigne