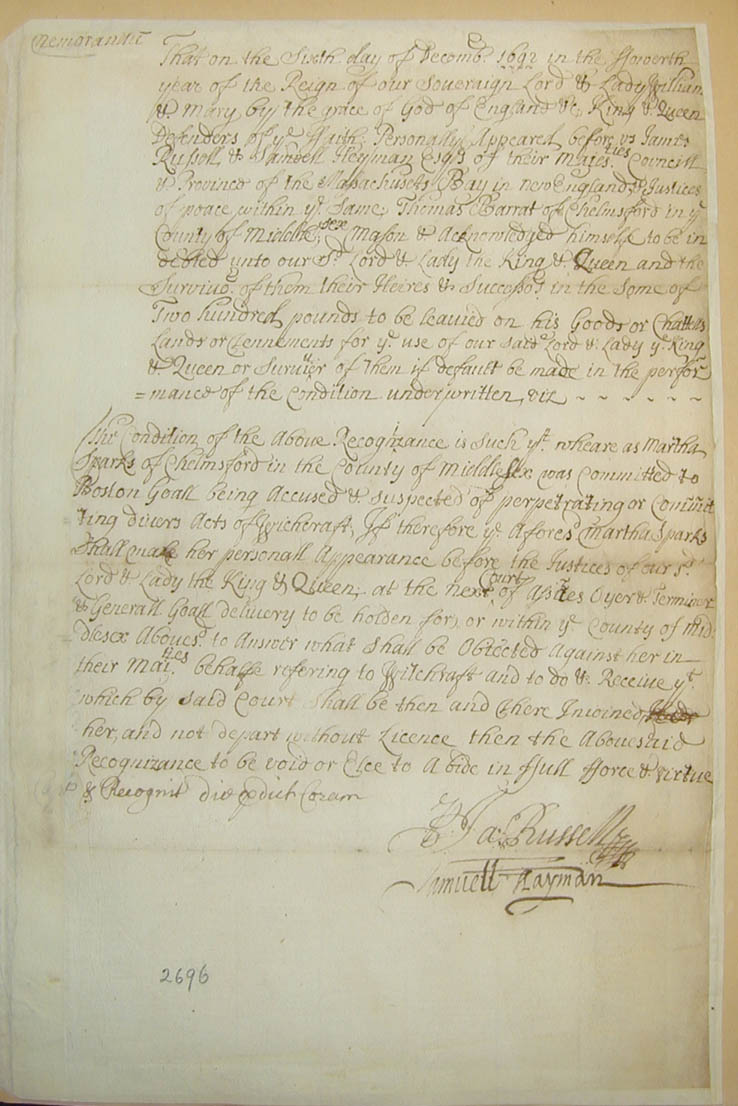 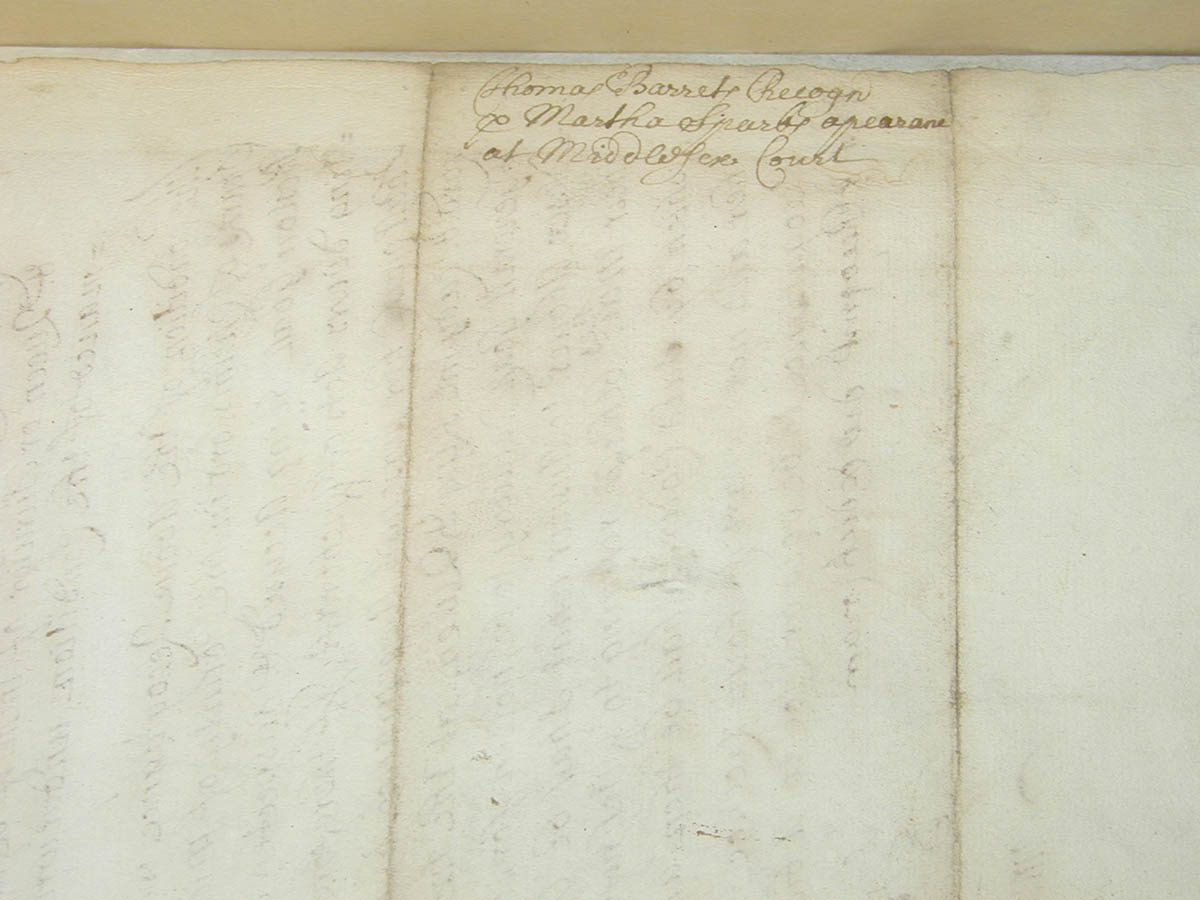 That on the Sixth day of Decemb'r 1692 in the fowerth year of the Reign of our Soveraign Lord &. Lady William & Mary by the grace of God of England &c King & Queen Defenders of the faith: Personally Appeared before us James Russell & Samuell Heyman Esq's of their Majes's Councill & Province of the Massachusetts Bay in new England, & Justices of peace within the Same; Thomas Barrat of Chelmsford in the County of Middlesex, Mason & Acknowledged himselfe to be indebted unto our S'd Lord & Lady the King & Queen and the Survivo'r of them their Heires & Successo'rs in the Some of Two hundred pounds to be leavied on his Goods or Chattells Lands or Tennements for the use of our saide Lord & Lady the King & Queen or Surviver of Them if default be made in the performance of the Condition underwritten, viz --

The Condition of the Above Recognizance is Such that whereare Martha Sparks of Chelmsford in the County of Middlesex was Committed to Boston Goall being Accused & suspected of perpetrating or Committing Divers Acts of Witchcraft; If therefore the Afors'd Martha Sparks Shall make her personall Appearance before the Justices of our s'd Lord & Lady the King & Queen; at the next Court of Assizes Oyer & Terminer & Generall Goall delivery to be holden for, or within the County of Middlesex Aboves'd to Answer what shall be Objected Against her in their Maj'ties behalfe refering to Witchcraft and to do & Receive that which by said Court shall be then and there Inioined #(Her) (and), her, her, and not Depart without Licence then the Aboves'd Recognizance to be void or Elce to Abide in full force & virtue
Cap't & Recognit die per dict Coram 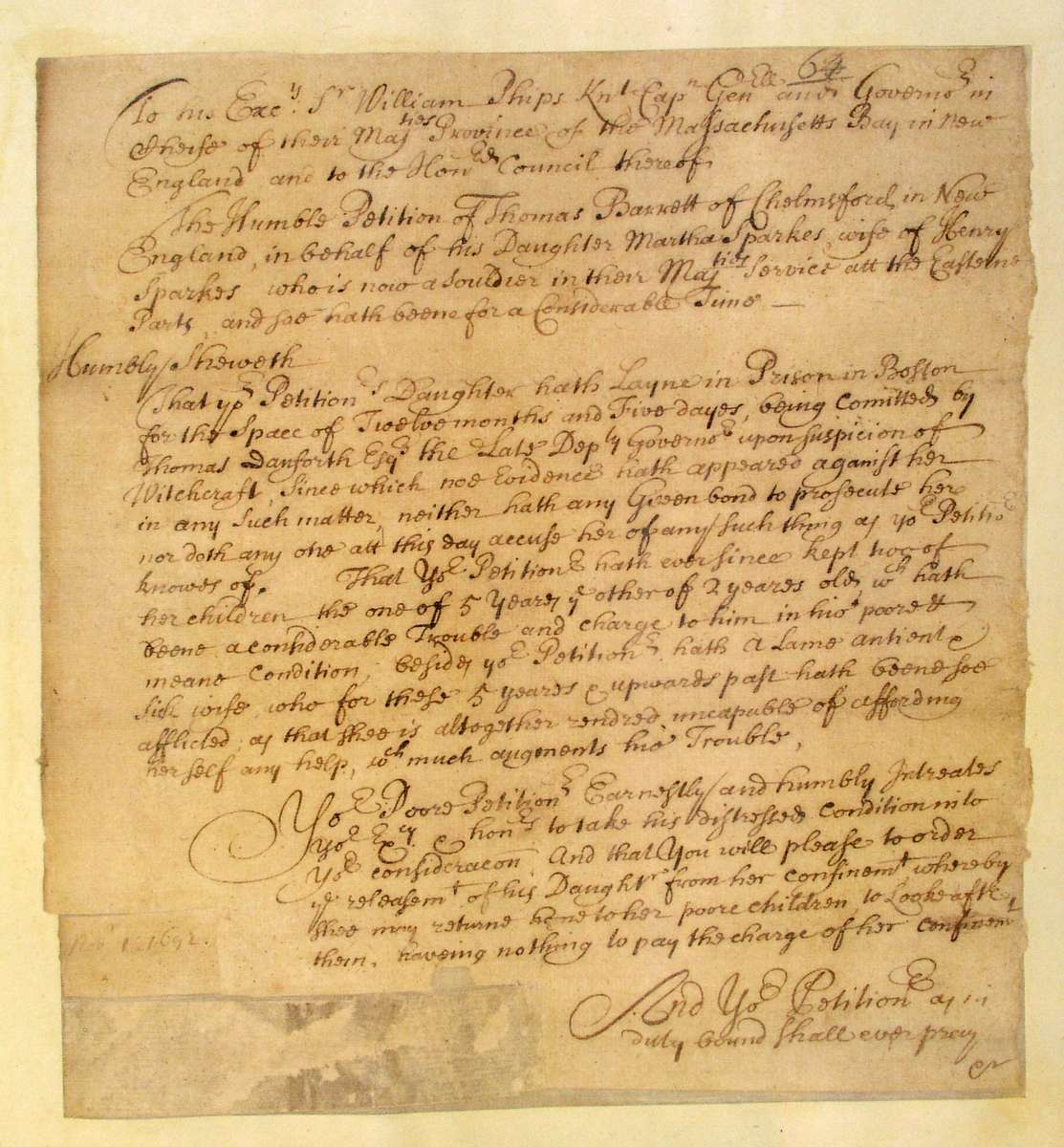 The Humble Petition of Thomas Barrett of Chelmsford in New England, in behalf of his Daughter Martha Sparkes wife of Henry Sparkes who is now a Souldier in their Maj'ties Service att the Easterne Parts, and soe hath beene for a Considerable Time --
Humbly Sheweth
That yo'r Petition'rs Daughter hath Layne in Prison in Boston for the Space of Twelve months and Five dayes, being Comitted by Thomas Danforth Esq'r the Late Dep'ty Governo'r upon suspicion of Witchcraft, Since which noe Evidence hath appeared against her in any Such matter, neither hath any Given bond to prosecute her nor doth any one att this day accuse her of any such thing as yo'r Petitio'r knows of. That Yo'r Petition'r hath ever since kept two of her children the one of 5 Yeares the other of 2 yeares old, w'ch hath beene a considerable Trouble and charge to him in his poore & meane Condition, besides yo'r Petition'r hath a Lame antient & Sick wife who for these 5 yeares & upwards past hath beene soe afflicted; as that shee is altogether rendred uncapable of affording herself any help, w'ch much augments his Trouble,