She owned she had bin in the snare a monthe: or 2: and had bin perswaded to it: 3 monthes: & that the devil: apeared to her like a colt. very ugly: the first: time: but she would not own: that she had bin baptized by him. she did not know but that the devil did perswade her: to renounce god & christ & folow his wicked wayes & that she did take his Counsell: and that she did afflict Timo: Swan: she did not know but that the devil might ask: her body & soul: & she knows not but that she did give him soul & body: after ward she s'd she did do itt & that she would for sake god & his works: and the devil promised her: to give her powr: to avenge her selfe on them that offended her afterward she s'd the devil apeared to her 7 year agoe: & that he had tempted her to ly and had made her to afflict persons but she could not tell their names that she first afflicted: Q who came w'th the devil when he made you a witch A: a ragged girl: they came to gether and they perswaded me to afflict: & I afflicte mary warin & an other fayr face: it is abo't a quarter of a year agoe: I did it by sticking of pins. but did you afflict Swan: yes but I am sorry for it: Q where had you your spear A I had nothing but an all but was it with yo'r body or spirit you came to hurt these mayds: A with my spirit: Q but can you ask them forgivnes: A: I wil fall down on my knees: to ask it: of them: She would not own: that she signd the devils book when he askd her body & soul: but he would have had her done it nor. to a burch Rign: nor nothing: she s'd the devil was in the Shape of a hors when: he caried her to afflict: but would not own any body went with her to afflict but the afflicted s'd her son Dan'll went with her: to afflict: Q did you not say: the Devil babtized yo'r son Daniell. A he told me so: but: did you not touch the book nor lay yo'r hand on book nor paper: A I layd my hand on nothing without it was a peice of board: and did you lay yo'r hand on the board when he bid you. A yes: mary Lascy: s'd she had given her son Dan'll to the devil; at 2 years old: & that her aperition told her so: but: she could not remember it: she was bid to take warin & lasy by the hand & beg forgivnes & did so: & they forgave her. she s'd if she had given her son Dan'll to the devil it was in an Angry fitt she did not know but she might do it nor I do not know he is a wich but I am afrayd he is: mary lascy saw her son Dan'll stand before her & s'd Dan'll bid his mother not confess he was a Wich: his mother: did not know she s'd but: she might se him for she saw a burlling: thing before her: Mary lascy s'd she had babtized her: son Dan'll & that she had bin babtized in five mile Pond: she s'd the reason she feared Dan'll was a witch: was because he used dredfull bad words when he was Angry: and bad wishes being asked: the #[s'd her] age of Dan'll: s'd he was 28 years old: she was told she had bin long a witch: then if she gave her son to the devil at 2 years old she owned she had bin discontented since she had bin in league: with the devil: she knew not but the devil might come once a day: lik a mous: or ratt: she s'd she knew Sarah parker but did not know her to be a wich: but she heard she had bin crosd in love & the devil had come to her & kisd her

(Reverse) who was with you when you afflicted Swan: A. no body but my son Dan'll he was there when I came: theether: she would have Dan'll perswaded to confes: but was told she were: best to per- wade him becaus she knew him to be a wich: she was askt if she was at the execution: she was at the hous below: the hill: she saw a few folk: the woman of the hous had a pin stuck into her foot: but: she s'd she did not doe it: but how do you afflict: A I Consent to it: but have you bin a wich 26 years: A no I can remember but 7: years & have afflicted: about a quarter of a year: but: if you have bin a wich so long: why did you not afflict before seing you promised to serv the devil A: others: did not Afflict before: and the devil: did not require it: but: doth not the devil threaten: #[to tare] you #[in peices:] if you not do what he ses: A yes he thretens to tere me in peices but did you use: to goe to meeting on sabath dayes: yes: but not so often as I should have done: what shape did the devil Com in when you layd yo'r hand on the board:
A. I cannot tell except it was a mous #[or rat]

August 31't: 1692 Present Jn'o Hathorne Jona't Corwin Esq'r
Rebeca Eames further acknowledgeth & declareth that she was baptized aboute three years agoe in five Mile pond and that her son Daniell was also then baptized by the Divell, and that her son Daniell hath benne a Wizard aboute thurteene Yeares and that Toothaker Widow, and Abigail faulkner are both Witches and that her son and both them have benne in Company with her in Andover afflicteing of Timothy Swan and further Confirmes what she formerly acknowledged (viz) that she hath benne a wicth this 26 years and that the Divell then appeared to her in the likeness of a black man and she then gave herselfe she sayth soul and body to the Divell and promised to sarve & obey him and Keepe his ways and further declares that she did Then at that tyme signe to a paper the Divell then had that she would soe doe and sayth she made a Mark upon said paper with her finger, and the spott or Mark she made was black, and that she was then in such horror of Conscienc that she tooke a Rope to hang herselfe and a Razer to cutt her throate by Reason of her great sin in Committing adultery & by that the Divell Gained her he promiseing she should not be brought out or ever discovered.
the abovesaid Confession is the truth as wittnese my hand
The mark of
Rebecka Emes
Exa 31 August 92 Salem,
Rebecka. Emes. signed & owned the abovesaid Conffesion to be
the truth before me *John Higginson Justice of peace.
15 Sep't 1692

The Juriors for o'r Sov'r Lord and Ladÿ the King & Queen doe present That Rebeckah Eames Wife of Robert Eames of Boxford in the County afores'd About Twentÿ six years past in the Towne of Boxford in the County aforesaid Wickedlÿ & felloniously A Covenant with the evill Speritt the Devill did make in & by which Wicked Covenant Shee the said Rebeckah Eames hir Soule & body to the Devill did give & promised to serve & obeÿ him & Keep his Waÿes, Contrary to the Stattute Of the first yeare of the Reigne of King James the First in that Case made & provided And Against the peace of o'r Soveraigne Lord & Lady the King & Queen their Crowne & dignity Cogn. 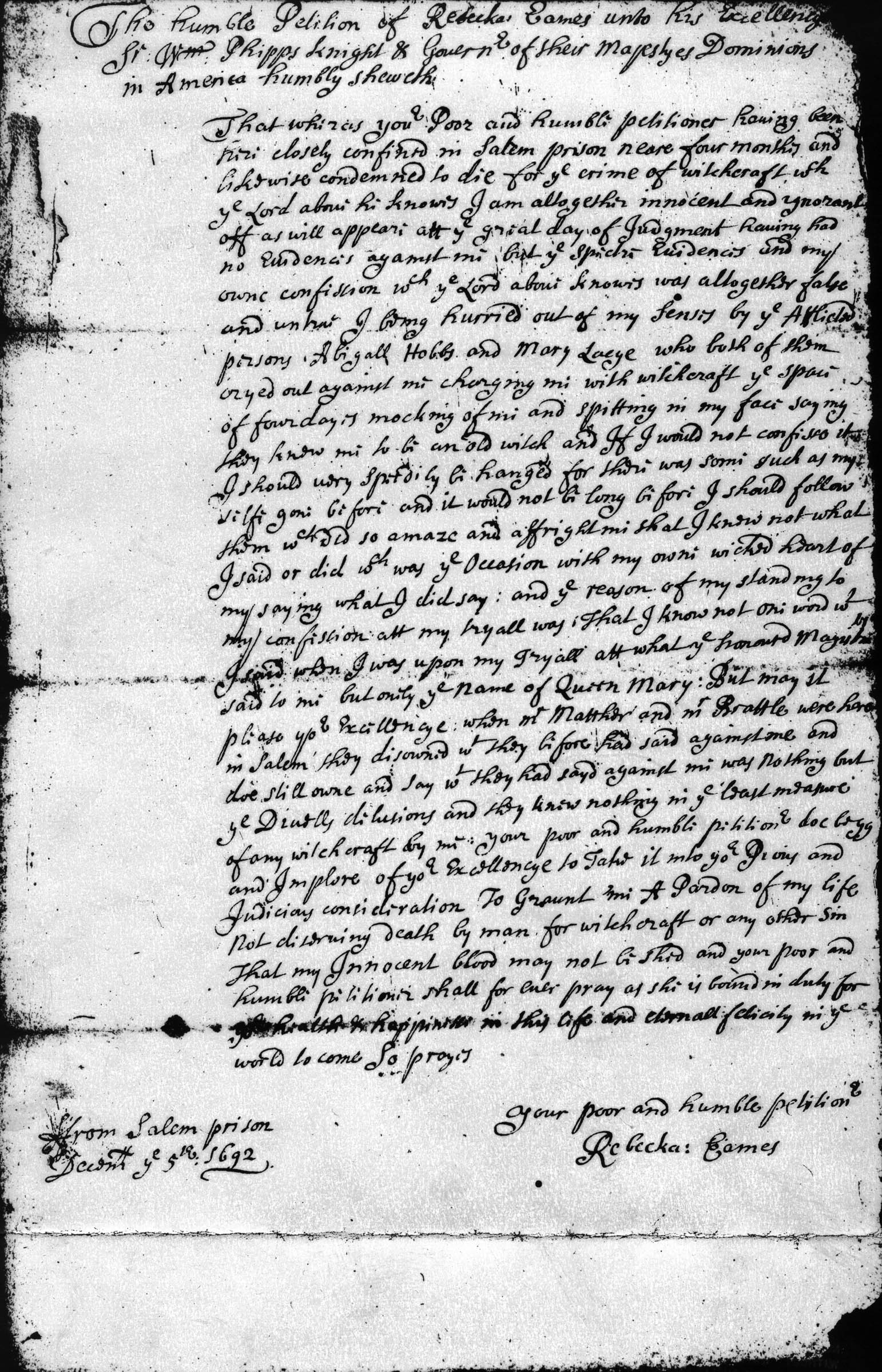 (Petition of Rebecca Eames for a Pardon)

That wheras your Poor and humble petitioner having been here closely confined in Salem prison neare four monthes and likewise Condemned to die for the crime of witchcraft w'ch the Lord above he knowes I am altogether innocent and ignorant off as will appeare att the great day of Judgment having had no Evidences against me but the Spectre Evidences and my owne confession w'ch the Lord above knowes was altogether false and untrue I being hurried out of my Senses by the Afflicted persons. Abigaill Hobbs and Mary Lacye who both of them cryed out against me charging me with witchcraft the space of four dayes mocking of me and spitting in my face saying they knew me to be an old witch and If I would not confesse it I should very Spedily be hanged for there was some such as my selfe gone before and it would not be long before I should follow them w'ch was the Occasion with my owne wicked heart of my saying what I did say: and the reason of my standing to my confession att my tryall was: That I know not one word w't I said when I was upon my Tryall att what the honourd Majestr'ts said to me but only the Name of Queen Mary: But may it please yo'r Excellencye: when mr Matther and mr Brattle were here in Salem they disowned w't they before had said against me and doe still owne and say w't they had sayd against me was Nothing but the Divells delusions and they knew nothing in the least measure of any witchcraft by me: your poor and humble petition'r doe begg and Implore of yo'r Excellencye to Take it into yo'r Pious and Judicious consideration To Graunt me A Pardon of my life Not deserving death by man for wichcraft or any other Sin That my Innocent blood may not be shed and your poor and humble petitioner shall for ever pray as she is bound in duty for yo'r health & happinesse in this life and eternall felicity in the world to come So prayes

from Salem prison
Decem the 5th: 1692 Your poor and humble petition'r
*Rebecka: Eames