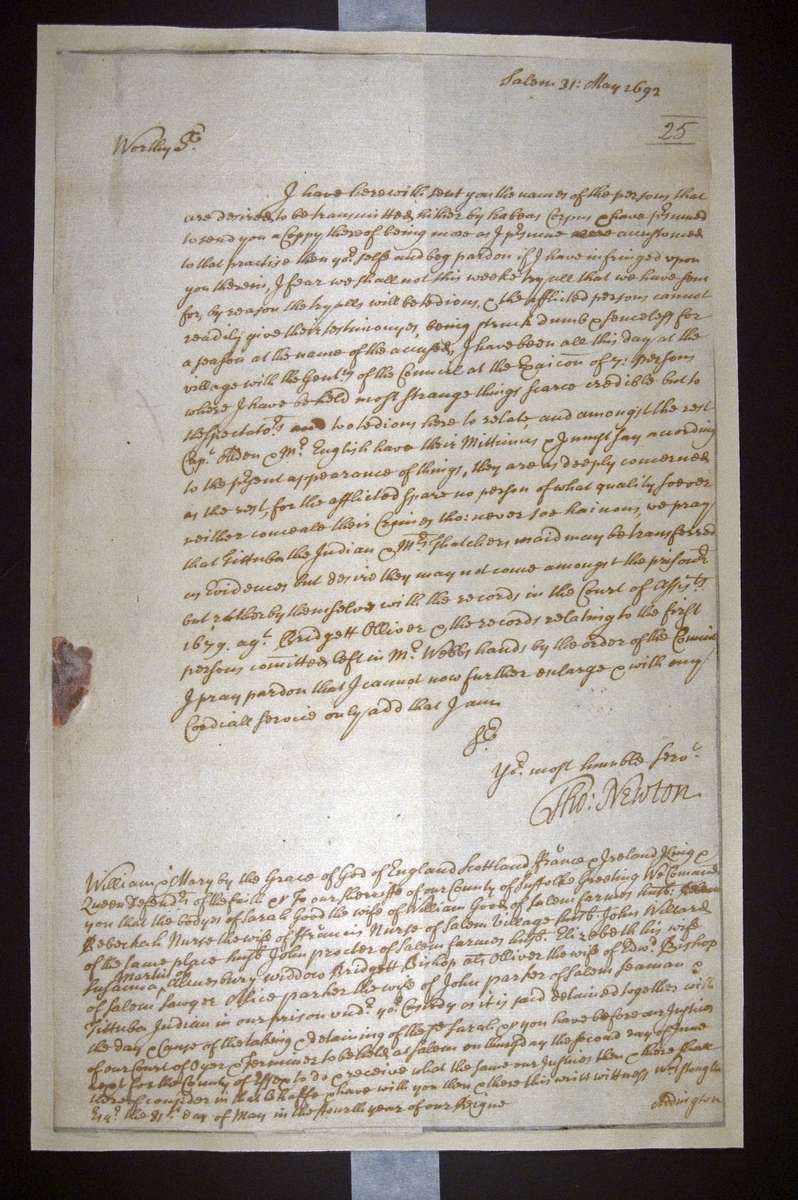 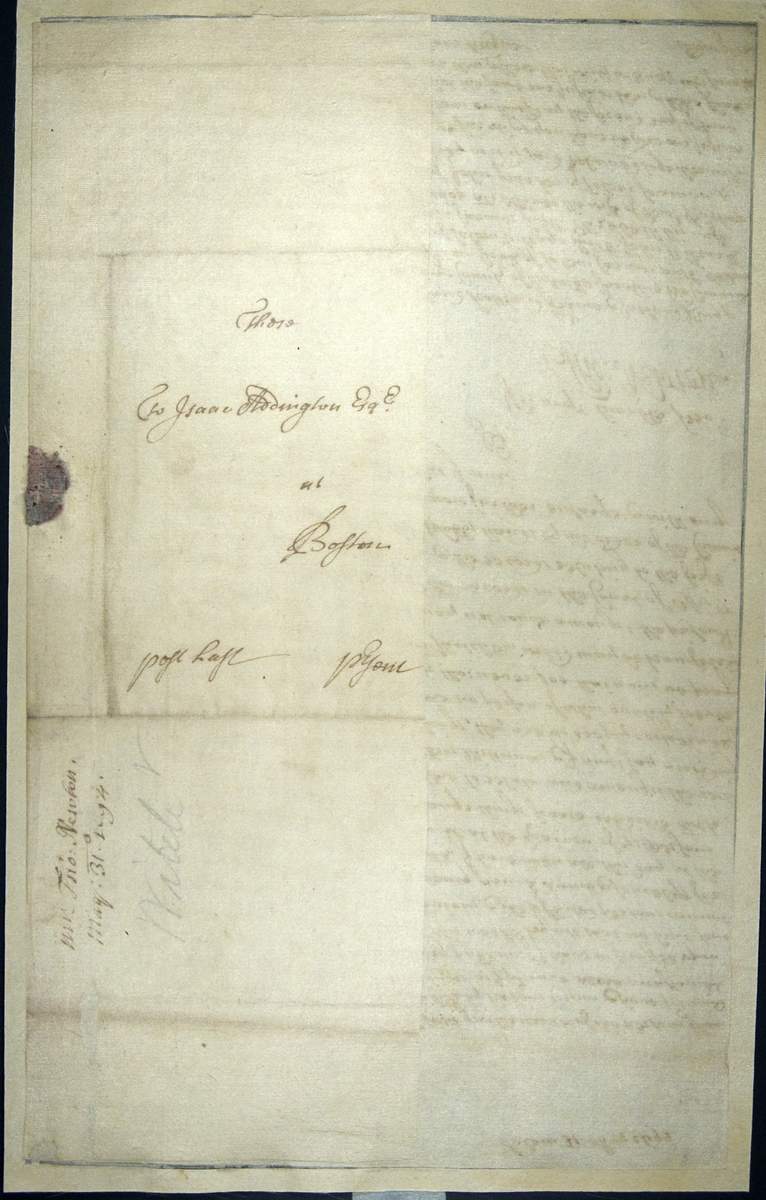 Salem 31: May 1692 Worthy S'r
I have herewith sent you the names of the persons that are desired to be transmitted hither by habeas Corpus & have pr'sumed to send you a Coppy thereof being more as I pr'sume #[more] accustomed to that practise then yo'rselfe and beg pardon if I have infringed upon you therein, I fear we shall not this weeke try all that we have sent for, by reason the tryalls will be tedious, & the afflicted persons cannot readily give their testimonyes, being struck dumb & senceless for a season at the name of the accused, I have been all this day at the village with the Gent'n of the Council at the exaicon of [7]: persons where I have beheld most strange things scarce credible but to the spectators and too tedious here to relate, and amongst the rest Capt Alden & Mr English have their Mittimus & I must say according to the pr'sent appearance of things, they are as deeply concerned as the rest, for the afflicted spare no person of what quality soever neither conceale their Crimes tho: never soe hainous, we pray that Tittuba the Indian & Mrs Thatchers maid may be transferred as Evidences but desire they may not come amongst the prison'rs but rather by themselves with the records in the Court of Assis'ts 1679 ag't Bridgett Olliver & the records relating to the first persons comitted left in Mr Webbs hands by the order of the Council I pray pardon that I cannot now further enlarge & with my Cordiall service only add that I am
S'r
Yo'r most humble serv't
*Tho: Newton

William & Mary by the Grace of God of England Scottland France & Ireland King & Queen Defend'rs of the faith &c To our sherriffe of our County of Suffolke Greeting We Comand you that the bodyes of Sarah Good the wife of William Good of Salem farmes husb: #[Rebeca] Rebeckah Nurse the wife of francis Nurse of Salem Village husb. John Willard of the same place husb. John Procter of Salem farmes husb. Elizabeth his wife Susanna Martin of Almesbury widdow Bridgett Bishop als Olliver the wife of Edw'd Bishop of Salem Sawyer Alice parker the wife of John parker of Salem seaman & Tittuba Indian in our prison und'r yo'r Custody as it is said detained together with the day & Cause of the taking & detaining of the s'd Sarah &c you have before our Justices of our Court of Oyer & Terminer to be held at salem on thursday the second day of June next for the County of Essex to do & receive what the same our Justices then & there shall thereof consider in that behaffe & have with you then & there this writt wittness Wm. Stoughton Esq'r the 31'st day of May in the fourth year of our Reigne
Addington

(Reverse) These To Issac Addington Esq'r at Boston
poast hast pr'sent
Mr Tho. Newton.
May 31 1692

You Thomas Newton Gent' being apointed to perform the Office of their Maj'ts Attorny-Gen'l in the prosecution of the several persons to be indicted and Tryed before their Maj's Justices of Oyer and Terminer now sitting, and from time to time to sit, by vertue of the Comission now published, and in all other matters that may be requisite in the Execution of the sam [] Do swear, that according to your best skill, you will act truly and faithfully on their Majesties behalf, as to Law and Justice doth appertain, without any favour or Affection.
So help you God.
Salem, June 2'd 1692 Thomas Newton
tooke the oath abovesayd in open
Court before me
*Wm. Stoughton.

You being Appointed to officiate as Clerk of this Court, Do Swear #[by the] that
you will carefully & truly execute and perform whatever into your Duty in that
Place as a Clerk doth appertain
So help you God

Salem, June 2'd 1692. Stephen Sewall
in open Court made oath as above to doe the duty of his place as Clerke.

(Reverse) The Oathes Given to
Mr Tho: Newton & Step. Sewall

(Warrant for Jurors for the Court of Oyer and Terminer)

To the Sherriffe of the County of Essex./

You are Required in their Ma'ties Name to Impannel and return Forty good and lawful men of the freeholders and other Freemen of y'r Bailiwick duely qualified to Serve on the Jury of Tryals of life and death at the next Session of their Ma'ties Special Court of Oyer and Terminer, in Salem upon Tuesday the Sixth day of Septemb'r next at nine in the morning, whome you are by your Selfe, Under Sherriffe, or Deputy; to Summon to attend the said Court. at the time above specified,
You are alike Required in their Ma'ties Name to give Notice (Seal) and Summon the Grandjurors that were Impanneled and Sworn at the last Session of said Court, to attend again upon Tuesday the said Sixth of September next by the time above mentioned; Hereof you may not faile; Given under my Hand and Seal, At Boston the 31'th day of August. 1692. In the fourth year of their Ma'ties Reign
*Wm. Stoughton