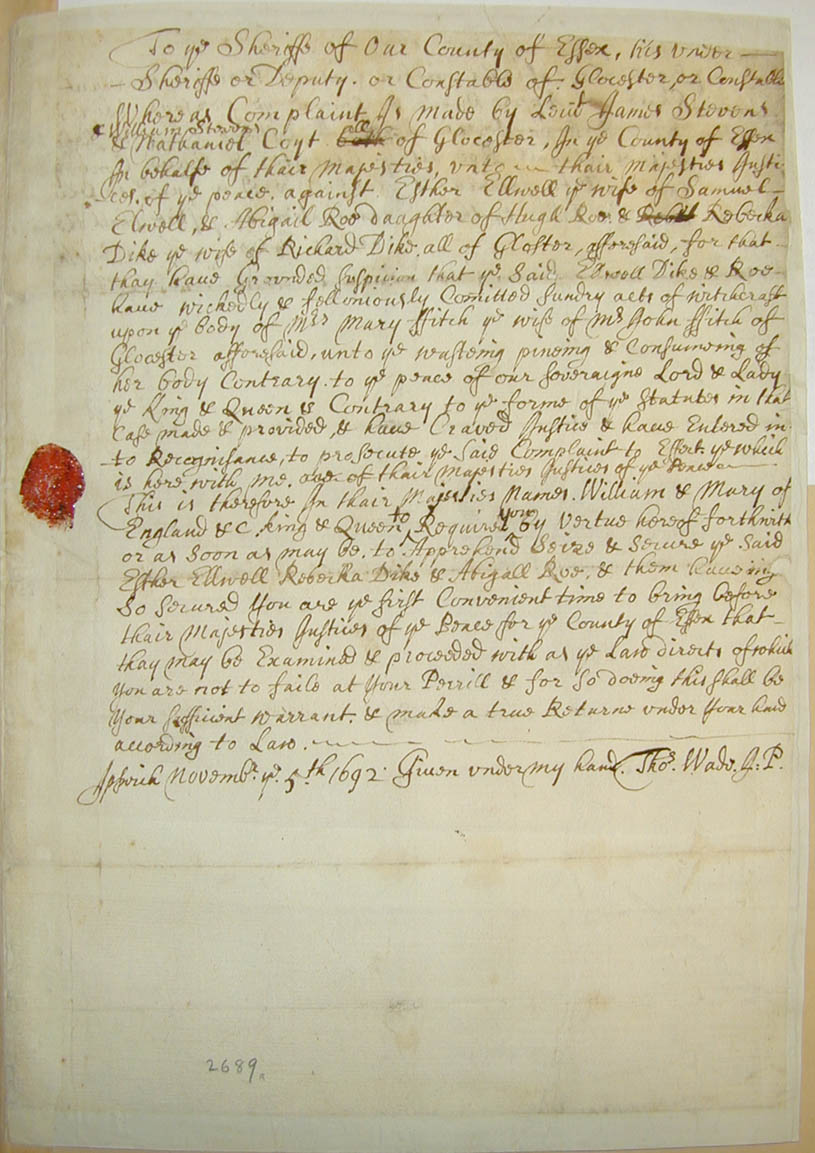 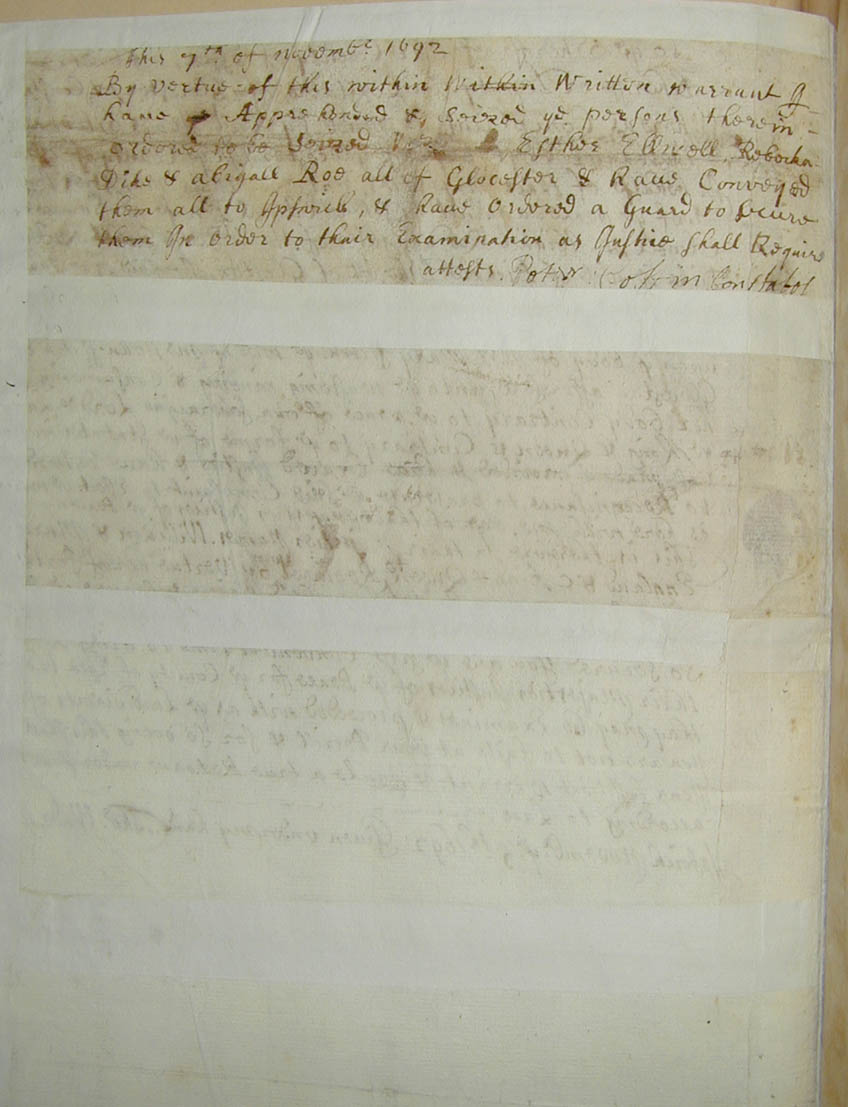 To the Sheriffe of Our County of Essex, his under Sheriffe or Deputy. or Constable of Glocester, or Constable. Whereas Complaint Is made by Leut. James Stevens & William Stevens & Nathaniel Coyt all of Glocester, In the County of Essex In behalfe of their Majesties, unto -- thair Majesties Justices. of the peace. against Esther Ellwell the wife of Samuel Elwell, & Abigail Roe daughter of Hugh Roe: #[Robta] & Rebecka Dike , the wife of Richard Dike . #[both] all of Gloster, af

aforesaid, for that they have Grounded suspicion that the Said Elwell Dike & Roe have wickedly & felloniously Comitted Sundry acts of witchcraft upon the body of Mrs. Mary fitch the wife of Mr. John fitch of Gloaster afforesaid, unto the Wasteing pineing & Consume- ing of her body Contrary to the peace of our sovereigne Lord & Lady the King & Queen & Contrary to the forme of the statutes in that Case made & Provided. & have Craved Justice & have Entered into Recognisance, to prosecute the Said Complaint to Effect. the which is therefore In their Majesties Names. William & Mary of England &c King & Queen to Require you by vertue hereof forwith or as soon as may be, to Apprehend Seize & Secure the Said Esther Ellwell Rebecka Dike & Abigall Roe & them haveing So Secured You are the first Convenient time to bring before their Majesties Justices of the Peace for the County of Essex that thay may be Examined & Provided with as the Law Directs of which You are not to faile at your Perrill & for So Doeing this shall be Your sufficient Warrant, & make a true Returne under Your hand according to Law --
Ipswich Novemb'r. 5th 1692 Given under my hand
*Tho's. Wade . J: P.

(Reverse) This 7th of novemb 1692
By vertue of this within Within Written warrant I have the Apprehended & Seized the persons
therein ordered to be Seized Viz Esther Ellwell, Rebecka Dike & abigall Roe all of
Glocester & haue Conveyed them all to Ipswich, & haue ordered a Guard to secure them In
order to thair Examination as Justice shall Require
attests. Peter: Coffin Constabel 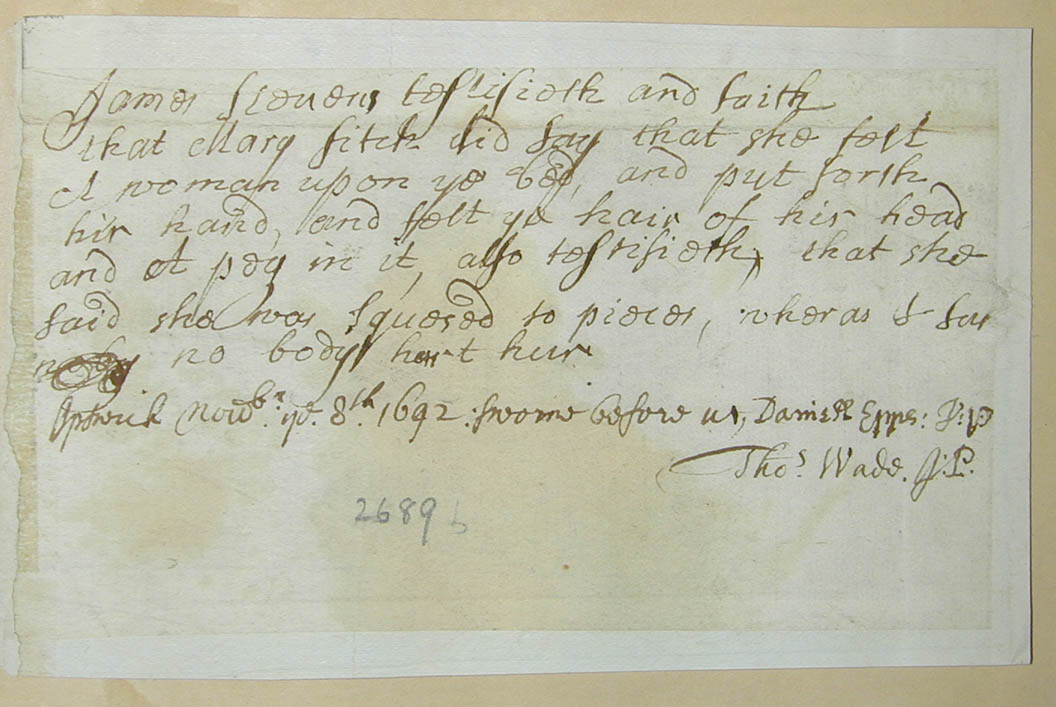 James Stevens testifieth and saith that Mary Fitch did say that she felt A woman upon the bed, and put forth hir hand, and felt the hair and felt the hair of hir head and A peg in it, also testifieth that she said she was squesed to pieces, whereas I saw no body hurt hur.
Ipswich Nov'br: the 8th 1692 sworne before us, *Daniell Epps , J: P:
Tho's. Wade: J: P:

The Deposition of Elizabeth Hubburd aged Seventeen years saith: that she saw Abigall Row Ester Elwell & Rebecca Dike ^or three in ther likeness^ o pressing Squezeing & choaking of mary ffitch the wife of John ffitch: which was done on thirsday the third of November ^1692^ and at Severall other times, & ye ^last^ night that. Night she said, fitch did she saw one on one side & another- on ye other side & one at her back.
Ipswich 9br the 8th 1692. affirmed before us Daniell Epps, J:P
Thos. Wade. J:P.

(Reverse) Elizabeth: Hubard being asked whither she thought that ye persons within named was ye Cause of ye death of Mary fitch she said she could not tell what to think about it.