Essex To the Constables of Andov'r

Complaint being made to me this day, by Sam'l Martin of Andover & Moses Tyler sen'r of Boxford, against Willia Barker sen'r Mary Marstone the wife of John Marstone jun'r & Mary Barker the daughter of Lef't John Barker , all of Andov'r in that the aboves'd William Barker Mary Marstone & Mary Barker, have woefully afflicted & abused, Abigail Martin & Rose foster of Andov'r, & Martha Sprague of Boxford by witchcraft, Contrary to the peace of o'r sovereigne Lord & Lady #[King] William & Mary King & Queen of England &c: & to their Majes'ts Laws in that Case provided:

These therefore require you in their Majes'ts names upon sight hereof, to apprehend & seize the bodies of William Barker sen'r Mary Marstone the wife of John Marstone jun'r & Mary Barker the daughter of Lef't John Barker all of Andov'r & them safely Convey to Salem, before their Majes'ts justices of the peace there, to be examined & proceeded with according to law, for which this shall be yo'r warrant: given und'r my hand & seal this #[eighteenth] 25'th [25] day of August Anno Domini 1692: in the fourth year of their Majes'ts Reigne:/

The s'd Martin & Tyler have given suffitient bond to prosecute s'd persons to effect, which bond remains with me:

(Reverse) [torn] In Obediance Two this warant I have aprehended the within Riten persons and have brought them to Salom the 29'th of August 1692 Before their honours mentined in the Rit:
pere me *Ephraim Foster
Constable of Andover 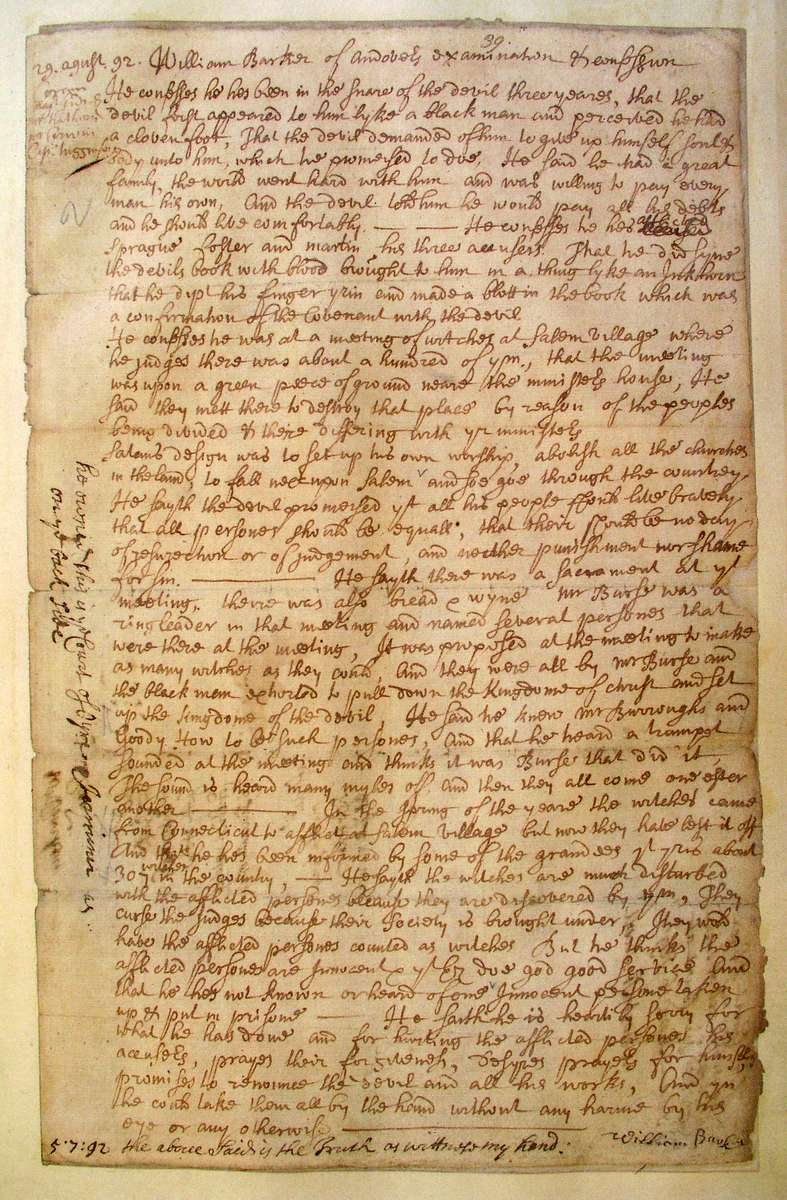 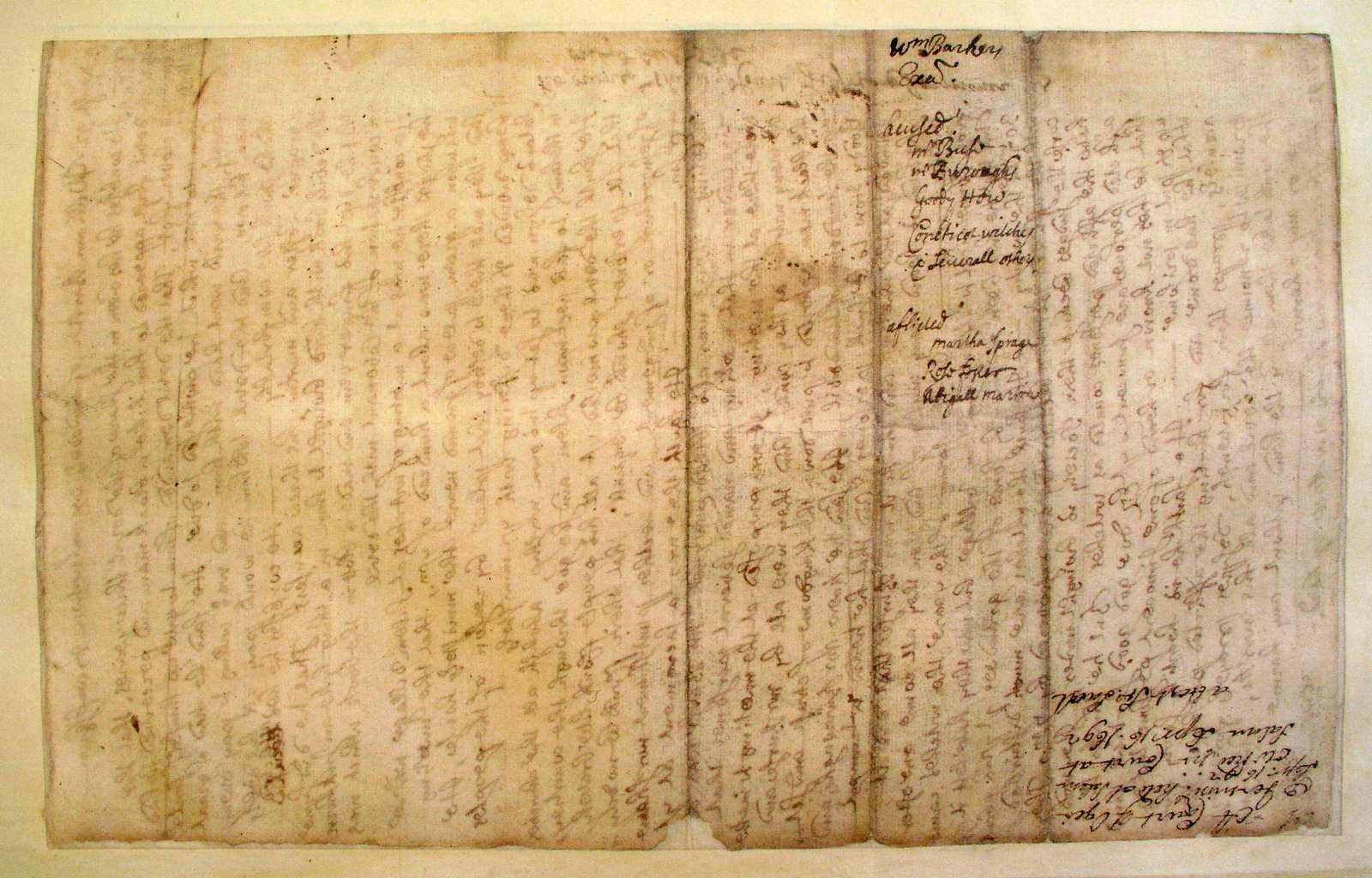 He confesses he hes been in the snare of the devil three yeares, that the devil first appeared to him lyke a black man and perceived he had a cloven foot, That the devil demanded of him to give up himself soul & Body unto him, which he promesed to doe, He said he had a great family, the world went hard with him and was willing to pay every man his own, And the devil told him he would pay all his debts and he should live comfortably. -- He confesses he hes afflicted #[?]sed Sprague foster and martin, his three accusers. That he did syne the devils book with blood brought to him in a thing lyke an Inkhorn that he dipt his finger therein and made a blott in the book which was a confirmation of the Covenant with the devil. He confesses he was at a meeting of witches at Salem Village where he judges there was about a hundred of them, that the meeting was upon a green peece of ground neare the ministe'rs house, He said they mett there to destroy that place by reason of the peoples being divided & theire differing with their ministe'rs

Satans design was to set up his own worship, abolish all the churches in the land, to fall next upon Salem and soe goe through the countrey, He sayth the devil promeised that all his people should live bravely that all persones should be equall; that their should be no day of resurection or of judgement, and neither punishment nor shame for sin. -- He sayth there was a Sacrament at that meeting, theire was also bread & wyne m'r Burse was a ringleader in that meeting and named several persones that were there at the meeting, It was proposed at the meeting to make as many witches as they could, And they were all by m'r Burse and the black man exhorted to pull down the Kingdome of christ and set up the Kingdome of the devil, He said he knew mr Burroughs and Goody How to be such persones, And that he heard a trumpet sounded at the meeting and thinks it was Burse that did it, The sound is heard many myles off, And then they all come one efter another -- In the spring of the yeare the witches came from Connecticut to afflict at Salem Village but now they have left it off And that he hes been informed by some of the grandees that there is about 307 witches in the country, -- He sayth the witches are much disturbed with the afflicted persones because they are discovered by them, They curse the judges because their Society is brought under, They wold have the afflicted persones count ed as witches But he thinks the afflicted persones are Innocent & that they doe god good service And that he hes not known or heard of one Innocent persone taken up & put in prisone -- He saith he is heartily sorry for what he has done and for hurting the afflicted persones his accuse'rs, prayes their forgiveness, desyres praye'rs for himself, promises to renounce the devil and all his works, And then he could take them all by the hand without any harme by his eye or any otherwise 5.7:92 the above Said is the Truth as wittnese my hand: -- * William Barker ---

29 August 1692 Wm Barker Sen'r of Andivers Examination & Confession
Before Maj'r Gidney M'r Hathorne M'r Corwine Jn'o Higginson Esq'rs
He Confesses he has been in the Snare of the Divel @ Three Years that the Divel first apeared to Her in the Shape of a black man & perceived he had a Cloved foott that the Divel demand of him to give up himself Soul & body to him w'ch he promised to doe he Said he had a greate family the world went hard w'th him & was willing to pay Every Man his owne & the Divel told him he would pay all his Debts & he Should live Comfortably He Confesses he has afflicted Sprauge fostter & Martin his three akusers that he did Sign the Divel book w'th blood brought to him In a thing like an Inkhorn that he dipt his finger therin and made a bloot #[therein] in the book w'ch was a Confermation of the Covenant Made w'th the divel -- He Confesses he was at a metting of the witches at Salem Village where he Judges there was about a hundred of them that the Metting was Upon a green peice of ground Near the Ministers house he Says they Meet their to destroy that place by reason of the peoples being devided & their differing w'th there Ministers -- Satans desire was to Sett up his one worship, abolish all the Churches in the Land to fall next Upon Salem & Soe goe through the Country he Saith the Divel promised al his people Should live Bravely that al p'rsons Should be Equal that their Should be no day of resurection or Judgment And Nither Punishment nor Shame for Sin -- he Saith their was a Sacrement at the Metting there was also bread & wine M'r Burseughs was a Ring Leader in that Metting & Named Several p'rsons that ware there at the Metting It was proposed at the Metting to Make as Many witches as they Could & they were al by M'r Burse #(ughs) & the black Man Exhorted to pull dwone ye Kingdome of of Christ & Sett Up the Kingdome of the Divel, He S'd he knew M'r Burooughs & Goode How to be Such p'rsons & that he heard a trumpet Sounded at the Metting & thinks it Was Burse that did it the Sound is heard Many miles of and then they all Come one after another -- In the Spring of the Year the witches Came from Connecticut to afflict at Salem Village butt now they have left it of, & that he has been In- formed by Some of the Grandees that there is @ 307 witches in the Country
He Saith the witches are much disturbed w'th the afflicted p'rsons because they are Discovered by them, they Curse the Judges because their Society is brought under they would have the afflicted p'rsons Counted as witches but hee thinks they the afflicted p'rsons are Inocent & that they doe god good Service & that he has not knowne or heard of one Inocent p'rson taken up And "Yett putt In prison -- he Saith he is hartyly Sorry for w't he has done & for hurting the afflicted p'rsons his accusers, prays there forgivenes: desire prayers for him Self promises to Renounce the Divel & al his works & then he could take them all by the hand w'thout any harme by his Eye or otherwise the above S'd is the truth as wittnese my hand * William Barker

(Confession from Prison of William Barker, Sr., as Recorded by John Hale )

God having called me to Confess my sin and Apostasy in that fall in giving the Devil advantage over me appearing to me like a Black, in the evening to set my hand to his Book, as I have owned to my shame. He told me that I should not want so doing. At Salem Village, there being a little off the Meeting-House, about an hundred five Blades, some with Rapiers by their side, which was called and might be more for ought I know by B and Bu[rroughs] and the Trumpet sounded, and Bread and Wine which they called the Sacrament, but I had none; being carried all over on a Stick, never being at any other Meeting. I being at Cart a Saturday last, all the day, of Hay and English Corn, the Devil brought my Shape to Salem, and did afflict M[artha] S[prague] and R[ose] F[oster] by clitching my hand; and a Sabbath day my Shape afflicted A[bigail] M[artin] and at night afflic- ted M[artha] S[prague] and A[bigail] M[artin] . E[lizabeth] J[ohnson ] and A[bigail] F[aulkner] have been my Enticers to this great abomination, as one have owned and charged her to her Sister with the same. And the and then all will be well. And now I hope God in some measure has made me something sensible of my sin and apostasy, begging pardon of God, and of the Honourable Magistrates and all Gods people, hoping and promising by the help of God, to set to my heart and hand to do what in me lyeth to destroy such wicked worship, humbly begging the prayers of all Gods People for me, I may walk humbly under this great affliction and that I may procure to my self, the sure mercies of David, and the blessing of Abraham. 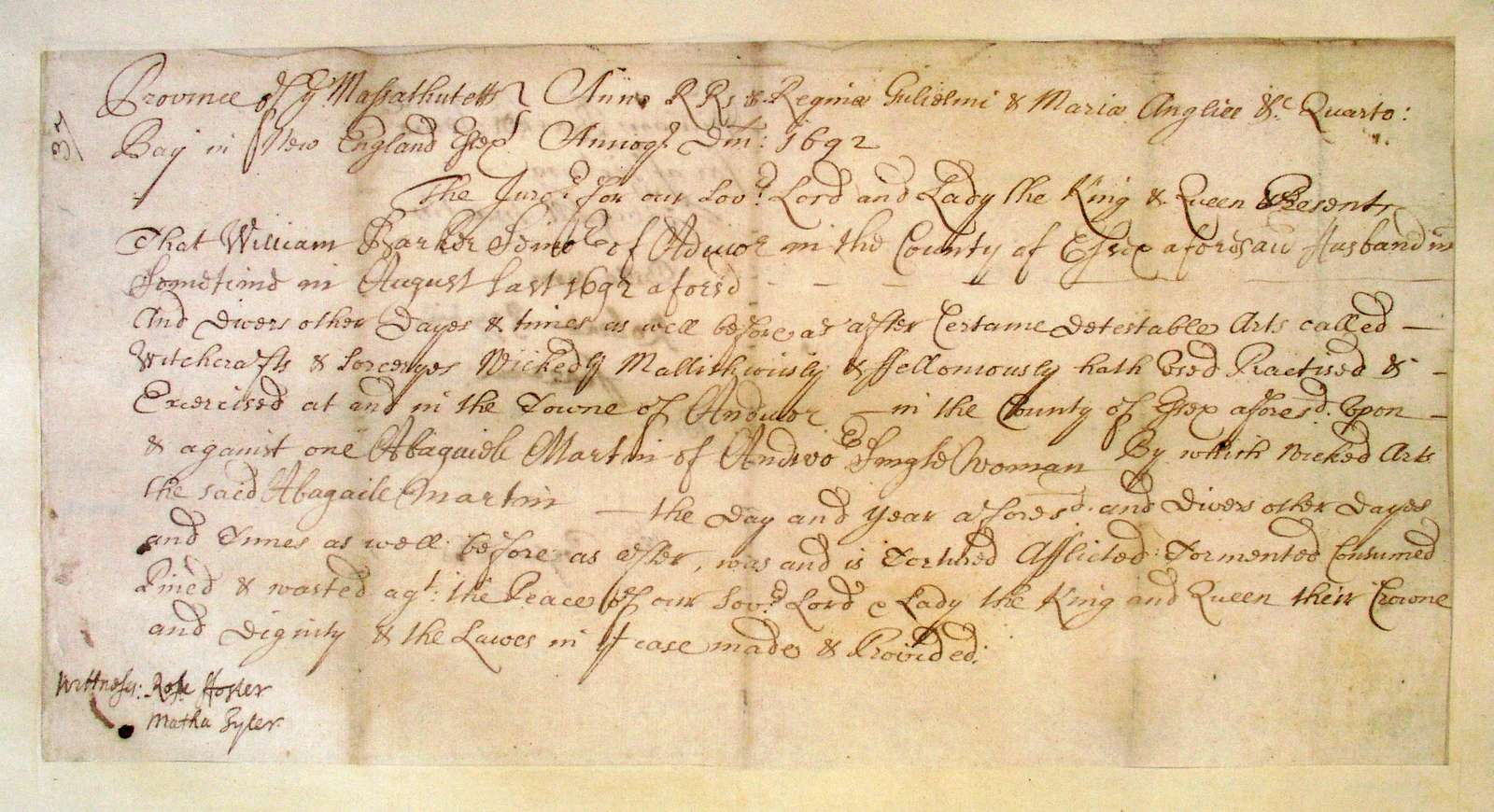 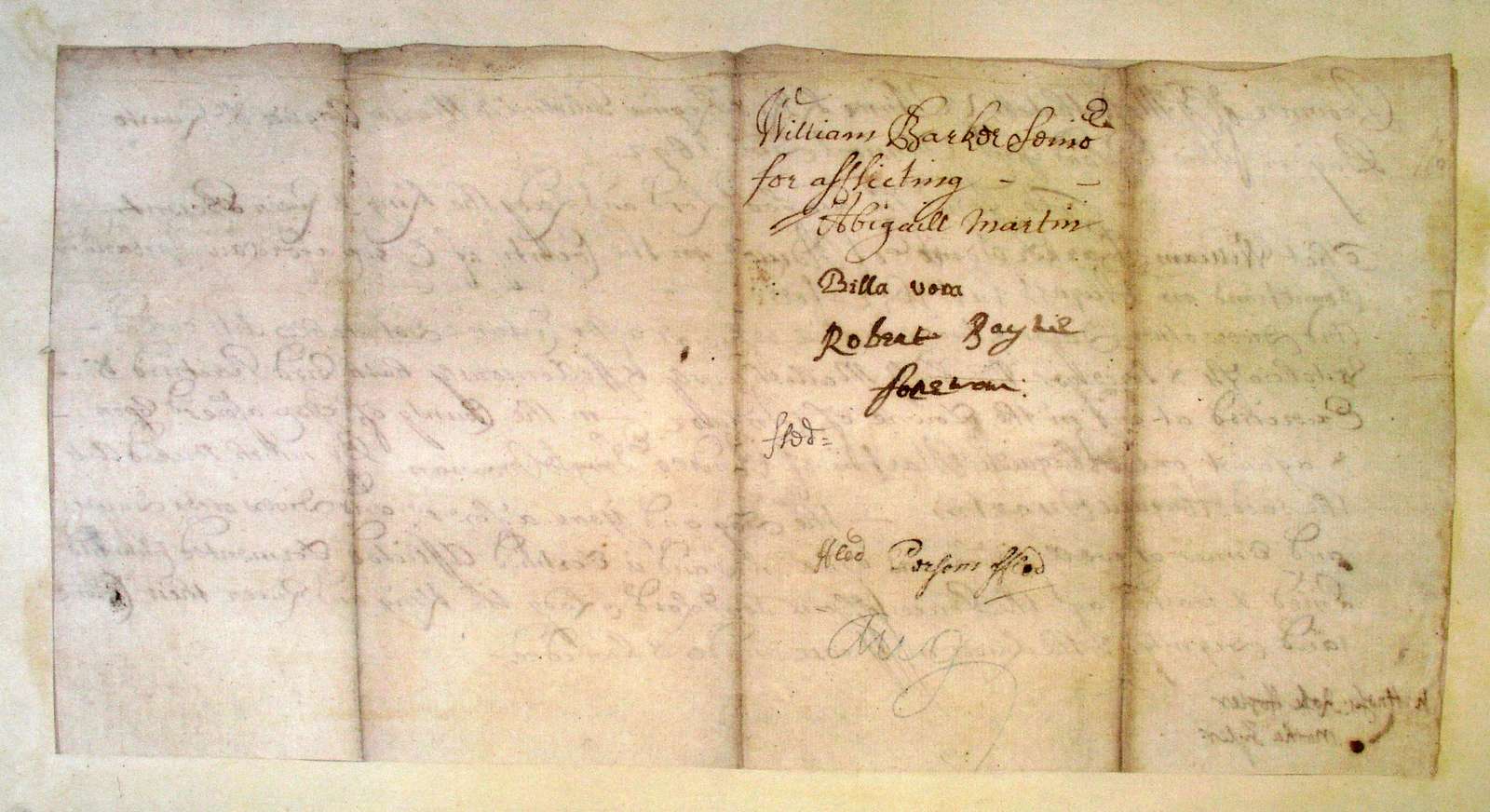 The Juro'r for our Sov'r Lord and Lady the King & Queen Presents That William Barker Seino'r of Adivor in the County of Essex afore- said Husbandm Sometime in August last 1692 afors'd - - - - - And Divers other Dayes & times as well before as after Certaine Detestable Arts called Witchcrafts & Sorceryes Wickedly Mallishiously & feloniously hath used Practised & Excercised at and in the Towne of Andivor -- in the County of Essex afores'd upon & against one Abagaiele Martin of Andivo'r Single Woman By which Wicked Arts the said Abagaill Martin -- the Day and Year afores'd and Divers other Dayes and Times as well before as after, was and is Tortured Afflicted. Tormented Consumed Pined & wasted ag't the Peace of Sov'r Lord & Lady the King and Queen their Crowne and Dignity & the Lawes in that case made & Provided:
Wittnesses: Rose foster --
Matha Tyler 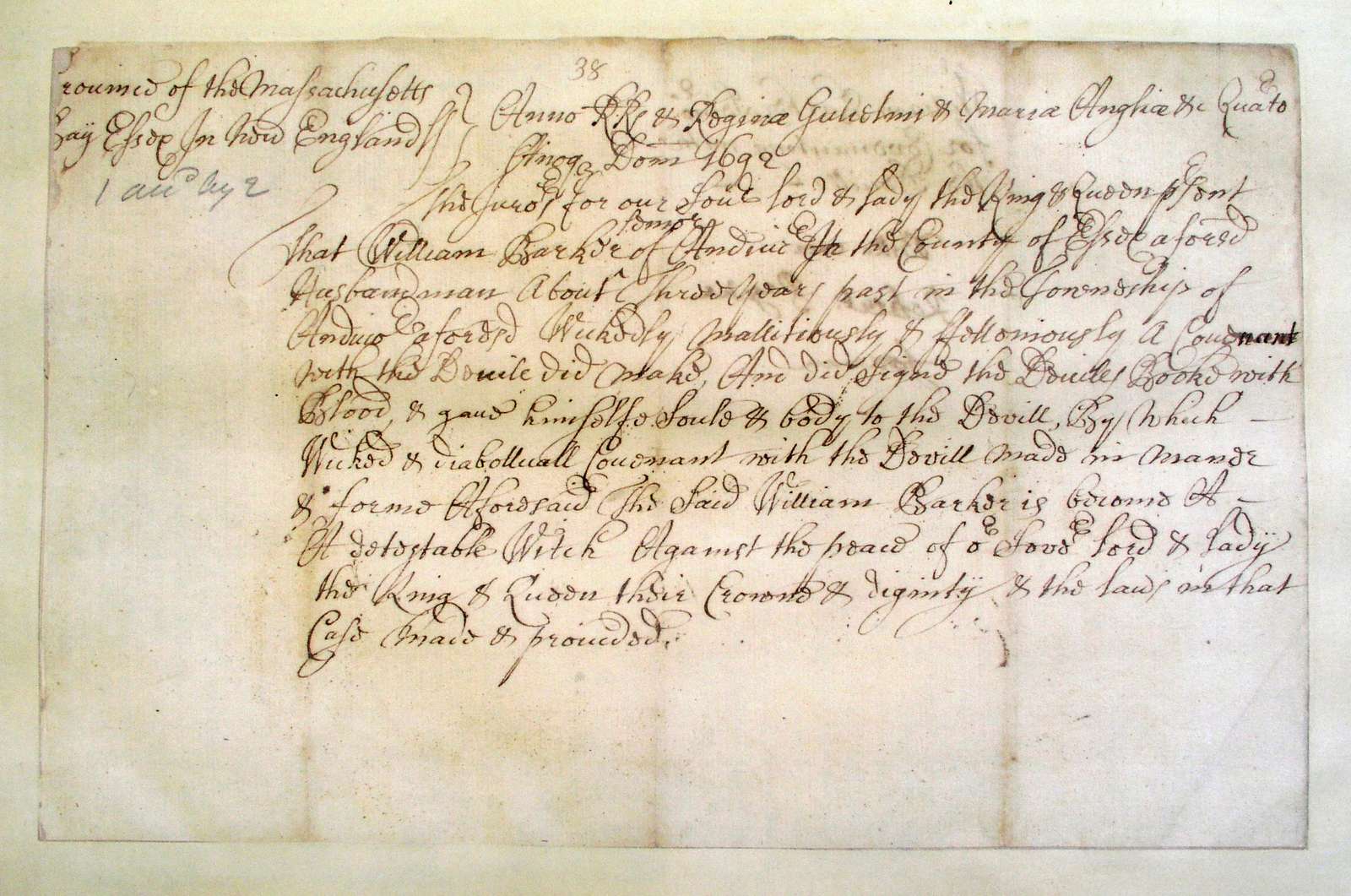 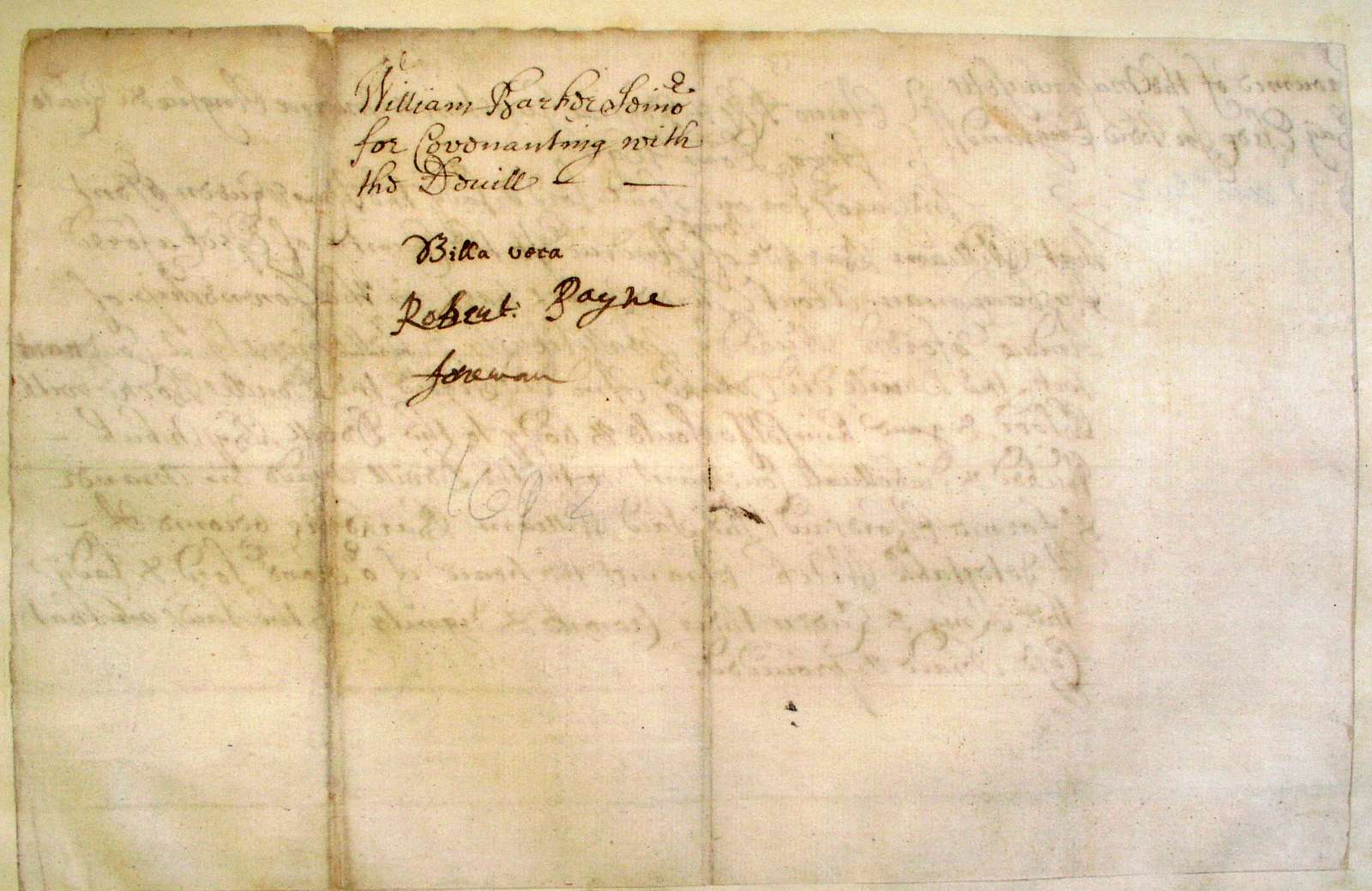 Province of the Massachusetts Bay Essex In New England ssAnno RR's & Reginae Gulielmi & Mariae Angliae &c Qua'rto Anoq'e Dom 1692
The Juro'rs for our Sov'r lord & lady the King & Queen p'rsent That William Barker senior of Andivo'r In the County of Essex aforsd Husbandman About Three years past in the Towneship of Andivo'r aforesd Wickedly mallitiously & felloniously A Covenant with the Devill did make, And did Signe the Devills Booke with Blood, & gave himselfe Soule & body to the Devill, By which Wicked & diabollicall Covenant with the Devill made in maner & forme Aforesaid The Said William Barker is become A A detestable Witch Against the peace of o'r Sove'r lord & Lady the King & Queen their Crowne & dignity & the laws in that Case made & provided.