To the Constables in Salem

You are in theire Majests names hereby required to Apprehend and bring before us on Tuesday next being the seaventeenth day of this Instant moneth of May aboute ten of the Clock in the forenoon at the house of L't Natha[nbar ] ll Ingersons of Salem Village, Daniell Andrew of Salem Village Bricklayer. George Jacobs Jun'r of Salem Village husbandman And Rebecka Jacobs the wife of said George Jacobs and Sarah Buckley the wife of W'm Buckley of Salem Village Cord wayner, And Mary withridge the daugter of sayd Buckley. who all stand Charged in behalfe of theire Majesties with high Suspition of Sundry acts of Witchcrafts by them donne or Committed on the Bodys of Ann putnam Marcy Lewis Mary Walcot and Abigail Williams and Others of Salem Village (Lately) whereby hurt hath been donn them. And hereof you are not to faile

(Reverse) In prosecution of this warant
I have apprehended and brought the bodyes of
Sarah Buckley and Marye Withredg and
Rebekah Jacobs all of Salem velage according to the tener
of the within written warrant: and have Likewise made
delegant sarch at the house of Daniell Andrew and
at the house of Georg Jacobs for them Likewise but cannot find them

(Indictment of Rebecca Jacobs, for Covenanting)

(Reverse) Indictm't: Agst Rebeckah Jacobs for
Covenanting with the Devil 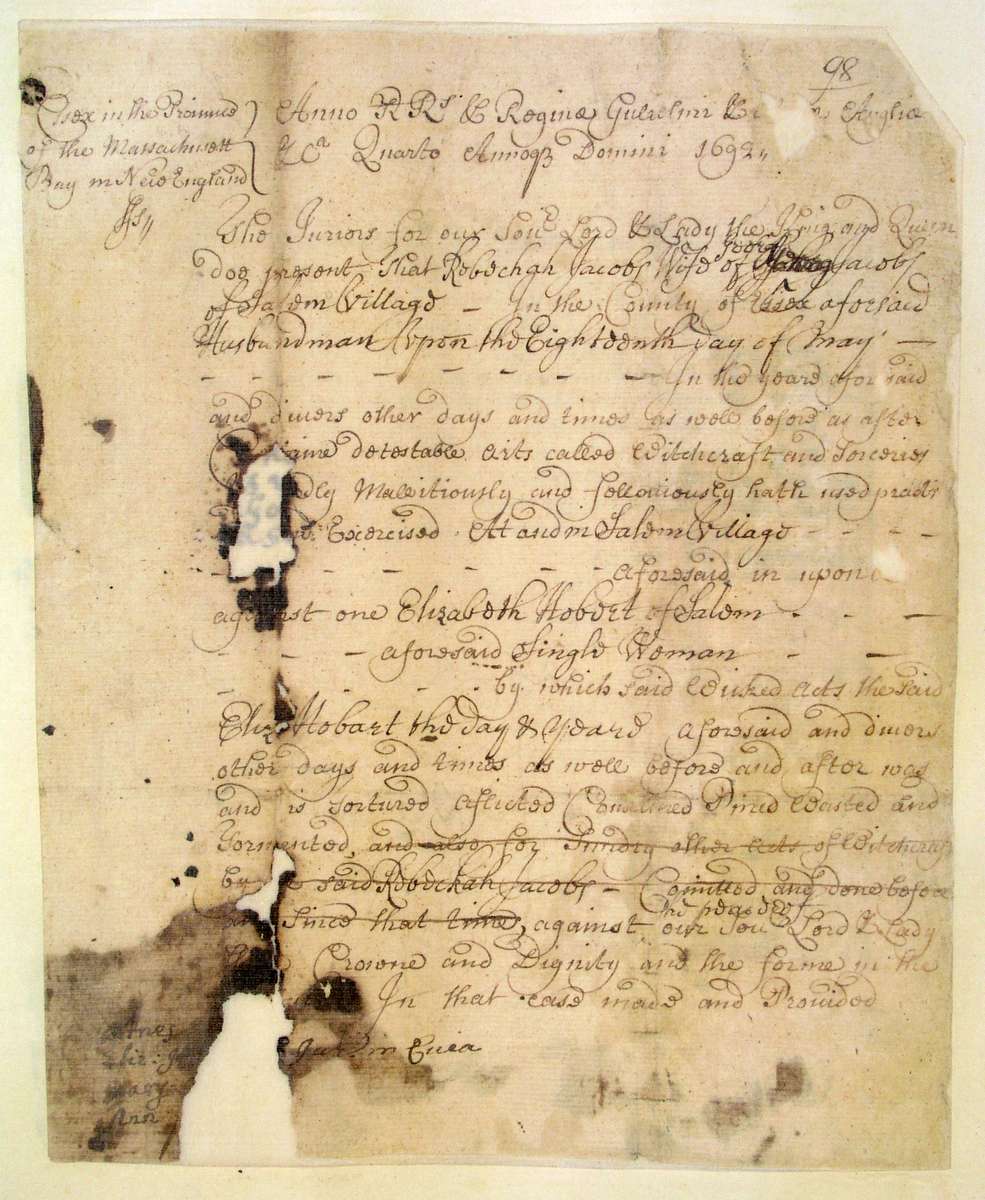 The deposistion of Eliz Hubbred who testifieth and saith that one the begining of may 1692 I was afflected by Rebecah Jacobs the wife of George Jacobs but on the 18.th may 1692 being the day of hir examination I saw Rebekah Jacobs or hir Apperanc most greviously afflet mary walcott Abigail williams and Ann putnam: tho when she began to confes she left ofe hirting of us but severall times sence that she has most greviously affleted me and I beleve in my heart that Rebecka Jacobs is a wicth and that she has often affleted me and the afforesaid parsons by acts of wicthcraf.

Eliz Hubbard ownd: the truth of the above written evdence: before the Jury of Inques. Sept 10: 1692

That Whereas Rebeccah Jacobs (daughter to the Humble Petitioner ) has long lyen in Prison for Witchcraft, & she at some times has uttered hard words of her self as tho she had killed her Child, which words are much accounted of as is famed

These may acquaint your Hon'r that the s'd Rebeccah Jacobs is a Woman broken & distracted in her mind, & that she has been so at times above these 12 Years, & this I am ready to take my oath to, & I can bring several Others that will do the Same & therefore

Your Humble Petitioner thought her self bound in Conscience for your Hon'rs informatio to declare the same to Your Hon'r & Prays that due regard may be had thereto, that so there may not be stresse laid on the Confession of a Distracted Woman to the Prejudice of her life; So not doubting of your Hon'r's Integrity in this Matter Your Petitioner prays to God Almighty, that Wisedome may not be witholden from your Hon'r. who is Wise, & subscribes her Self
Hon'ble S'r
Your Hon'r's Dutiful Servat
and
Humbl Petition'r
Rebecca Fox

(Reverse) Rebecca Fox on behalf of Rebecca Jacobs her daughter 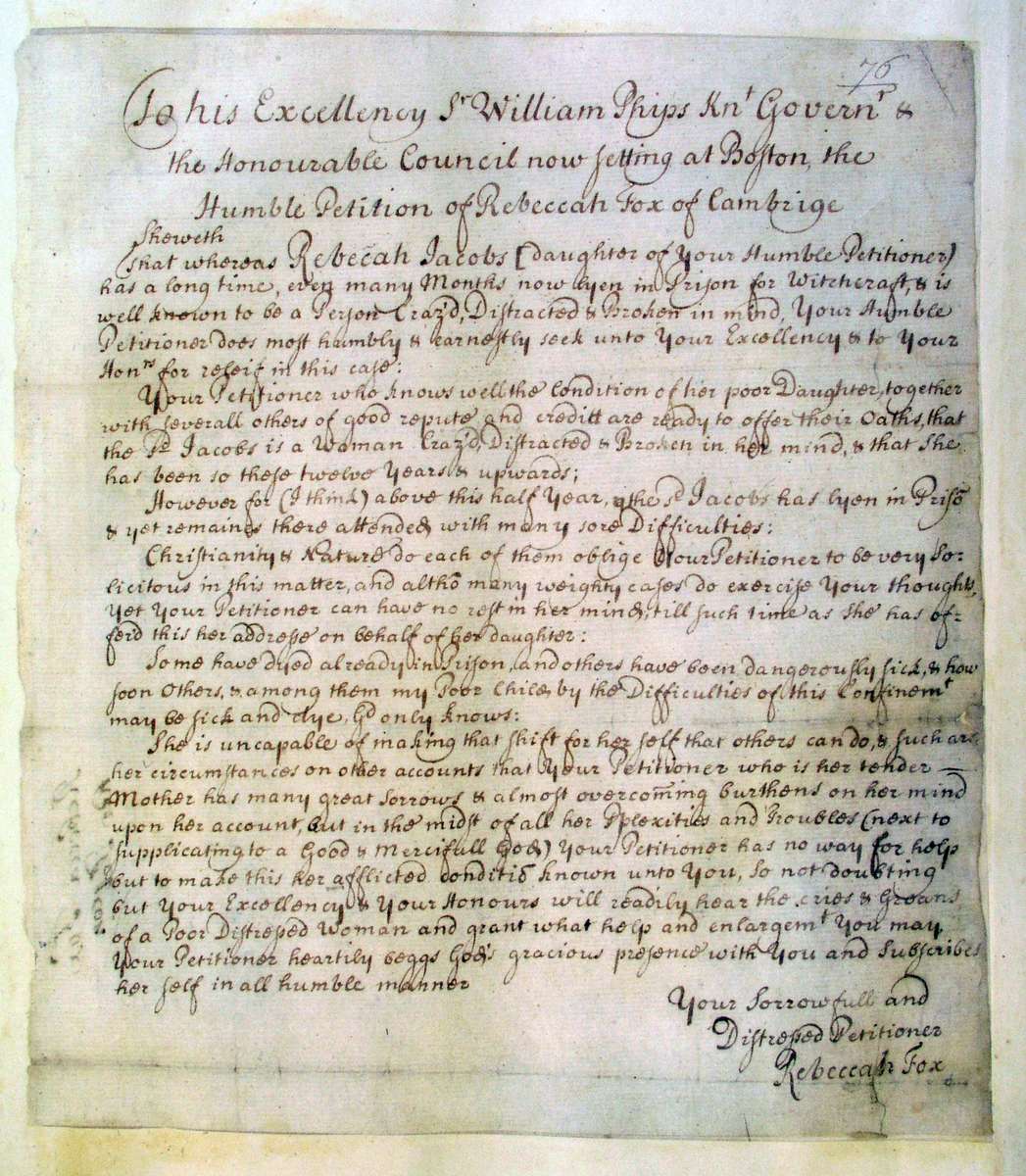 To his Excellency S'r William Phips Kn't Govern'r & the Honourable Council now setting at Boston, the Humble Petition of Rebeccah Fox of Cambridge

that whereas Rebecah Jacobs (daughter of your Humble Petitioner ) has a long time, even many Months now lyen in Prison for Witchcraft, & is well known to be a Person Craz'd Distracted & Broken in mind, Your Humble Petitioner does most humbly & earnestly seek unto Your Excellency & to Your Hon'rs for releif in this case:

Your Petitioner who knows well the Condition of her poor Daughter, together with severall others of good repute and creditt are ready to offer their Oaths, that the s'd Jacobs is a Woman Craz'd, Distracted & Broken in her mind, & that She has been so these twelve Years & upwards;

However for (I think) about this half Year the s'd Jacobs has lyen in Pris'n & yet remaines there attended with many sore Difficulties:

Christianity & Nature do each of them oblige Your Petitioner to be very Solicitous in this matter, and altho many weighty cases do exercise Your thoughts, Yet Your Petitioner can have no rest in her mind, till such time as she has offer'd this her addresse on behalf of her daughter:

Some have dyed already in Prison, and others have been dangerously sick, & how soon Others, & among them my Poor Child, by the Difficulties of this Confinem't may be sick & dye, G'd only knows:

She is uncapable of making that shift for her self that others can do, & such are her circumstances on other accounts that Your Petitioner who is her tender Mother has many great Sorrows & almost overco[mbar ]ing burthens on her mind upon her account, but in the midst of all her p'rplexities and troubles (next to supplicating to a Good & Mercifull God) Your Petitioner has no way for help but to make this her afflicted conditi[obar ] known unto You, So not doubting but Your Excellency & Your Honours will readily hear the cries & Groans of a Poor Distressed Woman and grant what help and enlargem't You may Your Petitioner heartily beggs God's gracious presence with You and Subscribes her self in all humble manner
Your Sorrowfull and Distressed Petitioner Rebeccah Fox