Mrs. Osgood freely and relentingly said, that the confession which she made upon her examination for witchcraft, and afterwards acknowledged before the honourable judges, was
wholly false, and that she was brought to the said confession by the violent urging and
unreasonable pressings that were used toward her; she asserted that she never signed to the
devill’s book, was never baptised by the devill, never afflicted any of the accusers, or gave her
consent for their being afflicted. Being asked, why she prefixed a time and spake of her being
baptised, &c.: about twelve years since; she replyed, and said, that when she had owned the
thing, they asked the time; to which she answered, that she knew not the time; but being
told that she did know the time and must tell the time, and the like; she considered that
about twelve years before (when she had her last child) she had a fitt of sicknesse, and was
melancholy; and so thought that that time might be as proper a time to mention as any, and
accordingly did prefix the said time.

Being asked about the cat, in the shape of which she had confessed the devill appeared to
her, &c. she replyed, that being told that the devill had appeared to her, and must needs
appear to her, &c. (she being a witch) she at length did own that the devill had appeared to
her; and being press’d to say in what creature’s shape he appeared in, she at length did say,
that it was in the shape of a cat; remembering that some time before her being apprehended,
as she went out at her door, she saw a cat, &c.: not as though she any whitt suspected the
said cat to be the devill in the day of *** but because some creature she must mention, and
this came thus into her mind at that time.

Deacon Fry’s wife said, that the confession she made she was frighted into, and that it
was all of it false.

Mrs. Dean and Goodwife Barker said freely, that they had wronged the truth in making
their confession; that they in their lives time never covenanted with the devill, or had seen
him; that they were press’d, and urg’d, and affrighted; that at last they did say even any thing
that was desired of them; they said that they were sensible of their great evill in giving way at
last to own what was false, and spake all with such weeping, relenting, and bleeding, as was
enough to affect the hardest heart; particularly G. Barker bewail’d and lamented her accusing
of others, whom she never knew any evill by in her life time; and said that she was told by her
examiners that she did know of their being witches and must confesse it; that she did know of
their being baptised, &c.: and must confesse it; by the renewed urgings and chargings of whom at last she gave way, and owned such things as were utterly false, which now she was
in great horrour and anguish of soul for her complying with.

Goodwife Tyler did say, that when she was first apprehended, she had no fears upon her,
and did think that nothing could have made her confesse against herself; but since, she had
found to her great grief, that she had wronged the truth, and falsely accused herself: she said,
that when she was brought to Salem, her brother Bridges rode with her, and that all along
the way from Andover to Salem, her brother kept telling her that she must needs be a witch,
since the afflicted accused her, and at her touch were raised out of their fitts, and urging her
to confess herself a witch; she as constantly told him, that she was no witch, that she knew
nothing of witchcraft, and begg’d of him not to urge her to confesse; however when she came
to Salem, she was carried to a room, where her brother on one side and Mr. John Emerson
on the other side did tell her that she was certainly a witch, and that she saw the devill before
her eyes at that time (and accordingly the said Emerson would attempt with his hand to beat
him away from her eyes) and they so urged her to confesse, that she wished herself in any
dungeon, rather than be so treated: Mr. Emerson told her once and again, Well! I see you
will not confesse! Well! I will now leave you, and then you are undone, body and soul
forever: Her brother urged her to confesse, and told her that in so doing she could not lye; to
which she answered, Good brother, do not say so, for I shall lye if I confesse, and then who
shall answer unto God for my lye? He still asserted it, and said that God would not suffer so
many good men to be in such an errour about it, and that she would be hang’d, if she did not
confesse, and continued so long and so violently to urge and presse her to confesse, that she
thought verily her life would have gone from her, and became so terrifyed in her mind, that
she own’d at length almost any thing that they propounded to her; but she had wronged her
conscience in so doing, she was guilty of a great sin in belying of herself, and desired to
mourn for it as long as she lived: This she said and a great deal more of the like nature, and
all of it with such affection, sorrow, relenting, grief, and mourning, as that it exceeds any pen
for to describe and expresse the same.

Goodwife Bridges said, that she had confessed against herself things which were all
utterly false, and that she was brought to her confession by being told that she certainly was a
witch, and so made to believe it, though she had no other grounds so to believe.

Goodwife Marston said, that she had a burthen upon her conscience, and that she had
been burthened ever since she had made her confession, for she had wronged the truth and
belyed herself; she never was guilty of witchcraft, or having to do with the devill (as she knew
of) in her life time.

Sarah Churchill knew not whether it was in the day time or night time, that she stuck
the thorns in the three poppets.

Hannah Post said, that Margaret Jacobs was choking of S. Ch. and that she appeared as
little as a child of two years old.

Mary Post told the old story of her spirit’s riding upon the rail; but ***** 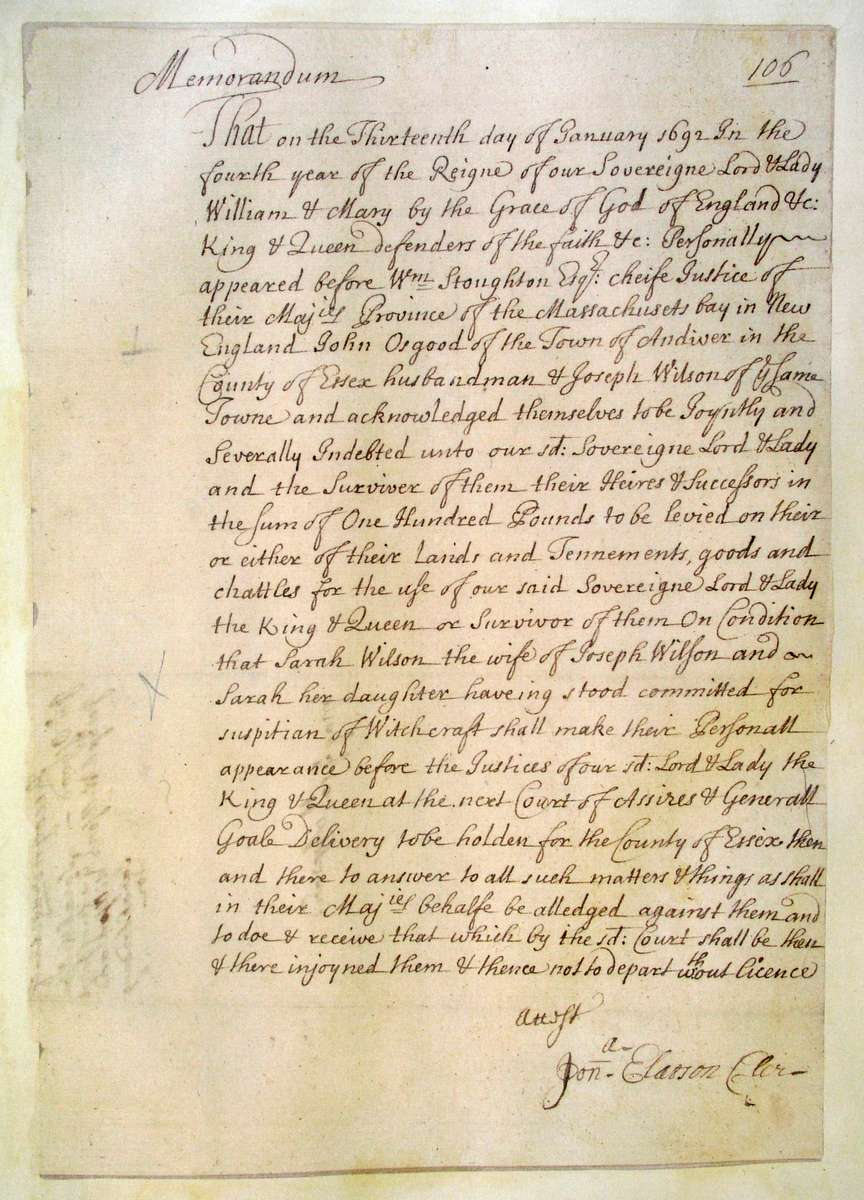 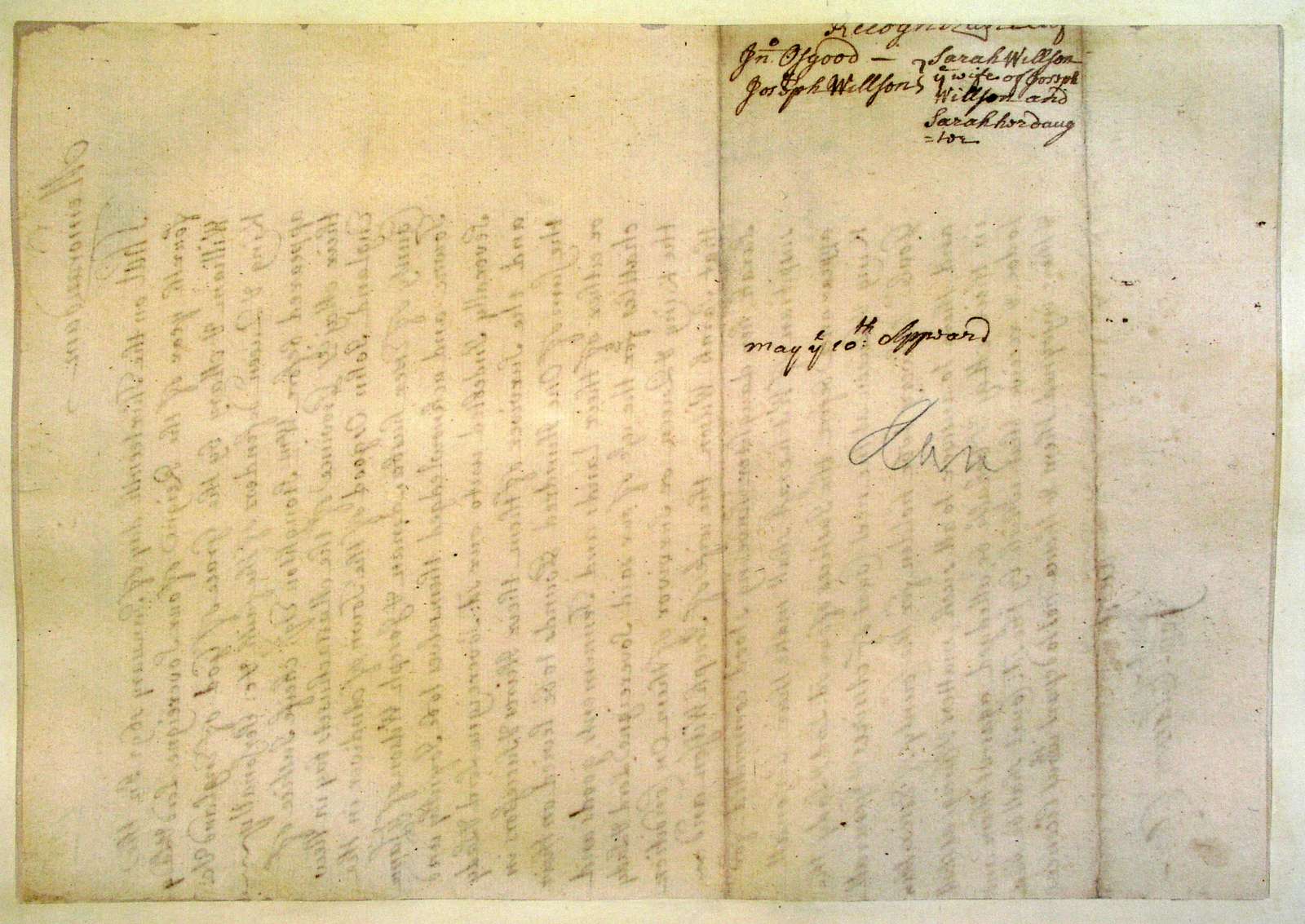 That on the Thirteenth day of January 1692 In the fourth year of the Reigne of our Sovereigne Lord & Lady William & Mary by the Grace of God of England &c: King & Queen defenders of the faith &c: Personally appeared before W'm Stoughton Esq'r cheife Justice of their Maj'ies Province of the Massachusets bay in New England John Osgood of the Town of Andiver in the County of Essex husbandman & Joseph Wilson of the same Towne and acknowledged themselves to be Joyntly and Severally Indebted unto our s'd Sovereigne Lord & Lady and the Surviver of them their Heires & Successors in the sum of One Hundred Pounds to be levied on their or either of their Lands and Tennements, goods and chattles for the use of our said Sovereigne Lord & Lady the King & Queen or Survivor of them On Condition that Sarah Wilson the wife of Joseph Wilson and Sarah her daughter haveing stood committed for suspitian of Witchcraft shall make their Personall appearance before the Justices of our s'd Lord & Lady the King & Queen at the next Court of Assizes & Generall Goale Delivery to be holden for the County of Essex then and there to answer to all such matters & things as shall in their Maj'ies behalfe be alledged against them and to doe & receive that which by the s'd Court shall be then & there injoyned them & thence not to depart w'th out licence

Sarah Willson the wife of Joseph Willson and Sarah her daughter

may the 10th Appeard