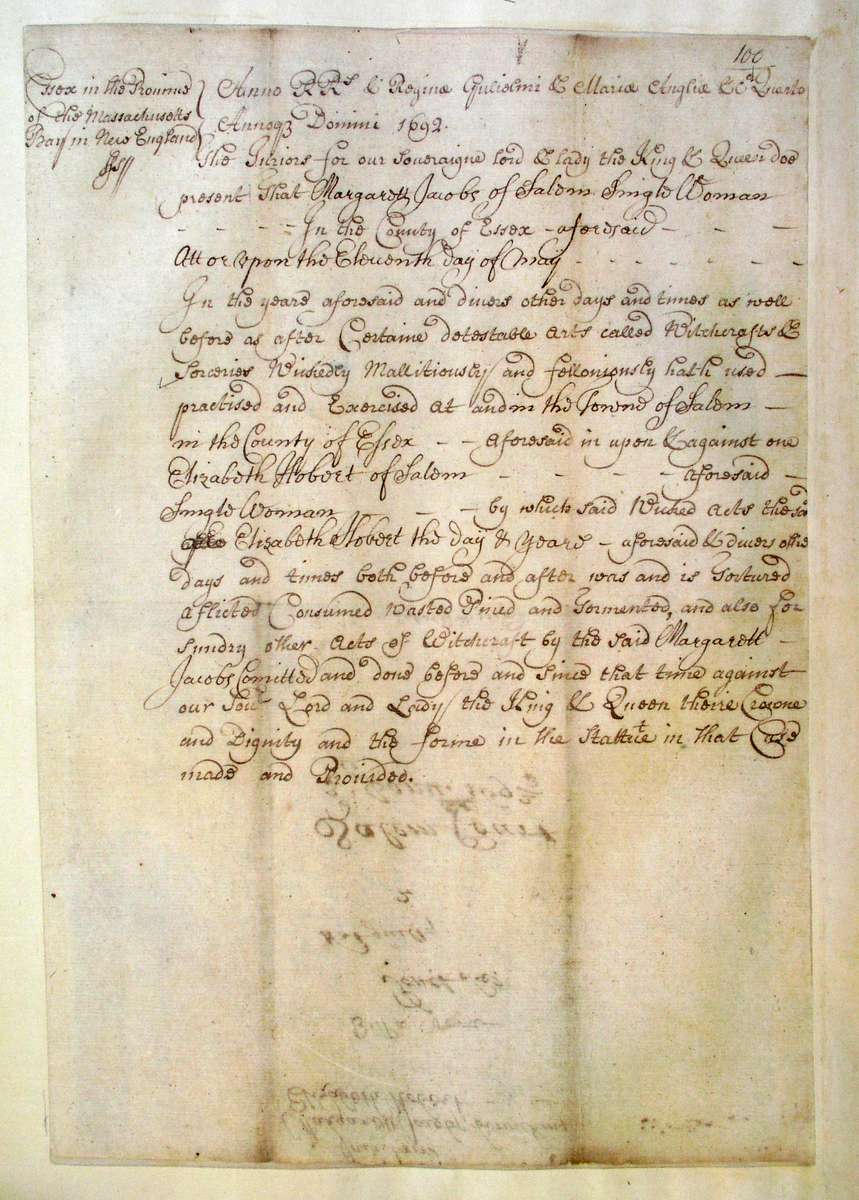 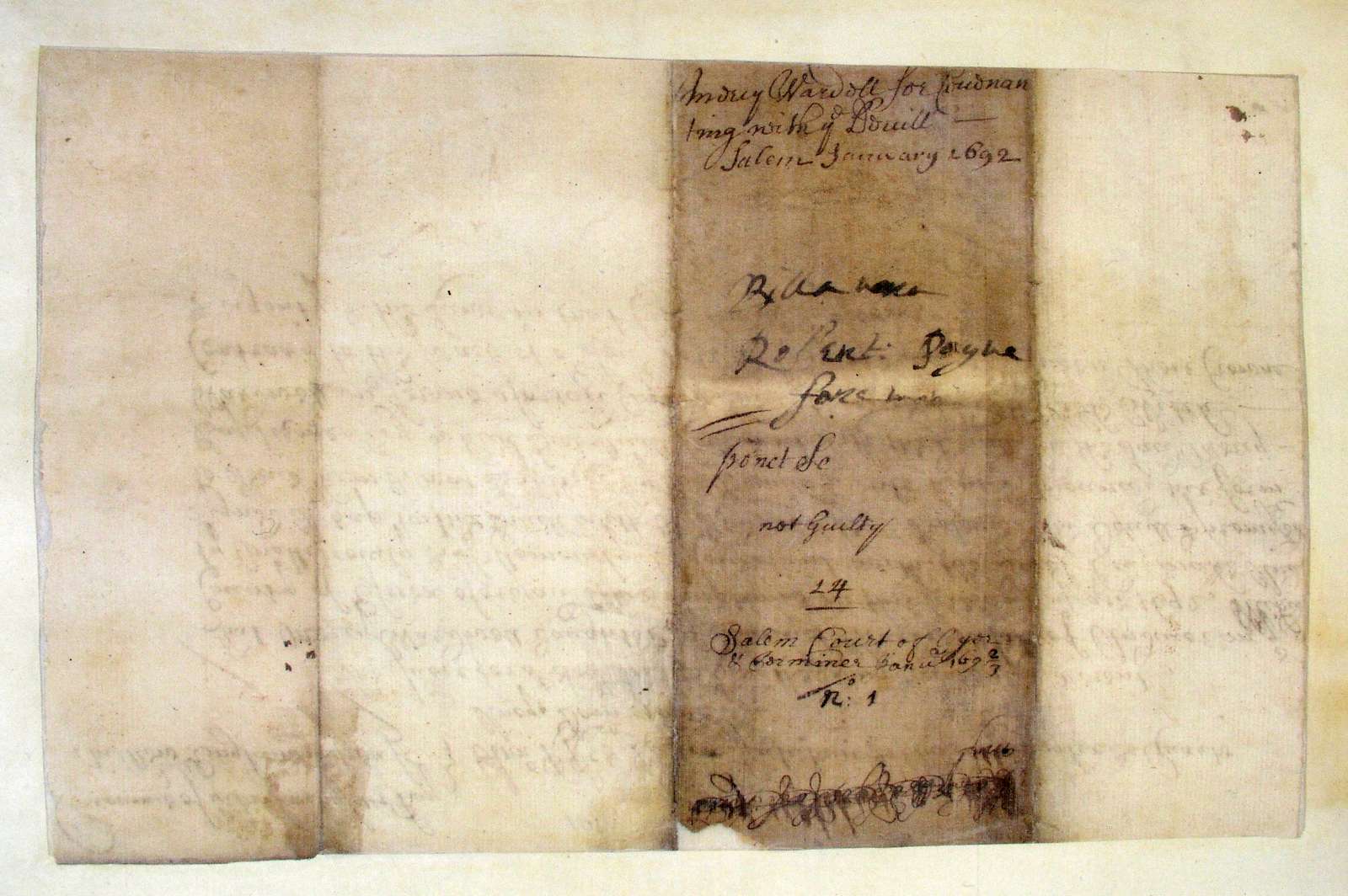 The Juriors for our Soveraigne Lord & Lady the King & Queen doe present That Margarett Jacobs of Salem Single Woman -- In the County of Essex -- aforesaid -- Att or upon the Eleventh day of Maÿ -- In the yeare aforesaid and divers other days and times as well before as after Certaine detestable Arts called Witchcrafts & Sorceries Wickedly Mallitiously and felloniously hath used practised and Exercised at and in the Towne of Salem -- in the County of Essex -- Aforesaid in upon & against one Elizabeth Hobert of Salem -- Aforesaid -- Single Woman -- by which said Wicked Acts the said Elizabeth Hobert the day & yeare -- aforesaid & divers other days and times both before and after was and is Tortured aflicted Consumed Wasted Pined and Tormented, and also for sundry other Acts of Witchcraft by the Said Margarett Jacobs Comitted and done before and Since that time against our Sov'r Lord and Lady the King & Queen theire Crowne and Dignity and the forme in the Stattute in that Case made and Provided.

The testomeny of John derech Eaged about sixten years testifieth and Sayeth that Margat Jacobs Came and aflicted me this 5 of September as she hath many tims before She al so teleth me that she will kill me if #[she] I woul not yeld to hur she al so bringeth the book to me tempen me to set my hand to it she teleth me that i shal be wel if i will set my hand to the book she teleth me that She will run a scuer thoraw me and #[thre] threteneth me to Cut me with a knife beger than an ordnery knife is as #[he] she hath don worse before.

( Letter of Margaret Jacobs to George Jacobs, Jr., from Prison )

From the Dungeon in Salem-Prison, August 20. 92.
Honoured Father,

After my Humble Duty Remmbered to you, hoping in the Lord of your good Health, as Blessed be God I enjoy, tho in abundance of Affliction, being close Confined here in a loathsome Dungeon, the Lord look down in mercy upon me, not knowing how soon I shall be put to Death, by means of the Afflicted Persons; my Grand-Father having Suffered already, and all his Estate Seized for the King. The reason of my Confinement is this, I having, through the Magistrates Threatnings, and my own Vile and Wretched Heart, confessed several things contrary to my Conscience and Knowledg, tho to the Wounding of my own Soul, the Lord pardon me for it; but Oh! the terrors of a wounded Conscience who can bear. But blessed be the Lord, he would not let me go on in my Sins, but in mercy I hope so my Soul would not suffer me to keep it in any longer, but I was forced to confess the truth of all before the Magistrates, who would not believe me, but tis their pleasure to put me in here, and God knows how soon I shall be put to death. Dear Father, let me beg your Prayers to the Lord on my behalf, and send us a Joyful and Happy meeting in Heaven. My Mother poor Woman is very Crazey, and remembers her kind Love to you, and to Uncle, viz. D. A. So leaving you to the protection of the Lord, I rest your Dutiful Daughter, Margaret Jacobs.

The humble declaration of Margaret Jacobs unto the honoured court now sitting at Salem, sheweth

That whereas your poor and humble declarant being closely confined here in Salem goal for the crime of witchcraft, which crime thanks be to the Lord I am altogether ignorant of, as will appear at the great day of judgment: May it please the honoured court, I was cried out upon by some of the possessed persons, as afflicting them; whereupon I was brought to my examination, which persons at the sight of me fell down, which did very much startle and affright me. The Lord above knows I knew nothing, in the least measure, how or who afflicted them; they told me, without doubt I did, or else they would not fall down at me; they told me, if I would not confess, I should be put down into the dungeon and would be hanged, but if I would confess I should have my life; the which did so affright me, with my own vile wicked heart, to save my life; made me make the like confession I did, which confession, may it please the honoured court, is altogether false and untrue. The very first night after I had made confession, I was in such horror of conscience that I could not sleep for fear the devil should carry me away for telling such horrid lies. I was, may it please the honoured court, sworn to my confession, as I understand since, but then, at that time, was ignorant of it, not knowing what an oath did mean. The Lord, I hope, in whom I trust, out of the abundance of his mercy, will forgive me my false forswearing myself. What I said, was altogether false against my grandfather, and Mr. Burroughs , which I did to save my life and to have my liberty; but the Lord, charging it to my conscience, made me in so much horror, that I could not contain myself before I had denied my confession, which I did though I saw nothing but death before me, chusing rather death with a quiet conscience, than to live in such horror, which I could not suffer. Where, upon my denying my confession, I was committed to close prison, where I have enjoyed more felicity in spirit, a thousand times, than I did before in my enlargement.

And now, may it please your honours, your declarant, having, in part, given your honours a description of my condition, do leave it to your honours pious and judicious discretions, to take pity and compassion on my young and tender years, to act and do with me, as the Lord above and your honours shall see good, having no friend, but the Lord, to plead my cause for me; not being guilty in the least measure of the crime of witchcraft, nor any other sin that deserves death from man; and your poor and humble declarant shall for ever pray, as she is bound in duty, for your honours happiness in this life and eternal felicity in the world to come. So prays your honours declarant.
Margaret Jacobs.