(Warrant for apprehension of Frances Hutchins and Ruth Wilford, and Officer's Return )

Essex/ To the Constable of Haverhill

Complaint being made to me this day, by Timothy Swan of Andover: & Mary Wallcott & Anna Putnam of Salem Village, Against Mrs: frances Hutchins & Ruth Willford , of Haverhill that the s'd frances Hutchins & Ruth Willford , hath sorely afflicted them, the s'd Timothy Swan Mary Walcott & Anna Putnam in their bodies, by witchcraft Severall times Contrary to the Peace of o'r: Sovereigne Lord & Lady King William & Queen Mary, of England &c: & to their Majests Law in that Case provided: & s'd Timothy Swan having, according to Law, given sufficient bond, to Prosecute s'd Complaint, before Their Majests: justices of Peace att Salem the 19th: or 20th Instant.

These therefore require you in their Majests names to Apprehend & seise the bodies of the afores'd frances Hutchins & Ruth Willford , upon sight hereof, & them safely Convey to [to] Salem afores'd, to their Majests: justices of the Peace there, to be examined & proceeded with according to law: for which this shall be yo'r warrant: Given under my hand & seal this eighteenth day of August Anno Domini 1692: In the 4th year of their
Majes'ts Reigne &c.

(Reverse) according to this warrant I have seased
and brought don mrs frances huchins: but
sought with Diligenc for Ruth Wilford and
she cannot be found

Per me William Strlin of haverhill Constable.. 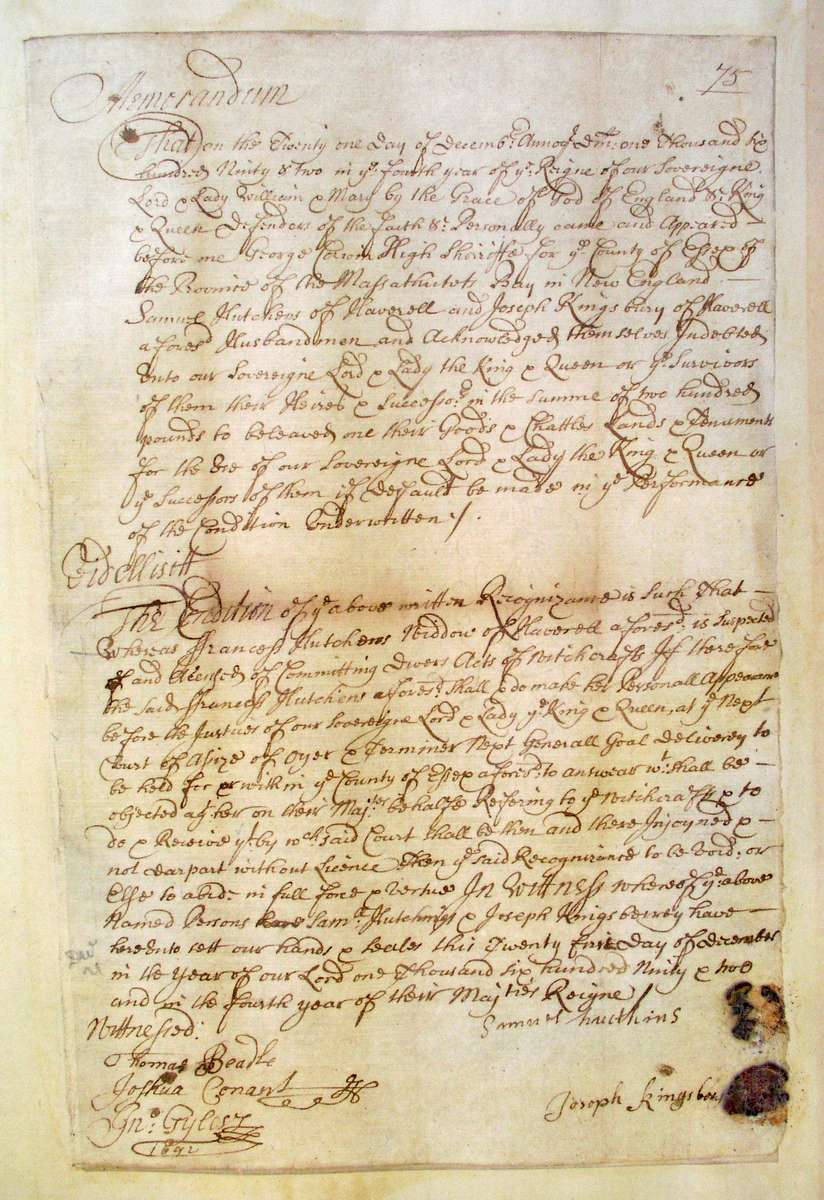 That on the Twenty one Day of Decemb'r: Anno'qe Decemb'r : one Thousand Six hundred Ninty & two in the fourth year of the Reigne of our Sovereigne Lord & Lady William & Mary by the Grace of God of England &c. King & Queen Defenders of the faith &c: Personally came and Appeared before me George Corwin High Shirriffe for the County of Essex of the Province of the Massathutets Bay in New England -- Samuel Hutchens of Haverell and Jospeh Kingsbury of Haverell afores'd Husbandman and Acknowledged themselves Indebted Unto our Sovereigne Lord & Lady the King & Queen or the Survivors of them their Heires & Successors: in the Summe of two hundred pounds to beleaved one their Goods & Chattles Lands & Tenements for the Use of our Sovereigne Lord & Lady the King & Queen or the Successors of them if Default be made in the Performance of the Condition Underwritten

The condition of the above written Recognizance is Such That Whereas francess Hutchens Widdow of Haverell afores'd is Suspected of and Accused of Committing Divers Acts of Witchcrafts If therefore the Said frances Hutchens afores'd: Shall & do make her Personall Appearance before the Justices of our Sovereigne Lord & Lady the King & Queen at the Next Court of Assize of Oyer & Terminer Next Generall Goal Delivery to be held for & within the County of Essex afores'd; to answar what shall be objected ag't: her on their Maj'tes: behalfe Refering to the Witchcrafts & to do & Receive that by w'ch said Court shall be then and there Injoyned & not Darpart without Licence Then the said Recognizance to be Void: or Else to abide in full force & Vertue In Wittness wherof the: above Named Persons #[have] Sam'll: Hutchings & Joseph Kingsberry have hereunto sett our hands & seales this Twenty first Day of December in the Year of our Lord one Thousand six hundred Ninty & two, and in the fourth year of their Maj'ties Reigne