Ephriam foster , of Andivor. & Joseph Tyler of Boxford Complaine to their Majesties Justices of the Peace in Salem against John Jackson Sen'r: & his Son John Jackson Jun'r & John Howard. all of the Towne of Rowley. Labourers for that they & Every of them have Comited Severall acts of witchcraft upon the bodys Martha Sprag of Boxford & Rose foster of Andivor Singlewomen to their Great hurt, & the Said Eph'm. foster & Joseph Tyler doe by these presents oblige themselves Joyntly & Severaly to our Sover'n Lord & Lady King William & Queen Mary in the full & whole Sume of one hundred pounds Bond Currant mony of New England The Condition is that they will prosecut the abov said Complaint to Effect as the law directs -- 25 Aug'st. 1692
This Recognizance taken before me

Essex/ To the Sheriff of the County of Essex or his Deputy/ Complaint being made this day to us by Ephraim foster of Andivor & Joseph Tyler of Boxford against John Jackson sen'r & his son John Jackson Jun'r & John Howard all of Rowley Labourers that they the Said John Jackson Sen'r John Jackson Jun'r. & John Howard have Sorely, afflicted Martha Sprage of Boxford & Rose foster of Andivor Singlewomen by witchcraft contrary to the Peace of our Soverain Lord & Lady William & Mary King & Queen of England &c & to their Majesties Laws in that case provided, & Said Ephriam Foster & Joseph Tyler haveing given Sufficient bond to procecut their Complaint to Effect These are therfore to require you in their Majesties names forthwith to aprehend & seize the Bodys of the Said John Jackson Sen'r. John Jackson Jun'r. & John Howard of Rowley & them Safely convey to Salem before us their Majesties Justices of the Peace to be examined & proceeded w'th. according to Law. for w'ch this shall be yo'r warrant dated In Salem:
25th. August 1692
*Bartho Gedney
*John Hathorne
* Jonathan. Corwin
*John Higginson Just'es Peace

(Reverse) August 26 -- 1692 I have apprehended the three within named John Jackson Sen'r John Jackson Jun'r and John Howard: and have brought them before yo're honors to Answer as wi[thin] by me *Geo. Herrick Dep'y Sheriff 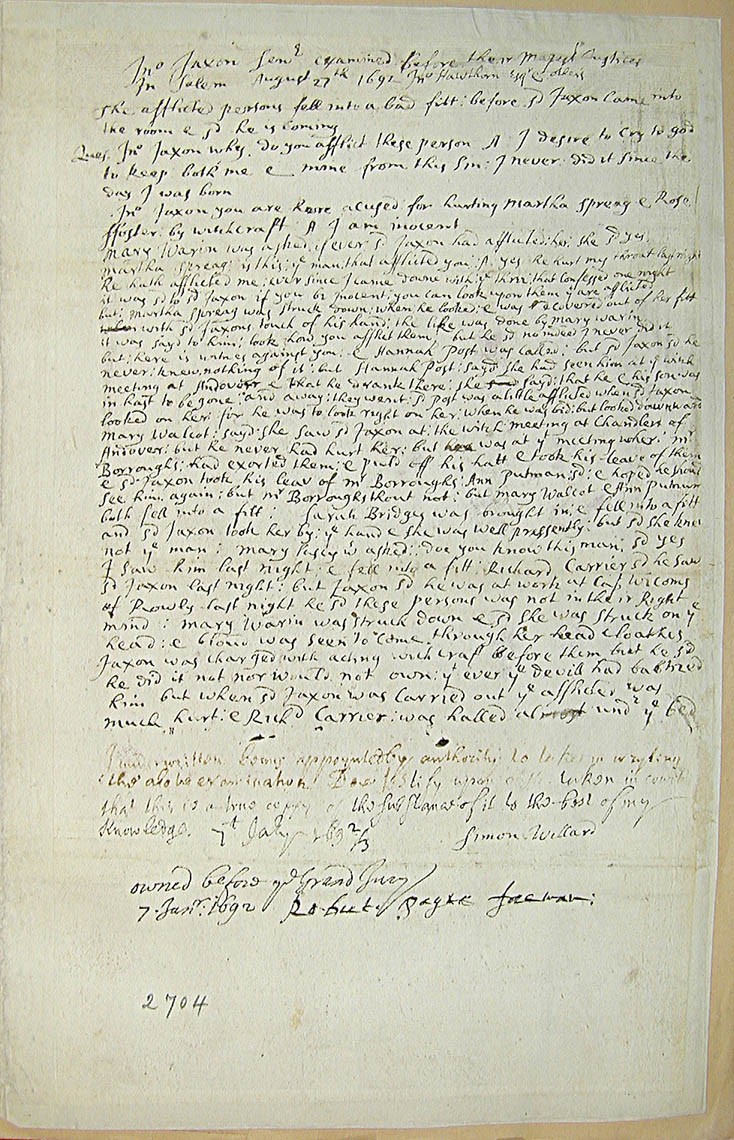 The afflicted persons fell into a bad fitt: before s'd Jaxon came into the room & s'd he is coming
Ques. Jno Jaxon why do you afflict these persons A I desire to Cry to God to keep both me & mine from this sin: I never did it since the Day I was born.
Jno Jaxon you are here accused for hurting Martha Spreag & Rose foster by witchcraft A. I am inocent.
Mary Warren was asked if ever s'd Jaxon had afflicted: her: she s'd yes.
Martha Spreag: is this: the man that afflicted you: A. Yes he hurt my throat last night He hath afflicted me: ever since I came Downe with the three: that Confessed one night it was s'd to s'd Jaxon if you be Inocent: You can look upon them that are afflicted but: Martha Spreag was struck Down: when he looked: & was Recovered out of her fitt with s'd Jaxons touch of his hand: the like was done by Mary Warin it was sayd to him: look how you afflict them: but he s'd no indeed I never Did it but: here is witnes against you: & Hannah Post was Called: but s'd Jaxon s'd he never: knew nothing of it: but Hannah Post: sayd she had seen him at the witch meeting at Andover[r] & that he Drank there: she sayd: that he & his son was in hast to be gone: and away: they went: s'd Post was a little afflicted when s'd Jaxon looked on her: for he was to look right on her: when he was bid: but looked downward: Mary Walcot: sayd. she Saw s'd Jaxon at: the witch meeting at Chandlers of Andover: but he never had hurt her: but was at that meeting where: Mr Borroughs: had exorted them: and puld off his hat & took his leave of them & s'd. Jaxon took his leav of Mr Borroughs: Ann Putnam: s'd: & hoped he should see him. again: but Mr Borroughs thout not: but Mary Walcot & Ann Putnam both fell into a fitt: sarah Bridges was brought in: & fell into a fitt and s'd Jaxon took her by: the hand & she was well presently: but s'd she knew not the man: Mary Lasey was asked: Doe you know this man: s'd Yes I saw him last night: & fell into a fitt: Richard Carrier s'd he saw s'd Jaxon last night: but Jaxon s'd he was at work at Cap. Wicoms of Rowley last night he s'd these persons was not in their Right mind: Mary Warin was struck Down [& s'd she was struck down] & s'd she was struck on the head: a Cloud was seen to Come: through her head cloathes Jaxon was charged with acting wich craf before them but he s'd he did it not nor would not own that ever the Devil had babtized him but when s'd Jaxon was Carried out the afflicted was much hurt: & Rich'd Carrier was halled almost und'r the bed.

I underwritten being appoynted by authority to testify in wryting the above examination Doe testify upon oath taken in court that this is true coppy of the substance of it to the best of my Knowledge. 7th July 1692/3 *Simon Willard 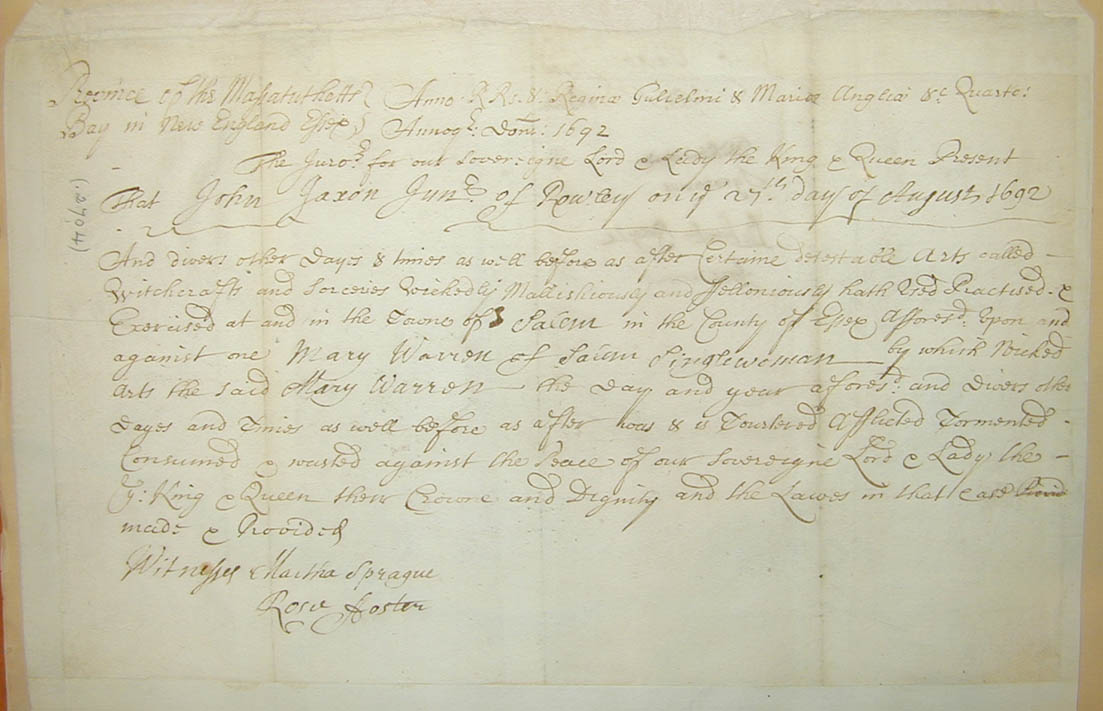 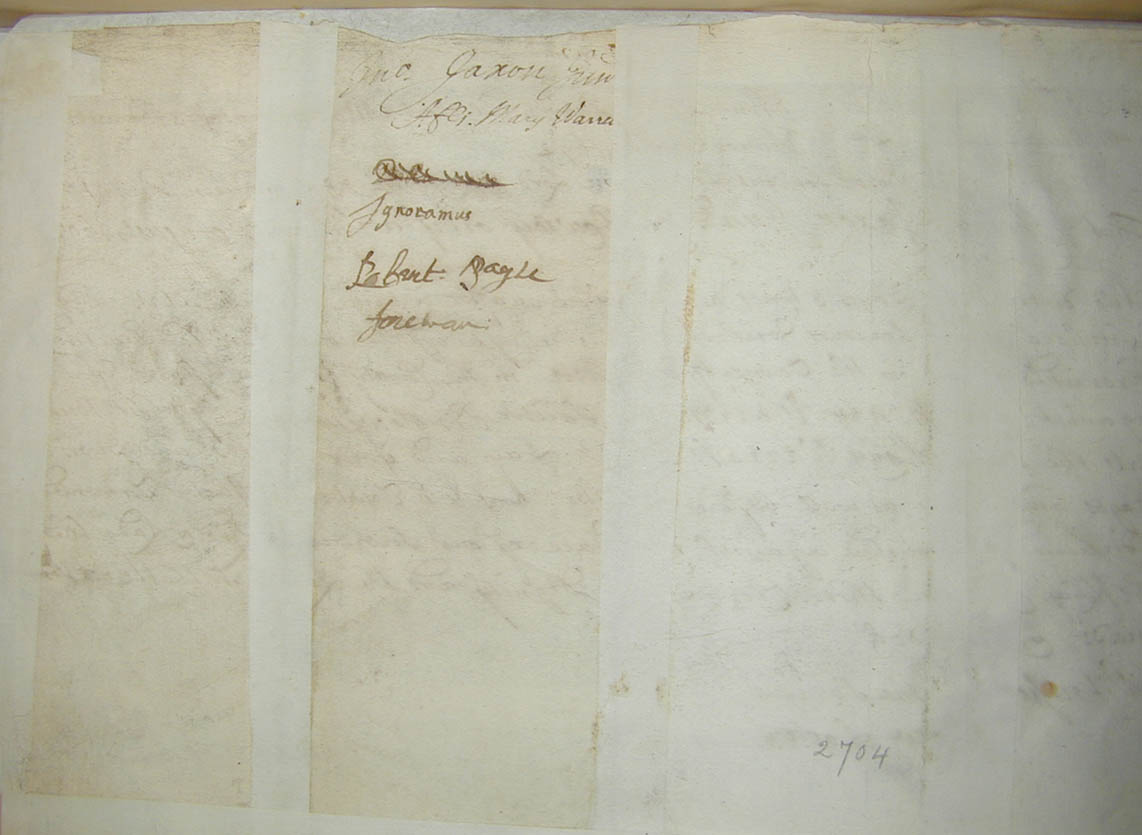 The Jurors [for] our sovereigne Lord & Lady the King & Queen Presents That John Jaxon Sen'r. of Rowley in the County of Essex on the Twenty Seventh Day of August 1692 -- And Divers other Dayes and Times as well Before as after Certaine Detestable Arts called Witchcrafts & Sorceries wickedly Mallishiously & felloniously hath used Practised & Exercised at & in the Towne of Salem in the County of Essex afores'd upon and against one Mary Warren of Salem Singlewoman By which Wicked Arts the said Mary Warren the Day & year afores'd and Divers other Days and Times as well before as after was & is Tortured Afflicted Tormented Consumed Pined & wasted against the Peace of our sovereigne Lord & Lady the King and Queen their Crowne and Dignity and the Lawes in that Case made and Provided.