(Warrant for the apprehension of Martha Emerson, and Officer's Return )

To the Sherriff of the County of Essex or his Dept or Constable of Haverhill
You are in theire Majest's names hereby required forthwith or as soon as may be to Bring before us Martha Emerson /the wife of Joseph Emerson of Haverhill, who was Daughter of Roger toothak[e]r of Belrica late Deceased; who stands accused of haveing committed sundry acts of Witchcraft Lately on the Bodys of Mary Warren Mary Lacy & others to theire graete hurtes. And that in Order to her Examination Relateing to the abovesaid Premisses and hereof faile not Dated Salem July the 22th 1692 , You are likewise required to make diligent search for any Images or Popetts &c in s'd house or aboute itt --
Salem: *Bartho. Gedney
*John Hathorne
*Jonathan. Corwin
*John Higginson } Justices Peace 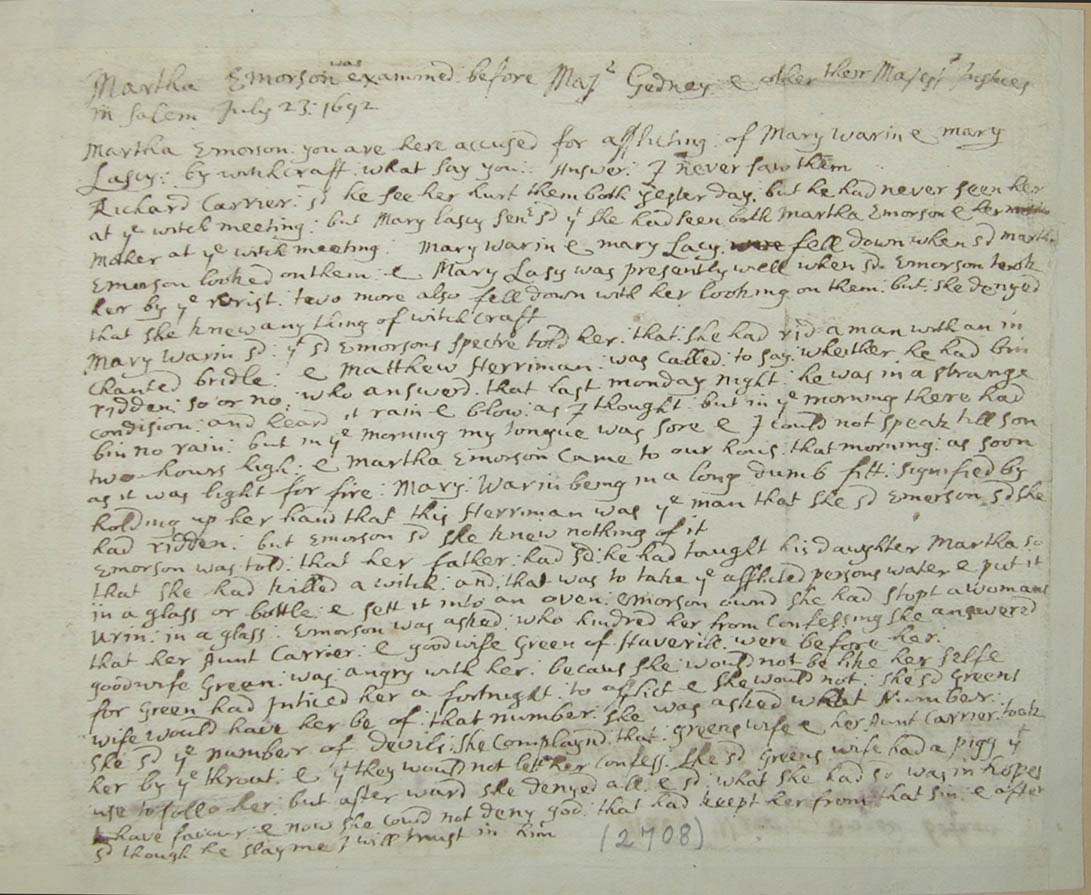 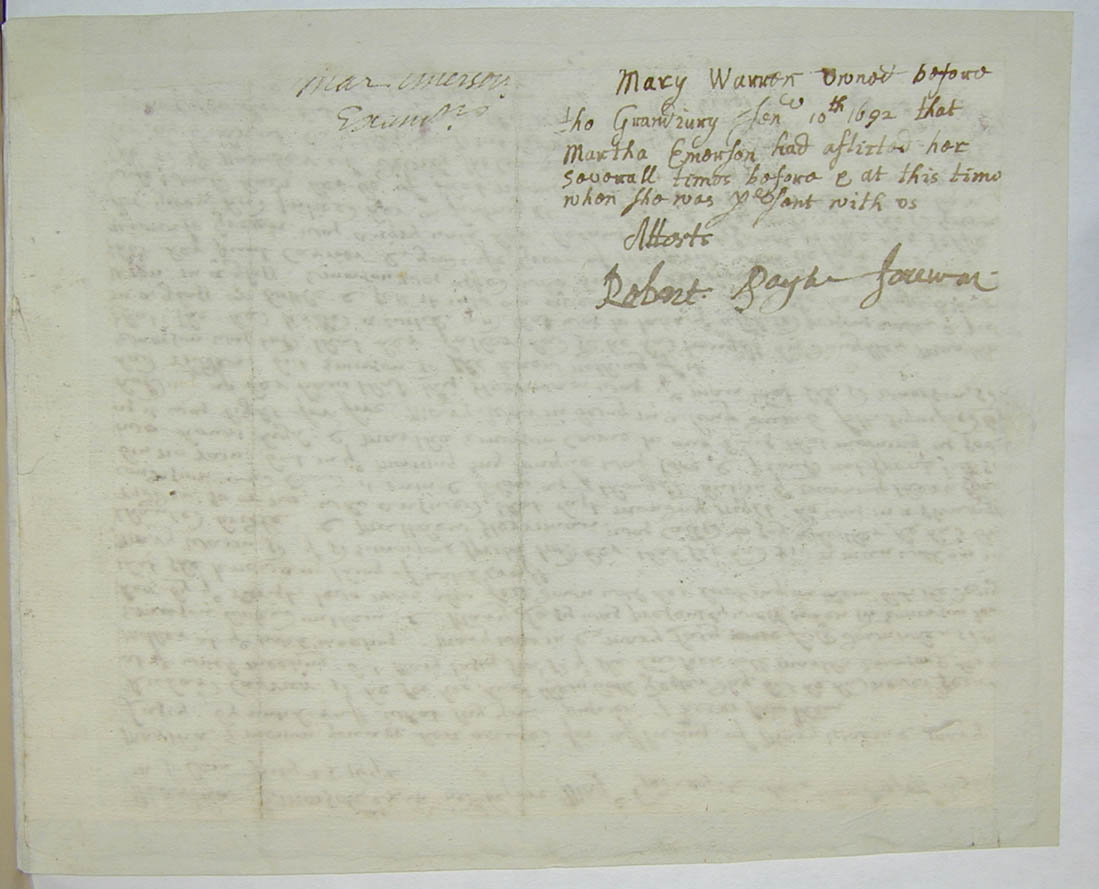 Martha Emorson you are here accused for afflicting: of Mary Warin & Mary Lasey: by witchcraft: what say you: Answer: I never saw them. Richard Carrier: s'd he see her hurt them both yester day, but he had never seen her at the witch meeting: but Mary lasey sen'r s'd that she had seen both Martha Emorson & her mother at the witch meeting. Mary Warin & Mary Lacy fell down when s'd Martha Emorson looked on them: & Mary Lasy was presently well when s'd Emorson took her by the wrist: two more also fell down with her looking on them: but: she denyed that she knew anything of witchcraft.
Mary Warin s'd: that s'd Emersons spectre told her: that: she had rid a man with an inchanted bridle: & Matthew Herriman: was called: to say whether he had bin ridden: so or no: who answered. that last Monday night: he was in a strange condision: and heard it rain & blow: as I thought: but in the morning there had bin no rain: but in the morning my tongue was sore & I could not speak till son two hours high: & Martha Emorson came to our house that morning: as soon as it was light for fire: Mary: Warin being in a long Dumb fitt; signified by holding up her hand that this Harriman was the man that she s'd Emorson s'd she had ridden: but Emorson s'd she knew nothing of it Emerson was told: that her father: had s'd: he had tought his Daughter Martha so that she had killed a witch: and: that was to take the afflicted persons water & put in in a glass or bottle: & sett it into an oven: Emorson owned she had [kept] a womans urin: in a glass. Emorson was asked: who hindred her from confessing she answered that her Aunt Carrier & good wife Green of Haverill: were before her: good wife Green: was angry with her: because she would not be like her selfe for Green had Inticed her a fortnight: to afflict & she would not: she s'd Greens wife would have her be of: that number: she was asked what Number: she s'd the number of Devils: she complaynd: that: Greens wife & her Aunt Carrier: took her by the throat: & that they would not lett her Confess. she s'd Greens wife had a pigg that use to follo her: but after ward she Denyed all. & s'd: what she had s'd was in hopes to have favour: & now she could not Deny god: that had keept her from that sin: & after s'd though he slay me I will trust in him.

(Reverse) Mar. Emerson Exam. Mary Warran Owned before
the Grand jury Jan'y 10th 1692 that
Martha Emerson had afflicted her
severall times before & at this time when she was presant with us
Attests *Robert Payne foreman: 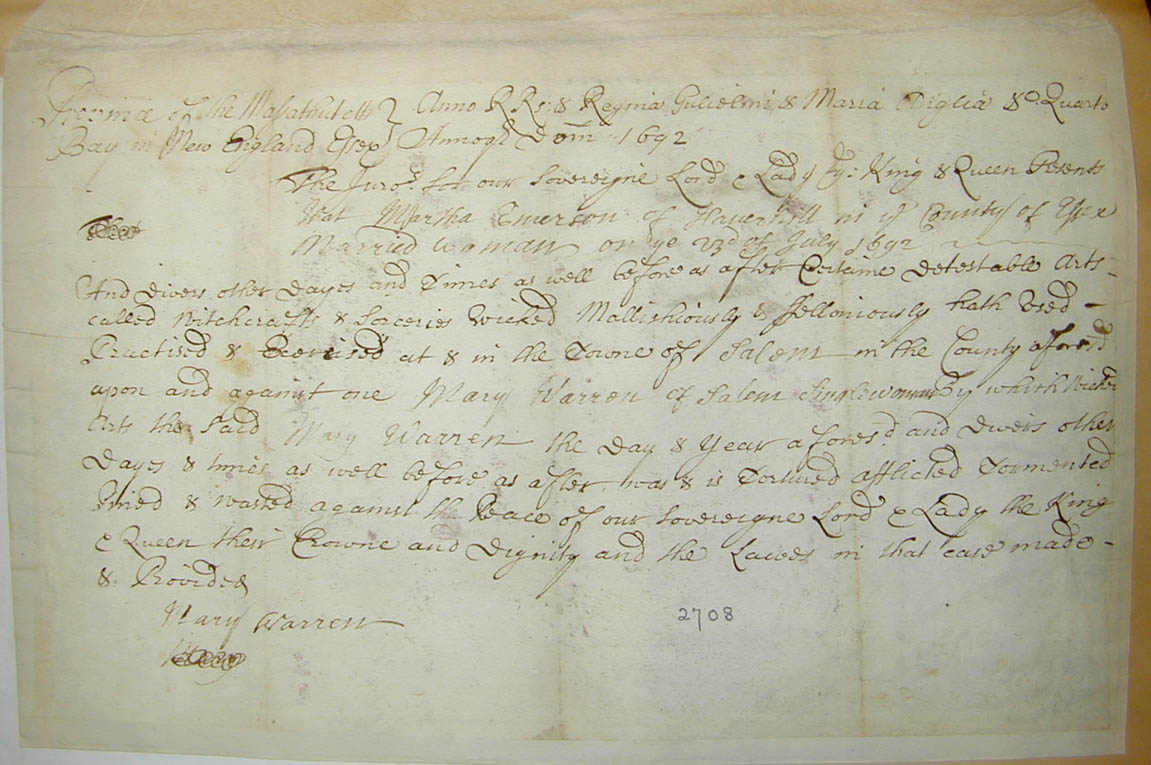 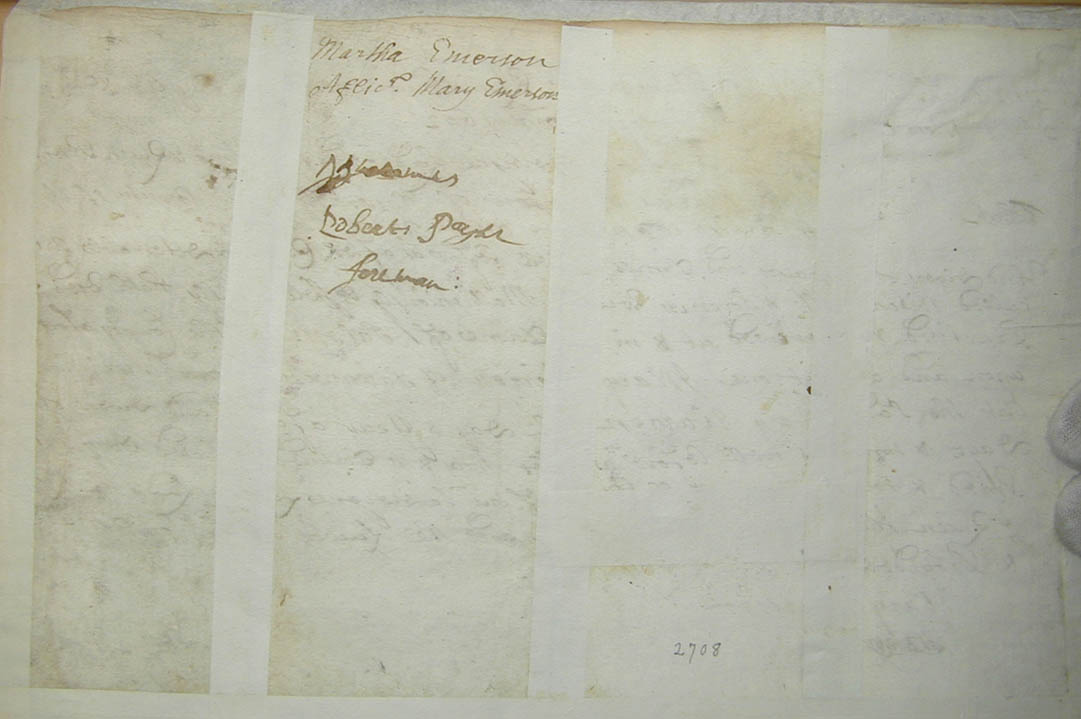 The Juro's. for our sovereigne Lord & Lady the: King & Queen Presents That Martha Emerson of Haverhill in the County of Essex Married Woman on the 23d of July 1692 -- And Diverse other Dayes and Times as well before as after Certaine Detestable Arts called Witchcraft & Sorceries Wicked[ly] Mallishiously & Felloniously hath Used -- Practised & Exercised at & in the Towne of Salem in the County afores'd upon and against one Mary Warren Single-woman By which Wicked Arts the said Mary Warren the Day & year afores'd and Divers other Dayes & times as well before as after was & is Tortured Afflicted Tormented Pined & Wasted against the Peace of our sovereigne Lord & Lady the King & Queen their Crowne and Dignity and the Lawes in that case made & Provided
Mary Warren