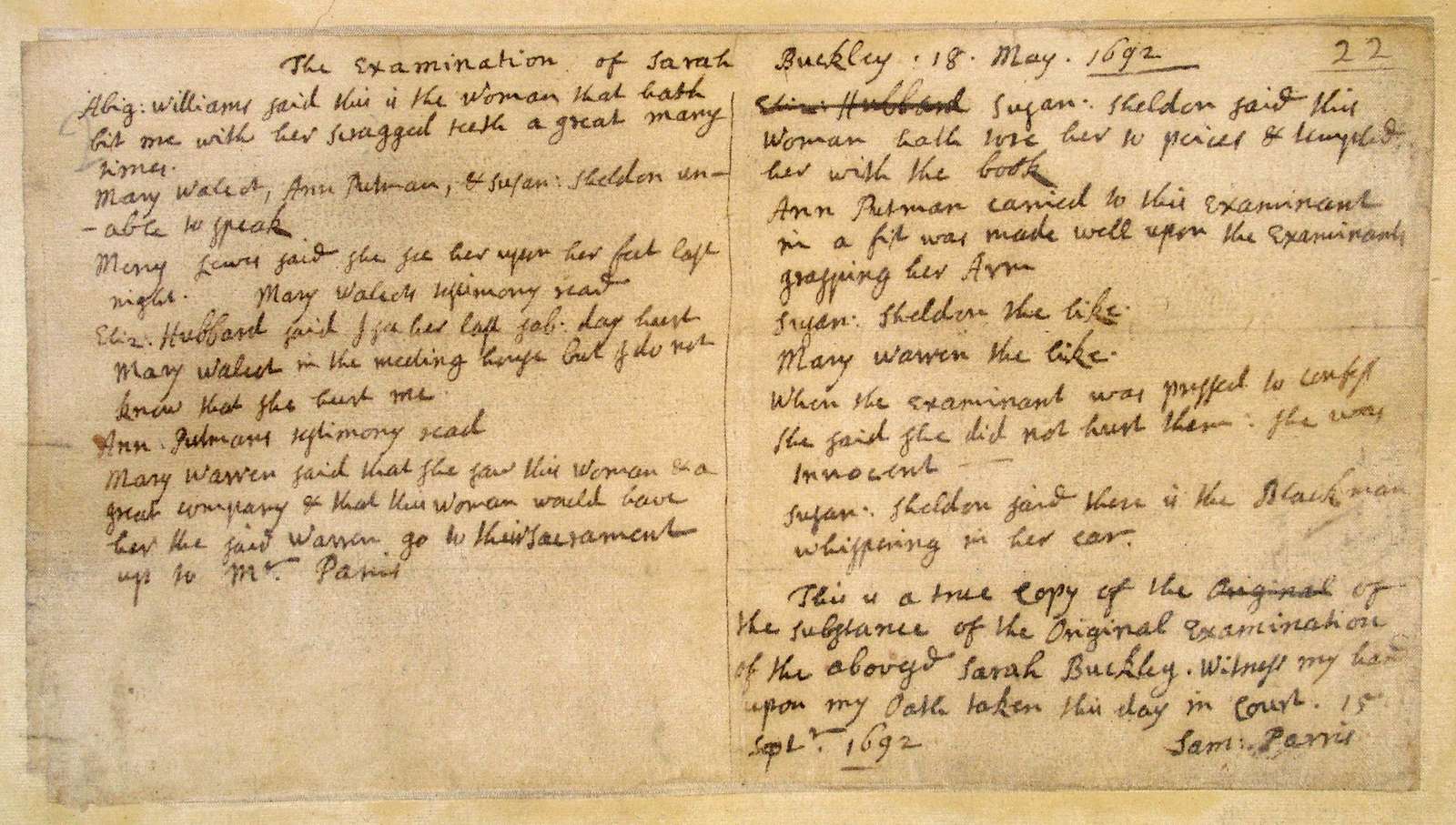 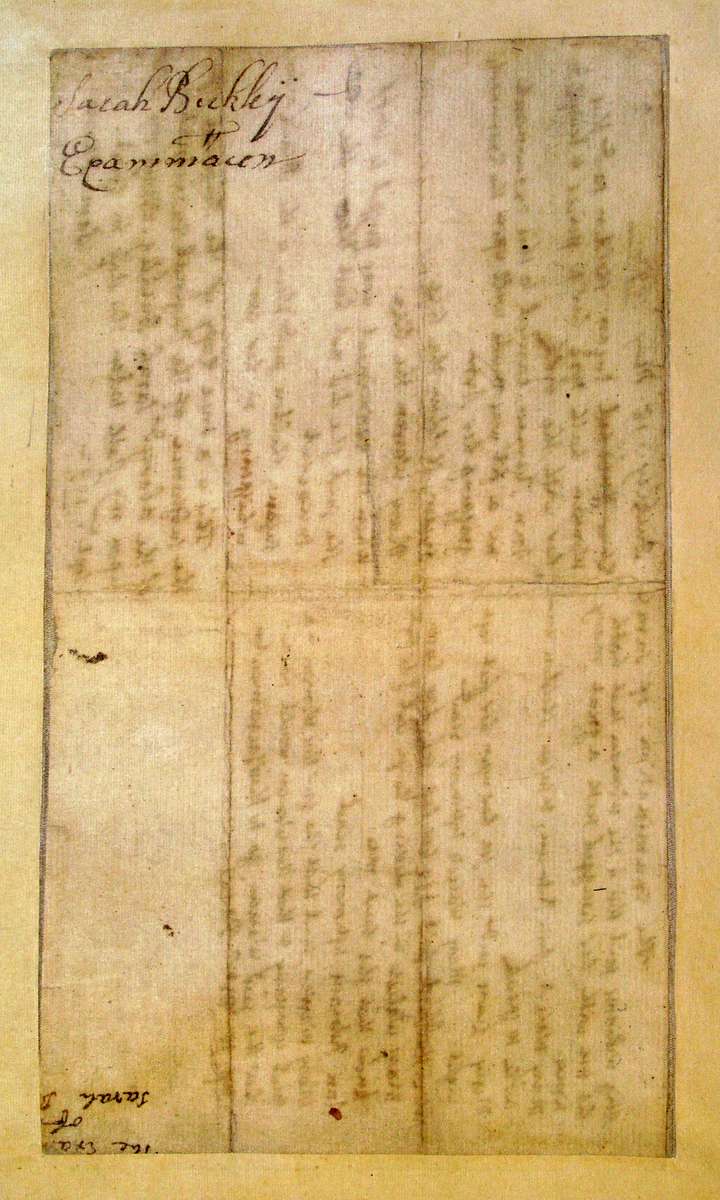 Abig: Williams said this is the Woman that hath bit me with her scragged teeth a great many times

Eliz: Hubbard said I see her last sab: day hurt Mary Walcot in the meeting house but I do not know that she hurt me

#[Eliz: Hubbard] Suzan: Sheldon said this Woman hath tore her to peices & tempted her with the book

When the examinant was pressed to confess she said she did not hurt them: she was Innocent --

Suzan: Sheldon said there is the Black man whispering in her ear

This is a true copy of the #[Original] [of the] substance of the Original Examination of the aboves'd Sarah Buckley . Witness my hand upon my Oath taken this day in Court. 15 Sept'r 1692
*Sam Parris 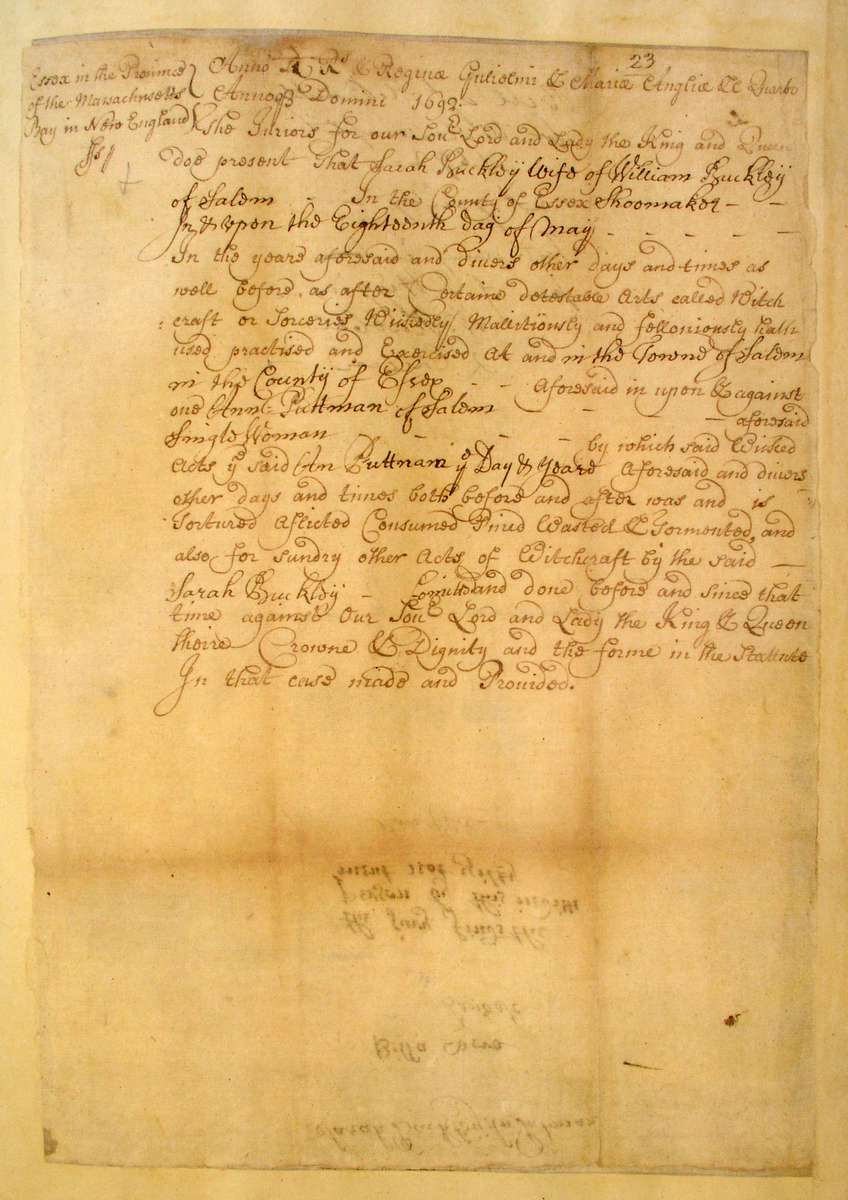 Essex in the Province of the Massachusetts Bay in New England ss//Anno RR's & Reginae Gulielmi & Mariae Angliae &c Quarto Annoq'e Domini 1692 The Juriors for our Sov'r Lord and Lady the King and Queen doe present That Sarah Buckley Wife of William Buckley of Salem\s-\In theCounty of Essex Shoomaker -- In & upon the Eighteenth day of May -- In the yeare aforesaid and divers other days and times as well before as after Certaine detestable Arts called Witchcraft or Sorceries Wickedly Mallitiously and felloniously hath used practised and Exercised At and in the Towne of Salem in the County of Essex -- Aforesaid in upon & against one Ann: Puttman of Salem Aforesaid Single Woman -- by which said Wicked Acts the said An Puttnam the Day & yeare Aforesaid and divers other days and times both before and after was and is Tortured Aflicted Consumed Pined Wasted & Tormented, and also for sundry other Acts of Witchcraft by the said -- Sarah Buckley -- Comitted and done before and since that time against Our Sov'r Lord and Lady the King & Queen theire Crowne & Dignity and the forme in the Stattute In that case made and Provided. 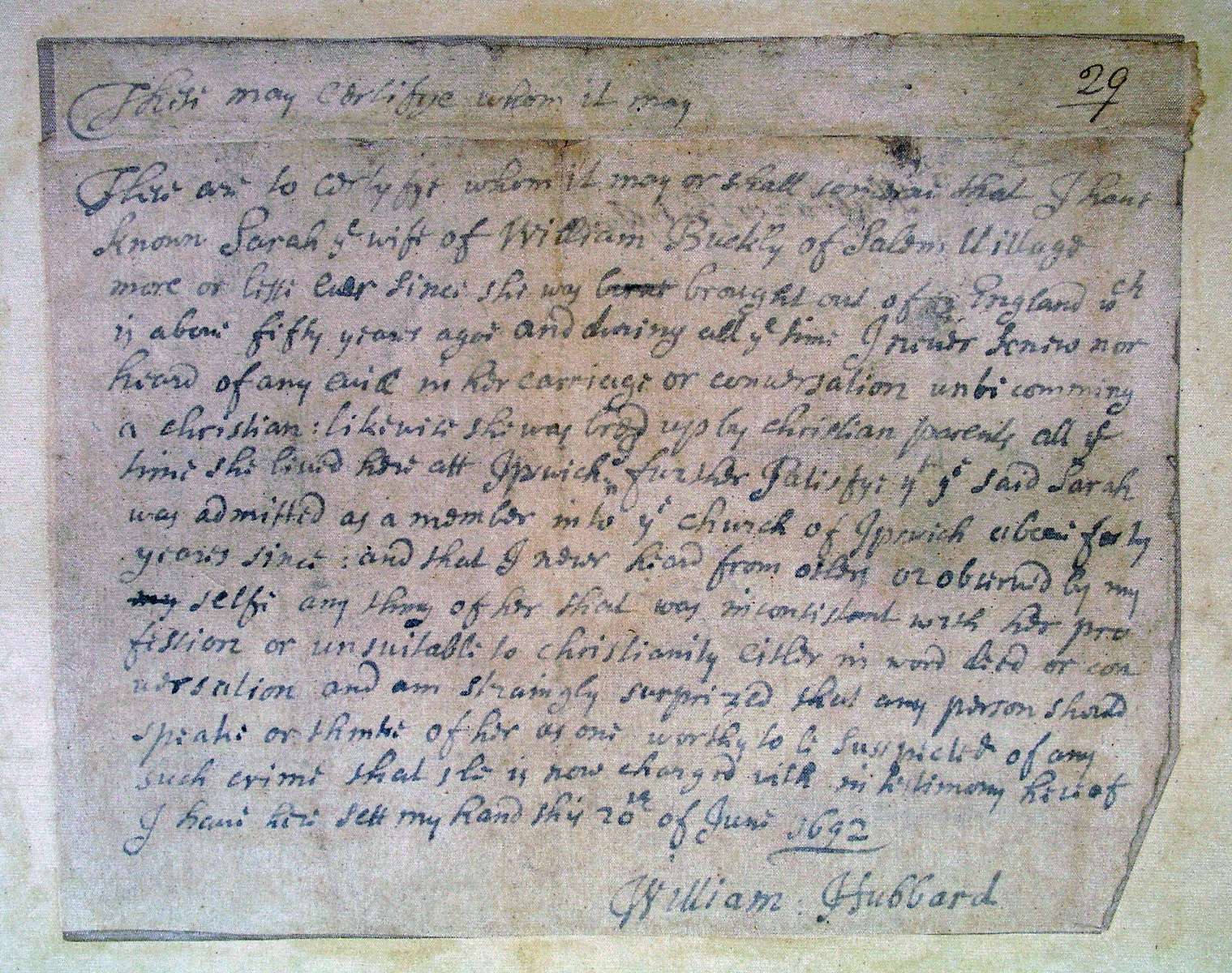 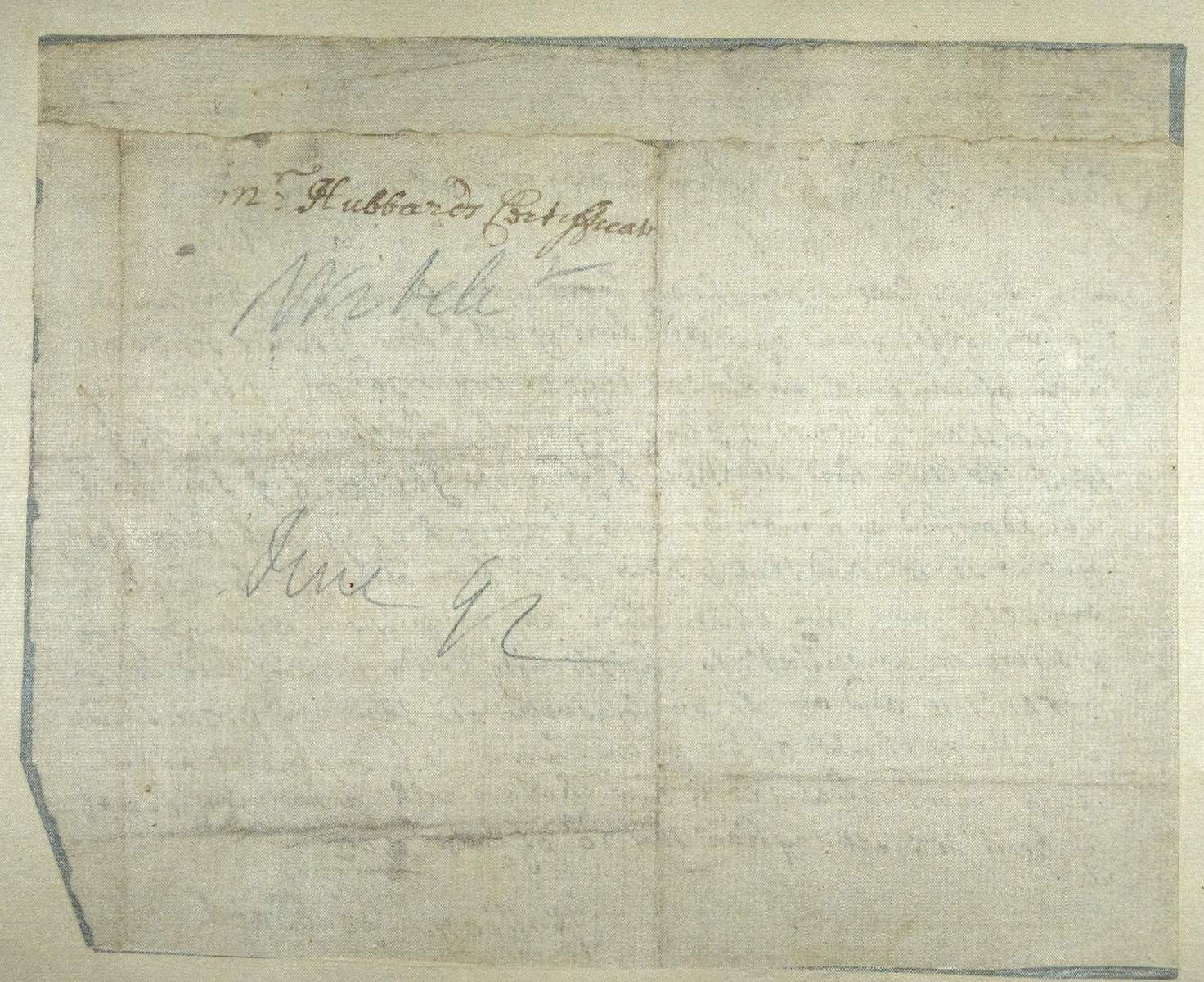 These may Certifye whom it may

These are to Certyfye whom it may or shall concerne that I have known Sarah the wife of William Buckly of Salem village more or less: ever since she was #[borut] brought out of England w'ch is above fifty years agoe and during all the time I never knew nor heard of any evill in her carriage or conversation unbecomming a christian: likewise she was bred up by christian parents all the time she lived here att Ipswich I further Tasiffye that the said Sarah was admitted as a member into the church of Ipswich above forty years since: and that I never heard from others or observed by my selfe any thing of her that was inconsistent with her profession or unsuitable to christianity either in word deed or conversation and am straingly surprized that any person should speake or thinke of her as one worthy to be susspicted of any such crime that she is now charged with in testimony hereof I have here sett my hand this 20'th of June 1692 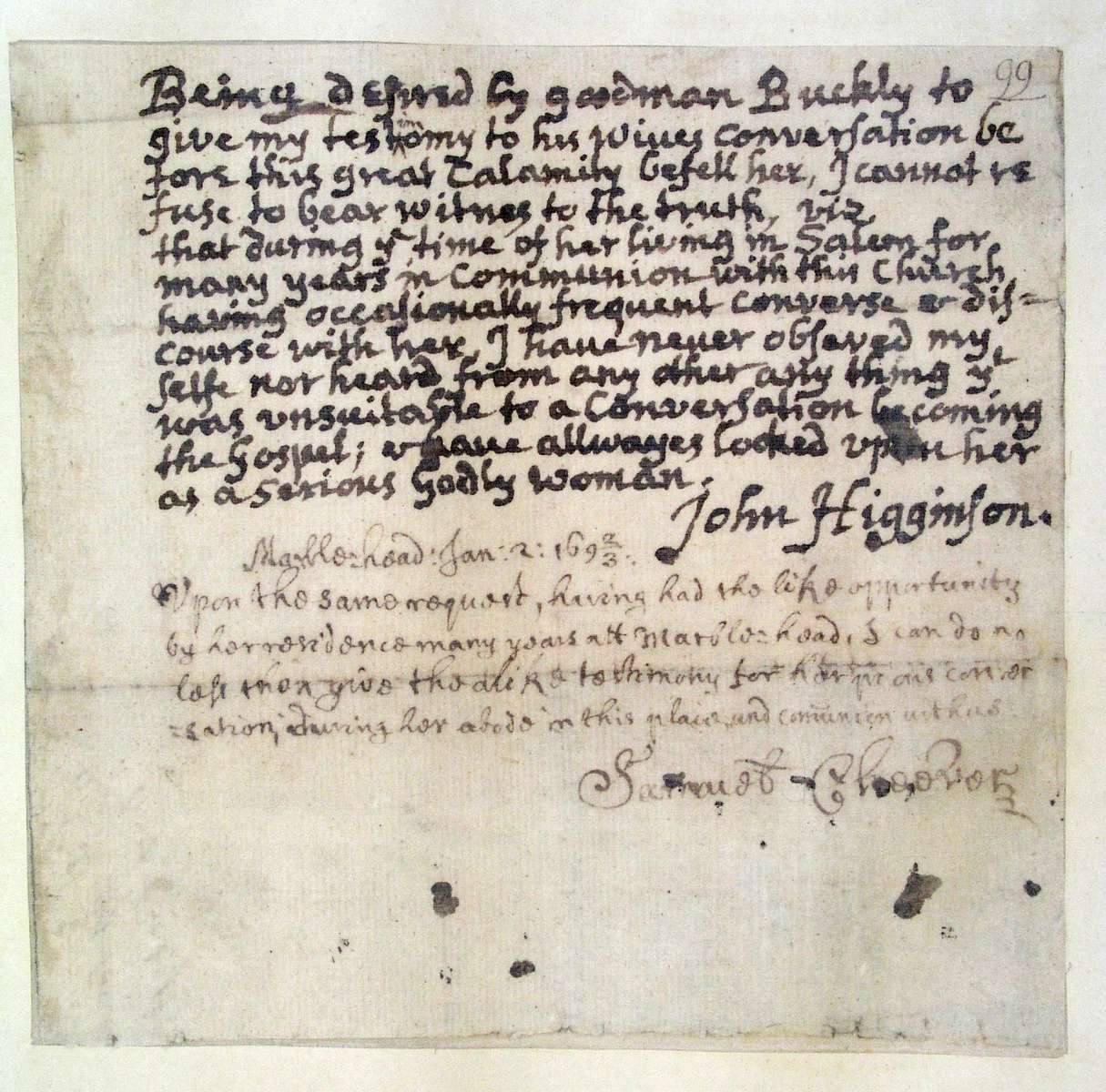 (Testimony of the Revs. John Higginson and Samuel Cheever for Sarah Buckley )

Being desired by goodman Buckly to give my testimony to his wives conversation before this great Calamity befell her, I cannot refuse to bear witnes to the truth, viz that during the time of her living in Salem for many years in Communion with this Church having occasionally frequent converse & discourse with her, I have never observed my selfe nor heard from any other any thing that was unsuitable to a Conversation becoming the Gospel; & have allwayes looked upon her as a serious Godly woman
*John Higginson

Marblehead: Jan: 2: 1692/3:
Upon the same request, having had the like opportunity by her residence many years att Marblehead, I can do no less then give the alike testimony for her pious conversation, during her abode in this place and communion with us
*Samuel Cheever 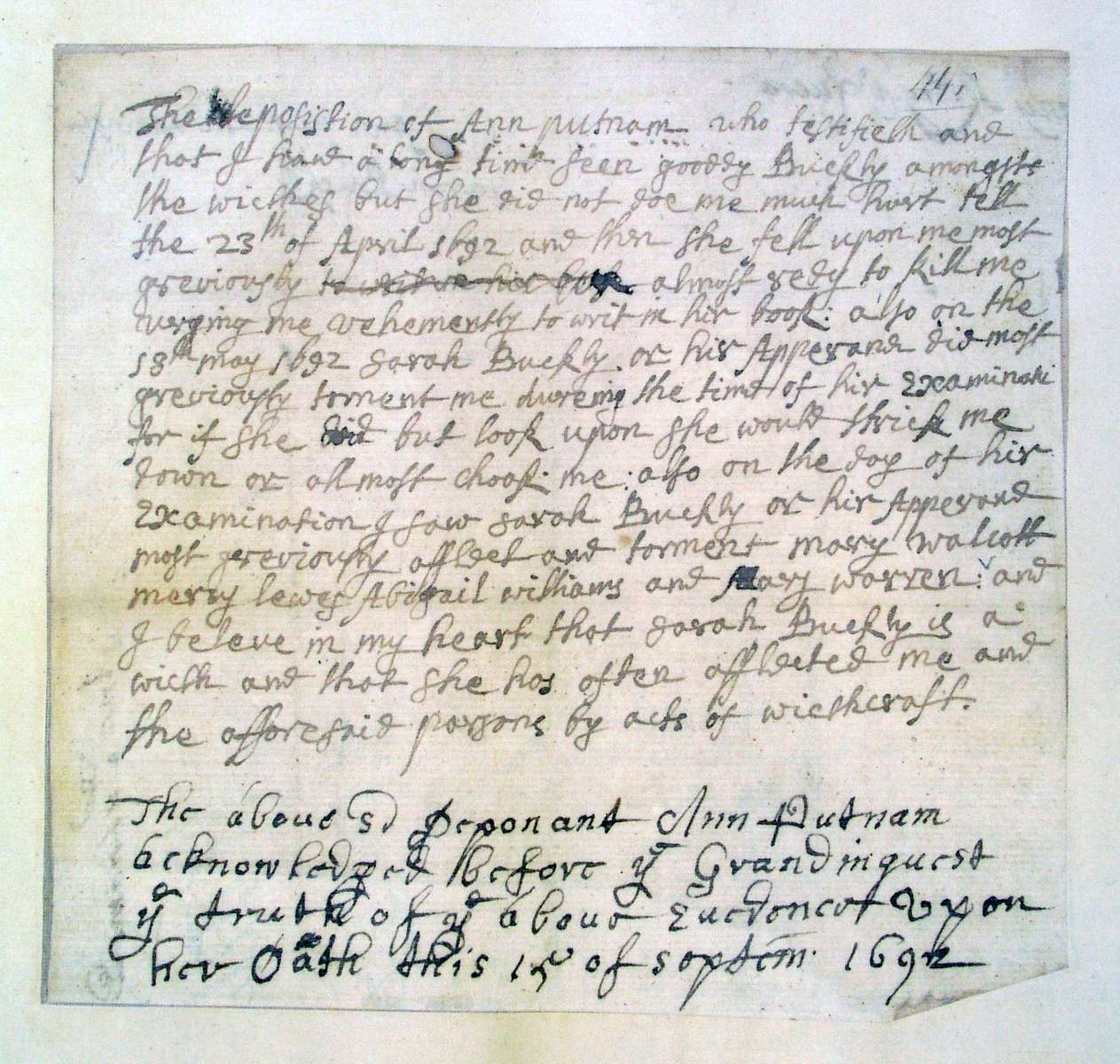 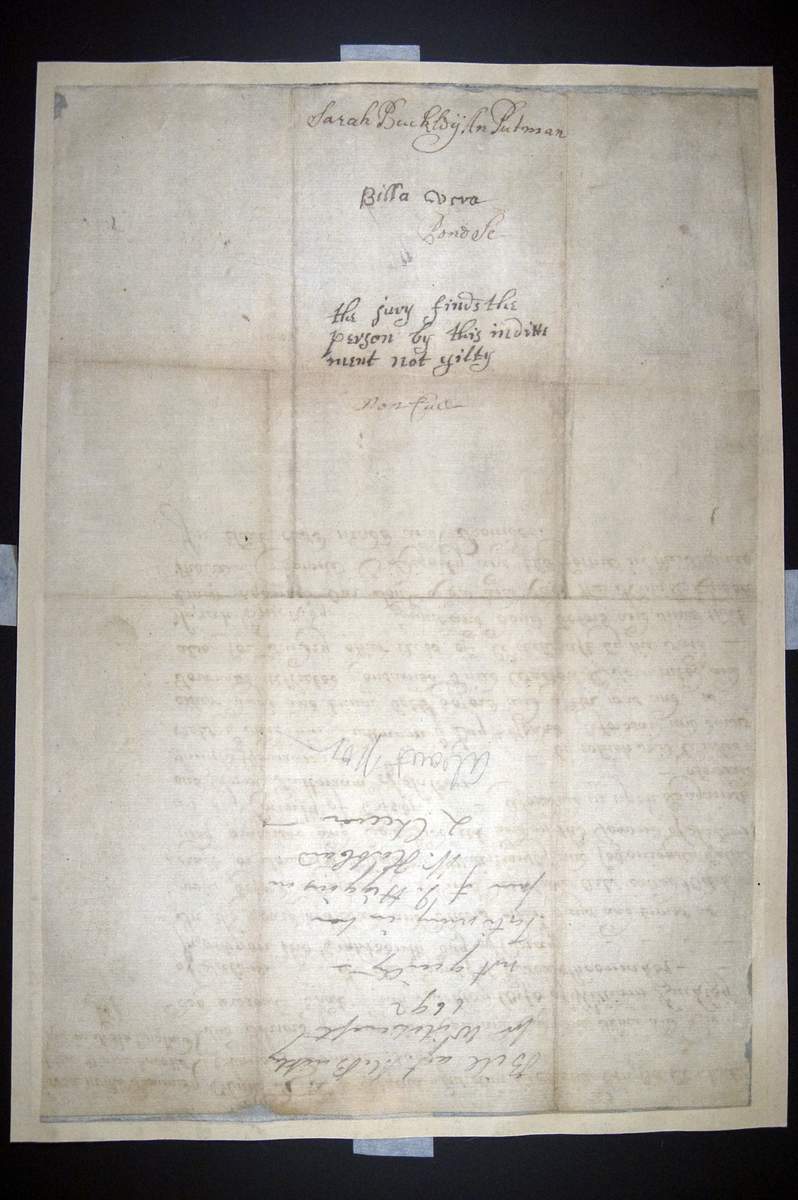 The deposistion of Ann putnam who testifieth and [saith] that I have a long time seen gooddy Buckly amongsts the wicthes but she did not doe me much hurt tell the 23'th of Aprill 1692 and then she fell upon me most greviously #[to writ in hir book] almost redy to kill me urging me vehemently to writ in hir book: also on the 18'th may 1692 Sarah Buckly or hir Apperan[c]e did most greviously to[r]ment me dureing the time of her Examina'n for if she did but look upon she would strick me down or allmost choak me: also on the day of hir Examination I saw Sarah Buckly or her Apperan[c]e most greviously afflect and torment Mary Walcott mercy lewes Abigail williams and Mary warren: and I beleve in my heart that Sarah Buckly is a wicth and that she has often afflected me and the afforesaid parsons by acts of wicthcraft.

The above s'd Deponant Ann Putnam acknowledged before the Grand inquest the truth of the above Evedence Upon her Oath this 15 of septem'. 1692 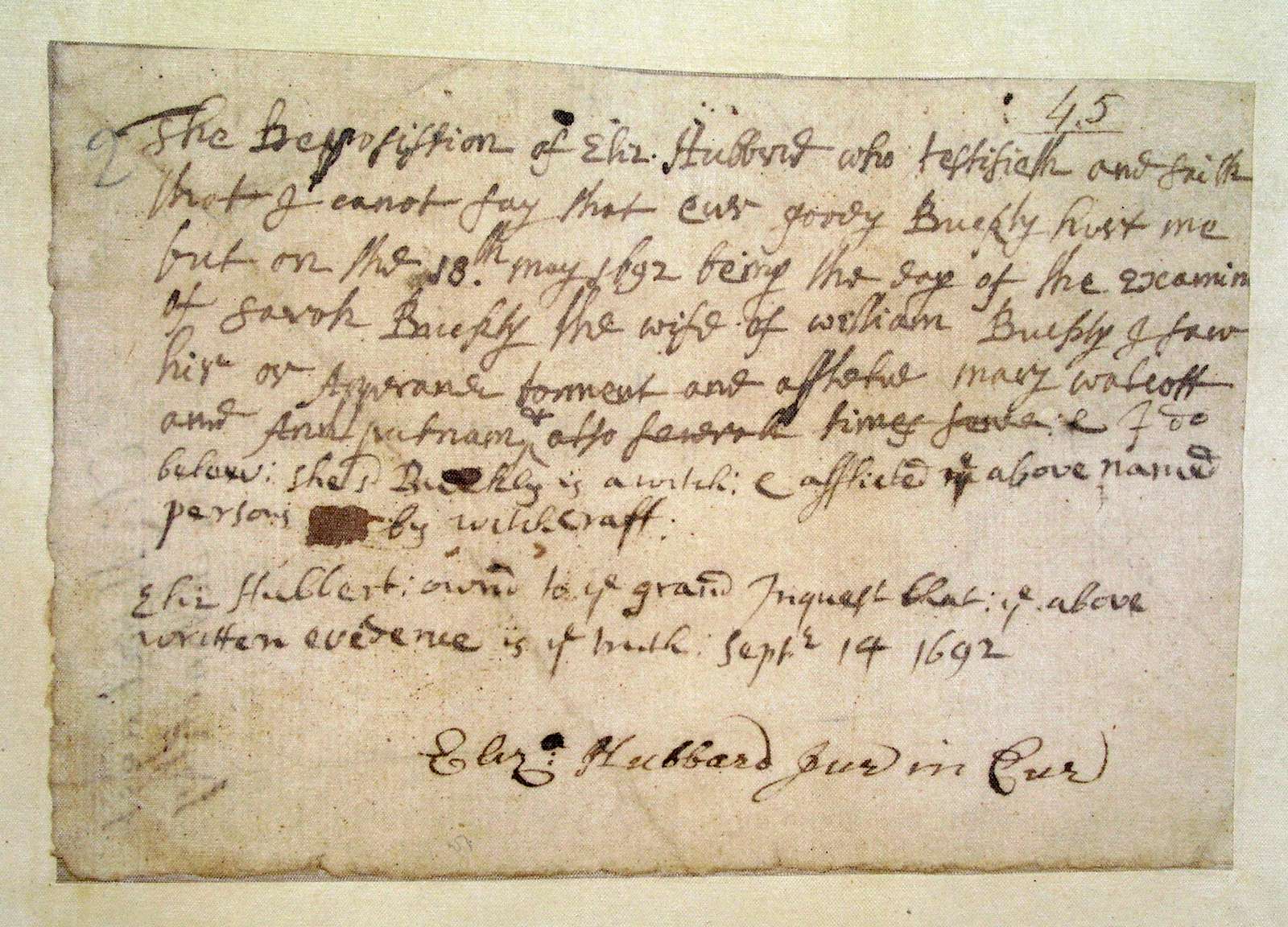 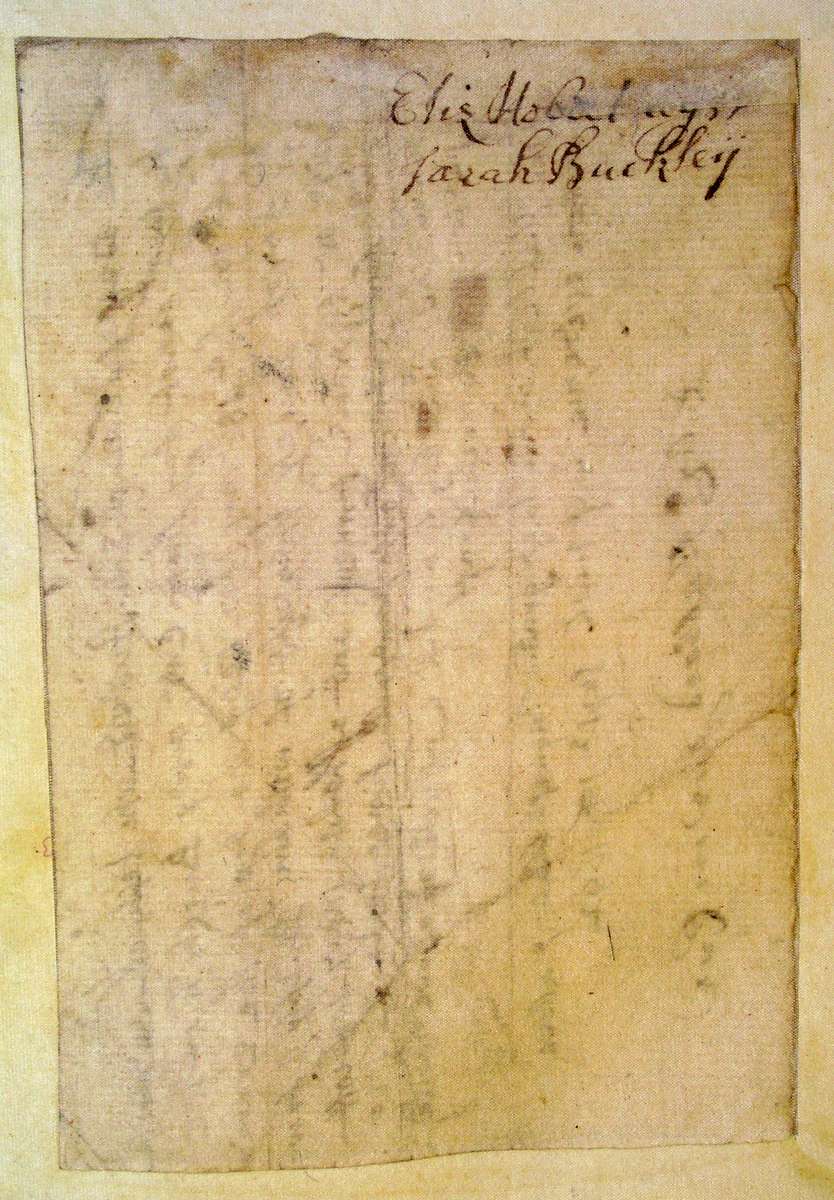 The Deposistion of Eliz. Hubberd who testifieth and saith that I cannot say that ever goody Buckly hurt me but on the 18'th may 1692 being the day of the Exami'n of Sarah Buckly the wife of william Buckly I saw hir or Apperan[c]e torment and afflete mary walcott and Ann putnam #[& also severall times sence] & I do beleve: that the s'd Buckly is a witch: & afflicted the above named persons by witchcraft:

Eliz Hubbert: owned to the grand Inquest that: the above written evidence is the truth: Sept'r 14 1692
Eliz: Hubbard Jur in Cur[ia] 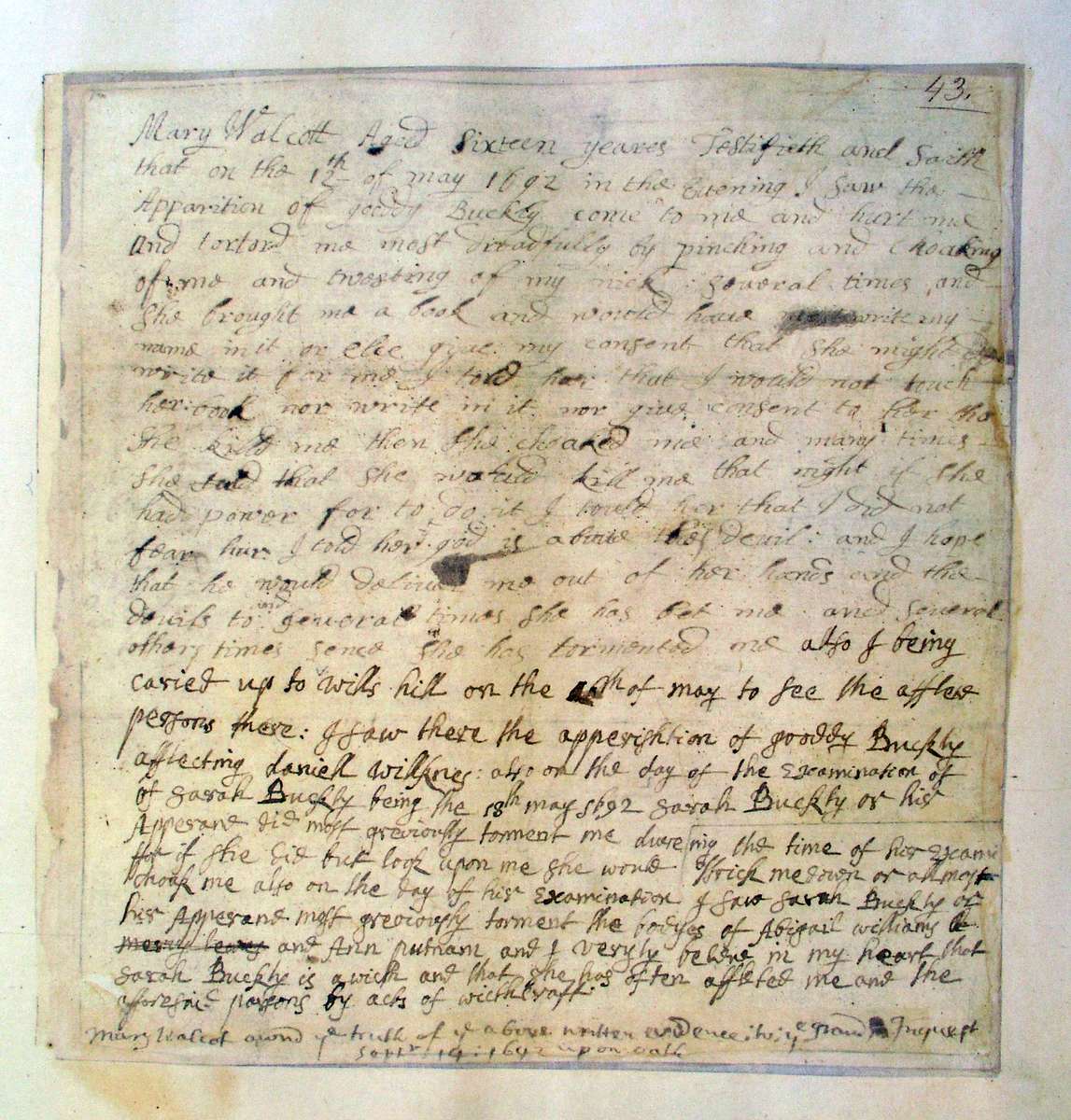 Mary Walcott Ageed sixteen yeares Testifieth and Saith that on the 12'th of may 1692 in the Evening I saw the Apparition of goody Buckly come to me and hurt me and tortord me most dreadfully by pinching and choaking of me and twesting of my nick several times and she brought me a book and would have me write my name in it or elce give my consent that she might write it for me. I told her that I would not touch her book nor write in it, nor give consent to her tho she killd me then she choaked me and many times she said that she would kill me that night if she had power for to do it I tould her that I did not fear hur I told her that god is above the devil: and I hope that he would deliver me out of her hands and the devils to and several times she has bet me and several other times sence she has tormented me also I being caried up to wills hill on the [16]'th of may to see the afflet'd persons there: I saw there the apperishtion of gooddy Buckly afflecting daniell willknes: also on the day of the Examination of [of] Sarah Buckly being the 18'th may 1692 sarah Buckly or hir Apperanc did most greviously torment me dureing the time of hir Exam : for if she did but look upon me she would strick me down or allmost choak me also on the day of hir Examination I saw Sarah Buckly or hir Apperanc most greviously torment the bodyes of Abigail williams #[mercy lewes] and Ann putnam and I veryly beleve in my heart that Sarah Buckly is a wicth and that she has often affleted me and the aforesaid persons by acts of wicthcraft.

Mary Wolcot owned the truth of the above written evidence: to: the grand Inquest
Sept'r 14. 1692 upon oath 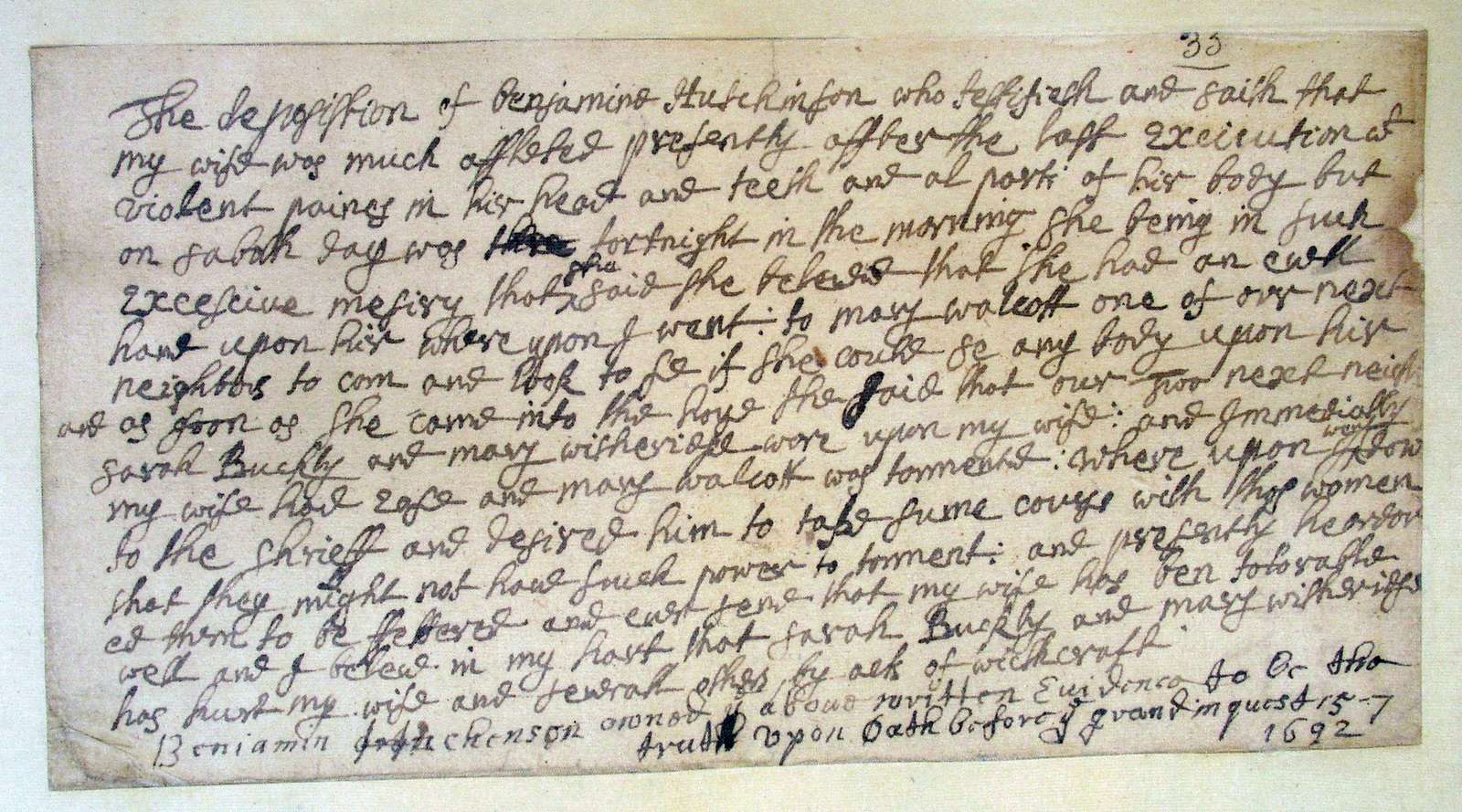 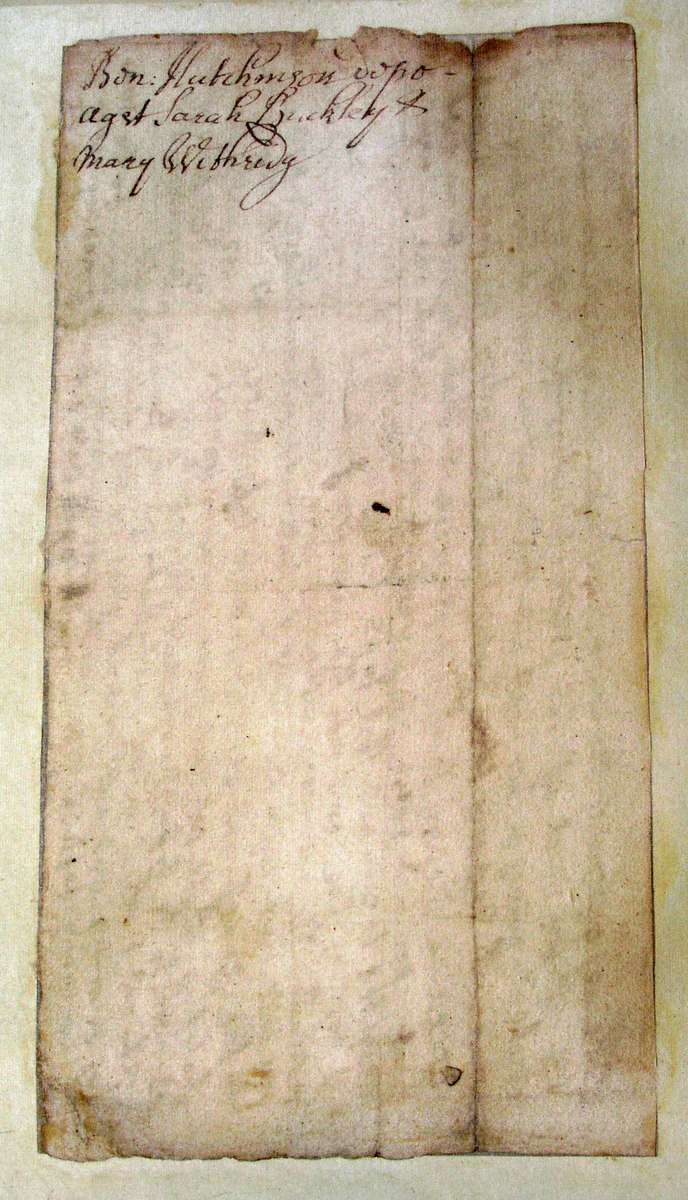 The deposistion of benjamine Hutchinson who testifieth and saith that my wife was much affleted presently affter the last exeicution w'h violent paines in hir head and teeth and al parts of hir body but on sabath day was #[three] fortnight in the morning she being in such excescive mesiry that she said she beleved that that she had an evell hand upon hir whereupon I went: to Mary Walcott one of our next neighbors to come and look to se if she could se any body upon hir and as soon as she came into the house she said that our Two neighbors sarah Buckly and mary witheridge were upon my wife: and Immediatly my wife had ease and Mary Walcott was tomented: where upon I went down to the shrieff and desired him to take sume course with thos women that they might not have souch power to torment: and presently he ordored them to be fettered and ever sence that my wife has ben tolorable well and I beleve in my hart that sarah Buckly and mary witheridge has hurt my wife and severall others by acts of wicthcraft