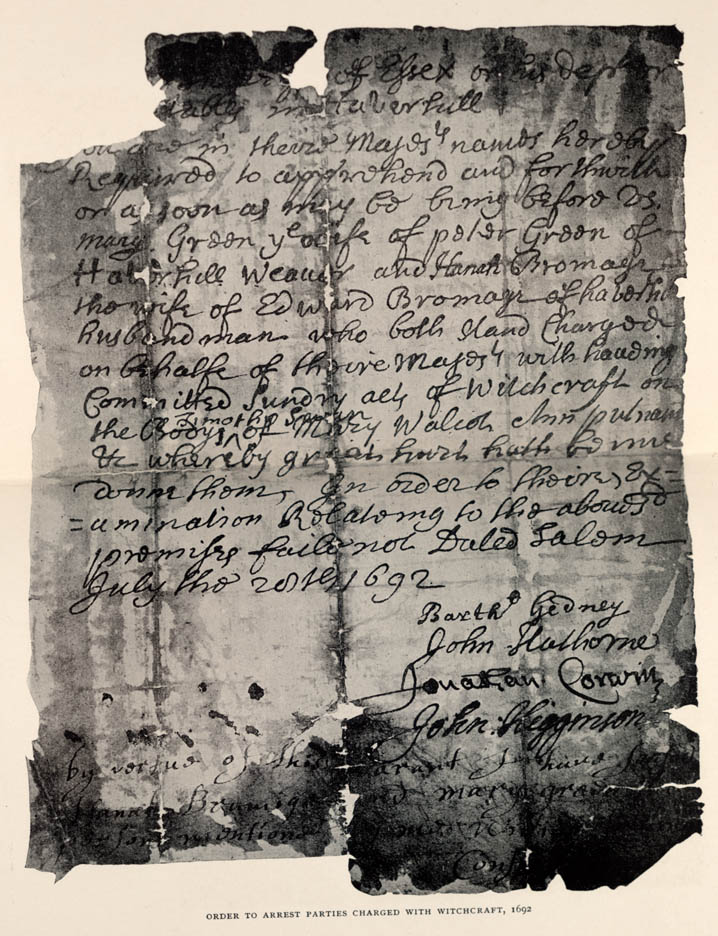 Warrant for the Apprehension of Mary Green and Hannah Bromage

[Sheriff?] of Essex or his dept or [cons]tables in Haverhill

[Y]ou are in theire Majests names hereby Required to apprehend and forthwith or as soon as may be bring before us. Mary. Green ye wife of peter Green of Haverhill Weaver and Hanah Bromage the wife of Edward Bromage of haverhil husbandman who both stand Charged on behalfe of theire Majests with haveing Committed Sundry acts of Witchcraft on the Bodys Timothy Swan of Mary Walcot Ann Putnam & whereby great hurt hath benne donne them, In order to theire, Examination Relateing to the abovesd premises faile not
Dated Salem July the 28th 1692

John Shepard of Rowley bound over by Thomas Wade Esq for Assisting and helping to Convey Mary Green a Prisoner for the Crime of Witchcraft out of their Majtes Goal in Ipswitch: Confest the fact.

The Courts Judgemt is That he pay a fine of 30li money and Costs of Court. Vpon his Confession and Petition the Court Respits 25li Till further Orders, that he stand Committed till the five pounds and Costs be paid/ 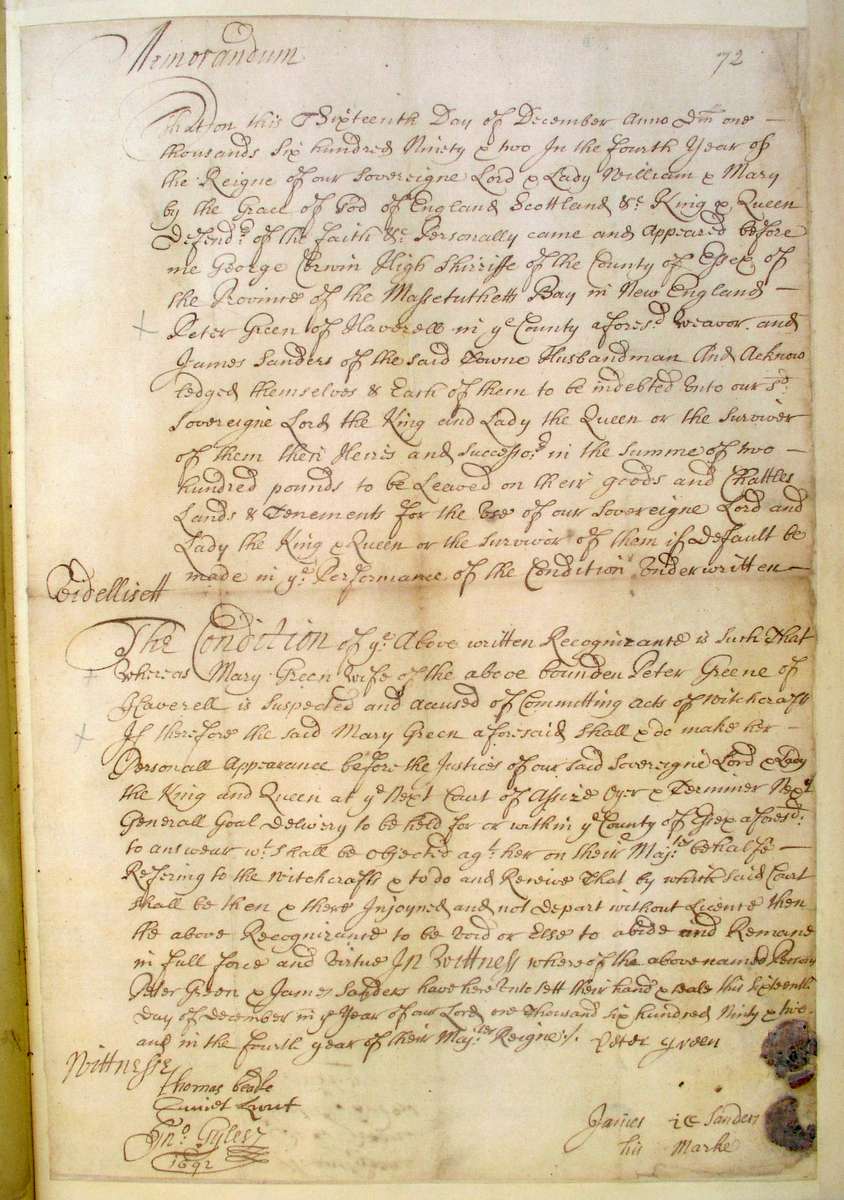 That on this Sixteenth Day of December Anno December one thousands Six hundred Ninety & two In the fourth Year of the Reigne of our Sovereigne Lord & Lady William & Mary by the Grace of God of England Scottland &c: King & Queen Defend'rs of the faith &c: Personally came and Appeared before me George Corwin High Sherriffe of the County of Essex of the Province of Massetuthetts Bay in New England Peter Green of Haverell in the County afores'd. Weavor and James Sanders of the said Towne Husbandman And Acknowledged themselves & Each of them to be indebted unto our s'd. Sovereigne Lord the King and Lady the Queen or the Surviver of them their Heires and Successo'rs: in the Summe of two hundred pounds to be Leaved on their goods and Chattles Lands & Tenements for the Use of our Sovereigne Lord and Lady the King & Queen or the Survivor of them if Default be made in the Performance of the Condition Underwritten

The Condition of the Above written Recognizance is Such That whereas Mary Green Wife of the above bounden Peter Greene of Haverell is Suspected and accused of Committing acts of Witchcrafts If therefore the said Mary Green aforesaid Shall & do make her Personall Appearance before the Justices of our Said Sovereigne Lord & Lady the King & Queen at the Next Court of Assize Oyer & Terminer Next Generall Goal Delivery to be held for or within the County of Essex afores'd: to answer w't: shall be objected ag't: her on their Maj'tes: behalfe Refering to the Witchcrafts & to do and Receive That by which said Court Shall be then & there Injoyned and not Depart without Licence then the above Recognizance to be void or Else to abide and Remane in full force and Virtue In Wittness whereof the abovenamed Persons Peter Green & James Sanders have hereunto sett their hand & seales this sixteenth Day of December in the Year of our Lord one Thousand six hundred Ninty & two and in the fourth year of their Maj'tes: Reigne:/