(Warrant for the Apprehension of Tituba and Sarah Osborne, and Officer's Return)

Whereas m'rs [masters] Joseph Hutcheson Thomas Putnam Edward Putnam and Thomas Preston Yeomen of Salem Village, in the County of Essex. personally appeared before Us, And made Complaint on behalfe of Theire Majesties against. Sarah Osburne the wife of Alexa' Osburne of Salem Village afores'd, and titibe an Indian Woman servant, of mr Sam'l parris of s'd place also; for suspition of witchcraft, by them Committe'd and thereby much injury don to Elizabeth Parris Abigail Williams Anna Putnam and Elizabeth Hubert all of Salem Village afores'd sundry times with in this two moneths and Lately also done, at s'd Salem Village. Contrary to the peace and Laws of our Sov'r Lord & Lady W'm & Mary of England &c King & Queene

You are there fore in theire Maj'ts names hereby required to apprehend and forthwith or as soon as may be bring before Us the aboves'd Sarah Osburne , and titibe Indian, at the house of L't Nath'l Ingersalls in s'd place. and if it may be by to Morrow aboute ten of the Clock in the morning then and there to be Examined Relateing to the aboves'd premises. You are likewise required to bring at the same tyme Eliz. parris Abig'l Williams Anna putnam and Eliz Hubert. or any other person or persons that can give Evedence in the aboves'd Case. and here of you are not to faile

per me *Joseph Herrick Constable

(Summary of Examinations of Sarah Good , Sarah Osborne, and Tituba, as Recorded by John Hathorne )

Titiba an Indian Woman brought before us by Const' Jos Herrick of Salem upon Suspition of Witchcraft by her Commited according to the Compl't of Jos. Hutcheson & Thomas Putnam &c of Salem Village as appeares p Warrant granted Salem 29 febr'y 1691/2 Titiba upon Examination and after some denyall acknowledged the matter of fact. according to her Examination given in more fully will appeare. and who also charged Sarah Good and Sarah Osburne with the same,

(Reverse) Salem Village
March the 1'th 1691/2
Sarah Good Sarah Osborne and Titiba an Indian Woman all of Salem Village Being this day brought before us upon Suspition of Witchcraft &c by them and Every one of them Committed. titiba an Indian Woman acknowledging the matter of fact. and Sarah Osburne and Sarah Good denying the same before us: but there appeareing. in all theire Examinations sufficient Ground to secure them all. And in order to further Examination thay Ware all p mittimus sent to the Goales in the County of Essex.

Salem March 5'th Sarah Good and titiba againe Examined. & in theire Examination titiba acknowledg the same she did formerly and accused the other two-aboves'd titiba againe s'd the same

Salem March the 7'th 1691/2
Sarah Good Osbrune and Titiba an Indian Woman all sent to the Goale in Boston according to. theire Mittimuses then sent; to Theire Majest's Goale Keeper

(H) Titibe what #(sp) evil spirit have you familiarity with
(T) none
(H) why doe you hurt these children,
(T) I doe not hurt them
(H) who is it then #(the de)
(T) the devil for ought I #(ken) know
(H) did you never see the devil,,
(T) the devil came to me and bid me serve him
(H) who have you seen)
(T) 4 women #(and) sometimes hurt the children,
(H) who were they?
(T) goode Osburn and Sarah good and I doe not know who the other were Sarah good and osburn would have me hurt the children but I would not shee furder saith there was a tale man of Boston t#(w)hat shee did see
(H) when did you see them)
(T) Last night at Boston
(H) what did they say to you they said hurt the children
(H) and did you hurt them #(no)
(T) no there is 4 women and one man they hurt the #(s) children and then lay all upon hure and they tell me if I will not hurt the children they will hurt me
(H) but did you not hurt them
(T) yes but I will hurt them no more
(H) are you not sorry you did hurt them.
(T) yes.
(H) and why then doe you hurt them)
(T) they say hurt children or wee will doe worse to you
(H) what have you seen a man come to me and say serve me
(H) what service
(T) hurt the children and last night there was an appearnce that said #(K) Kill the children and if I I would no go on hurtang the children they would doe worse to me
(H) what is this appearance you see
(T) sometimes it is like a hog and some times like a great dog this appearance shee saith shee did see 4 times
(H) what did it say to you
(T) #(it s)the black dog said serve me but I said I am afraid he said if I did not he would doe worse to me
(H) what did you say to it
(T) I will serve you no longer then he said he would hurt me and then he lookes like a man and threatens to hurt me. shee said that this man had a yellow bird that keept with him and he told me he had more pretty things that he would give me if I would serve him
(H) what were these pretty things
(T) he did not show me them
(H) what else have you seen
(T) two cats a red cat and a black cat
(H) what did they say to you
(T) they said serve me
(H) when did you see them last
(T) Last night and they said serve me but #(shee) said I would not
(H) what service
(T) shee said hurt the children
(H) did you not pinch Elizabeth Hubbard this morning
(T) the man brought her to me and made #(hur) me pinch her
(H) why did you goe to Thomas putnams Last night and hurt his child
(T) they pull and hall me and make goe
(H) and what wold have you doe Kill her with a knif Left. fuller and others said at this time when the child saw these persons and was tormented by them that she did complain of a knif that they would have her cut her head off with a knife
(H) how did you goe
(T) we ride upon stickes and are there presently
(H) doe you goe through the trees or over them
(T) we see no thing but are there presently
(H) why did you not tell your master
(T) I was afraid they said they would cut off my head if I told
(H) would not you have hurt others if you cold
(T) they said they would hurt others but they could not #(sh)
(H) what attendants hath Sarah good
(T) a yellow bird and shee would have given me one
(H) what meate did she give it
(T) it did suck her between her fingers
(H) Did not you hurt mr Currins child
(T) goode good and goode Osburn told that they did hurt mr Currens child and would have had me hurt him two but I did not
(H) what hath Sarah Osburn
(T) yesterday shee had a thing with a head like a woman with 2 leeggs and wings Abigail williams that lives with her uncle mr Parris said that shee did see this same creature #(with goode osburn and it turned into the shape of goode osburn & yesterday being(?)) and it turned into the shape of goode osburn
(H) what else have you seen with g osburn
(T) an other thinge hairy it goes upright like a man it hath only 2 leeggs
(H) did you not see Sarah good upon elisebeth #(Williams) Hubbar last Saterday
(T) I did see her set a wolfe upon her to afflict her the persons with this maid did say that shee did complain of a wolf
(T) shee furder said that shee saw a cat with good at another time
(H) what cloathes doth the man #(we) go in
(T) he goes in black cloathes a tal man with white hair I thinke
(H) how doth the woman goe
(T) in a white whood and a black whood with a top knot
(H) doe you see who it is that torments these children now
(T) yes it is goode good she hurts them in her own shape
(H) & who is it that hurts them now
(T) I am blind now I cannot see 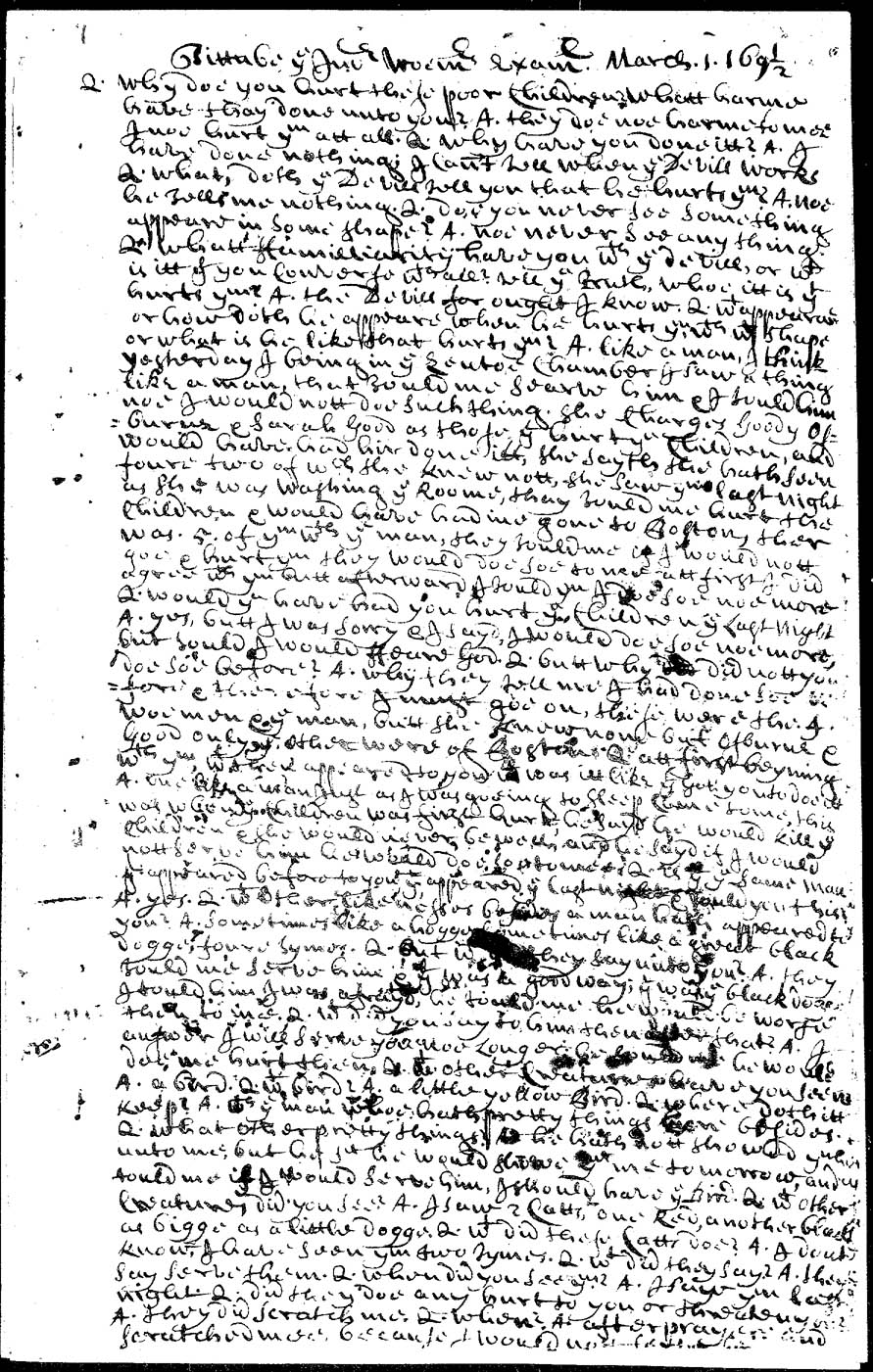 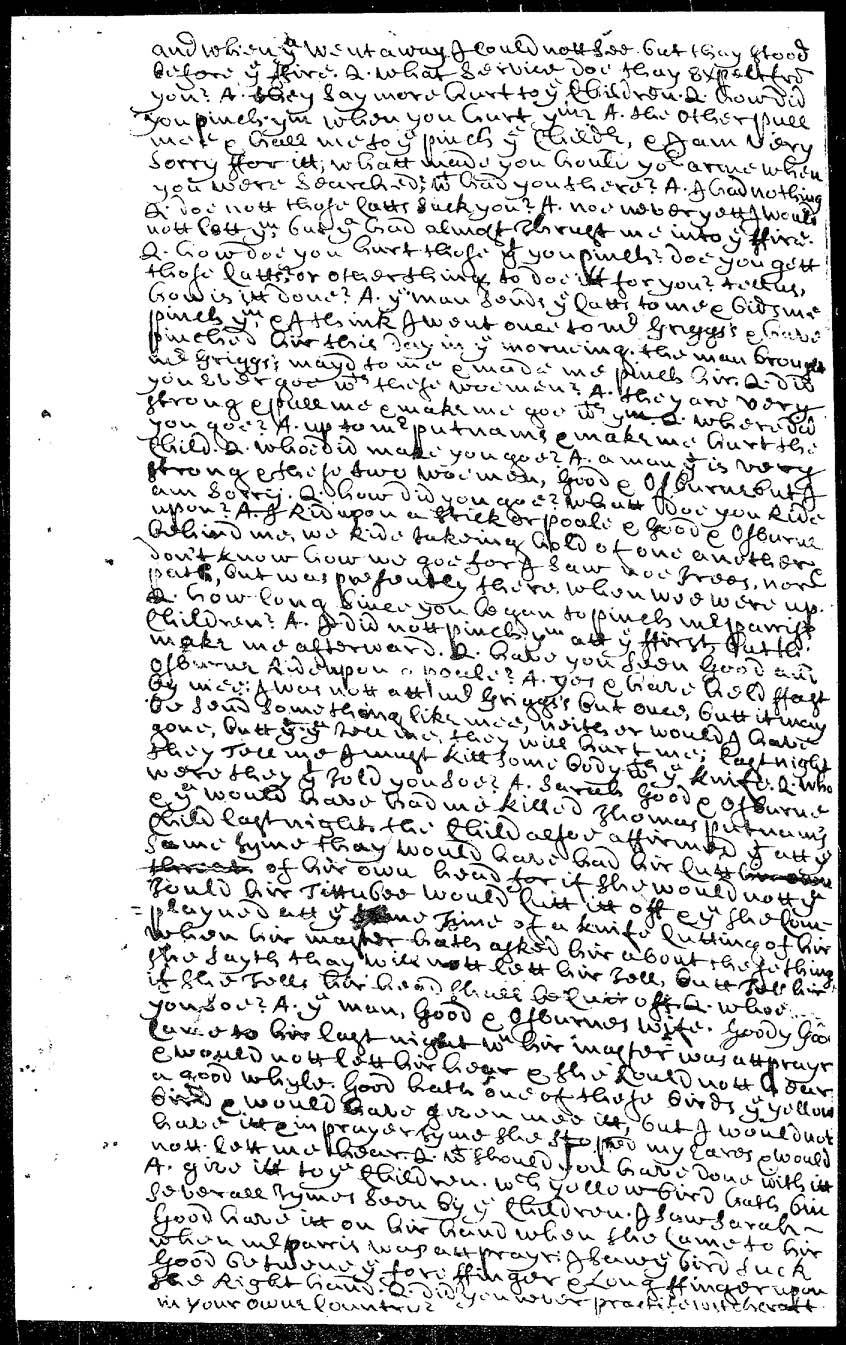 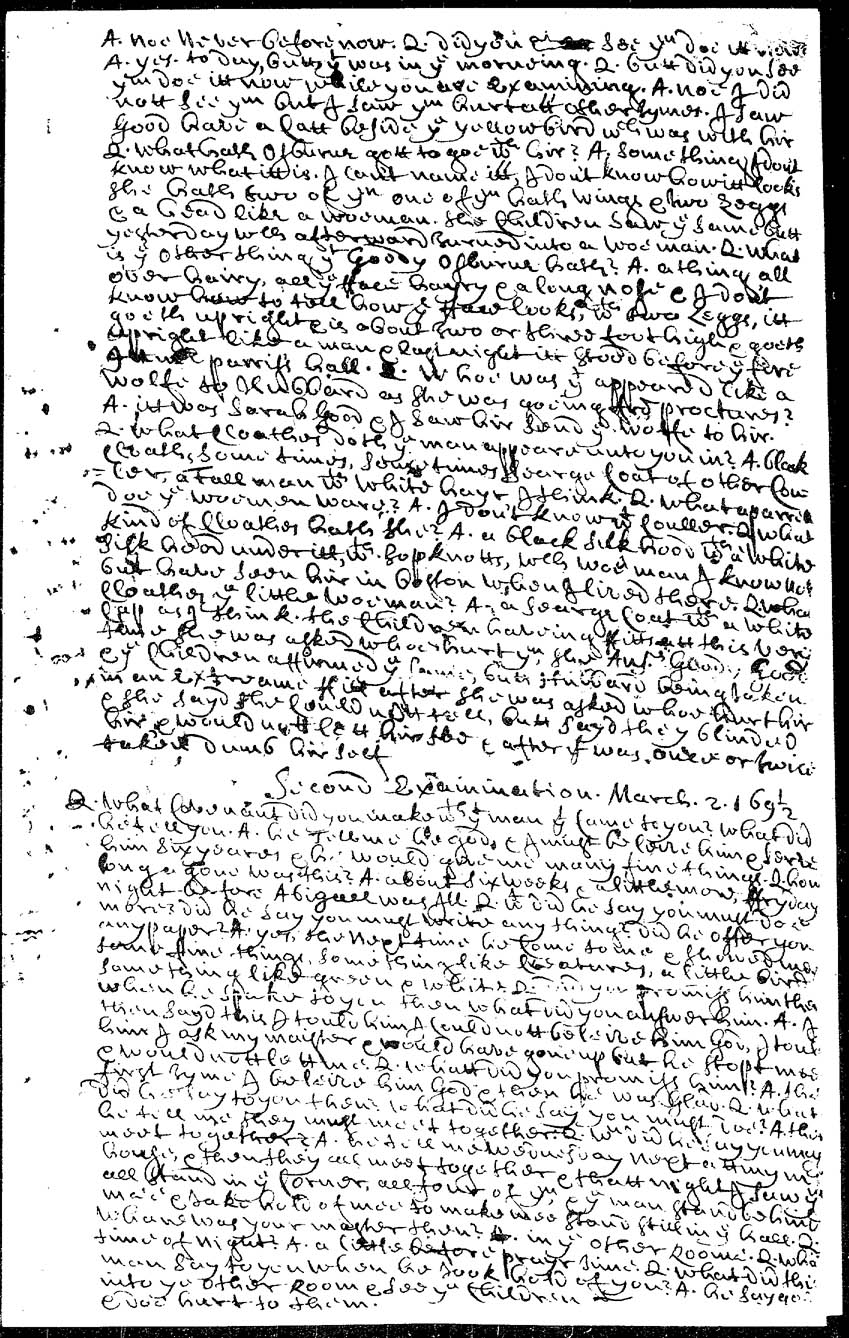 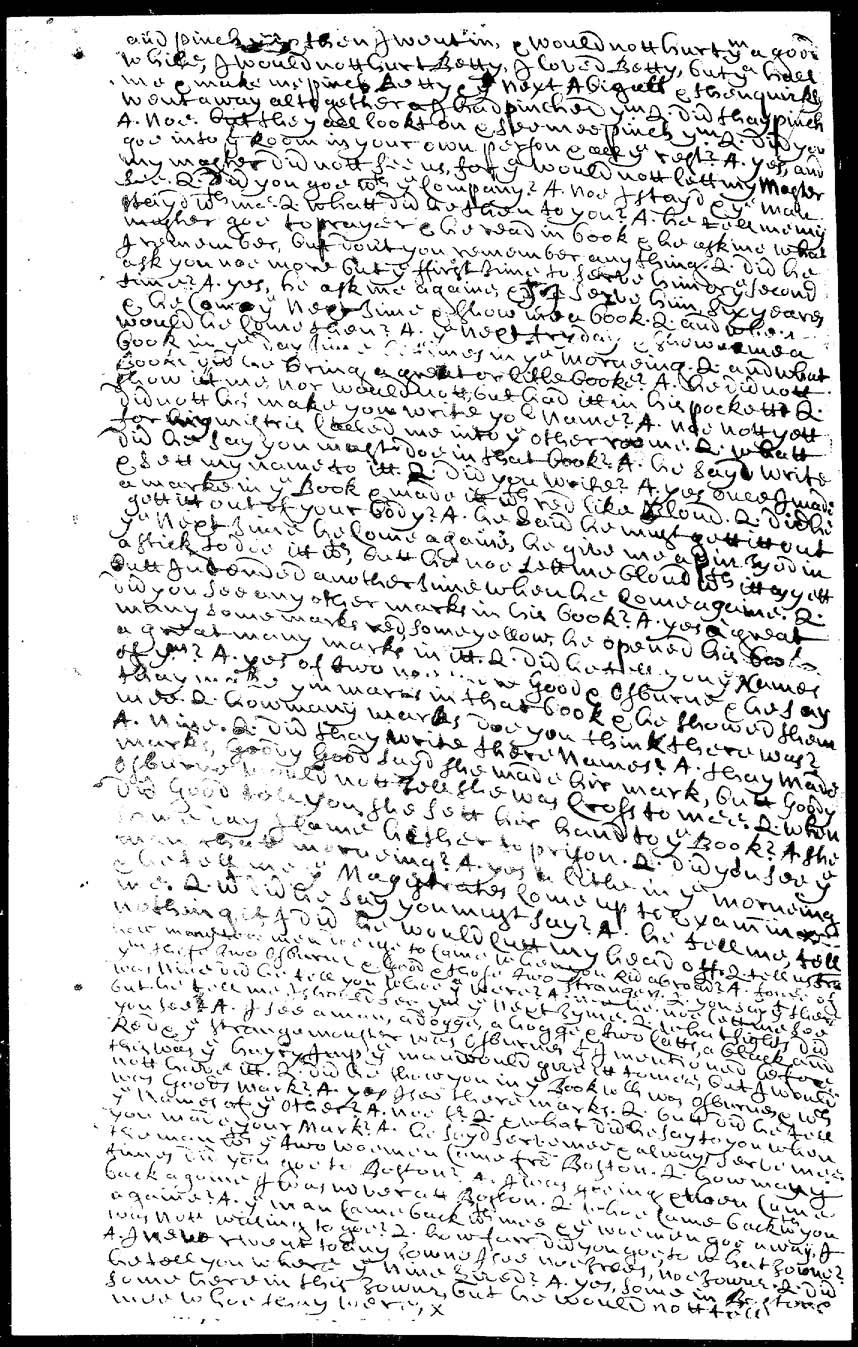 (Examination of Tituba, as recorded by magistrate Jonathan Corwin)

(Second Examination of Tituba, as recorded by magistrate Jonathan Corwin) 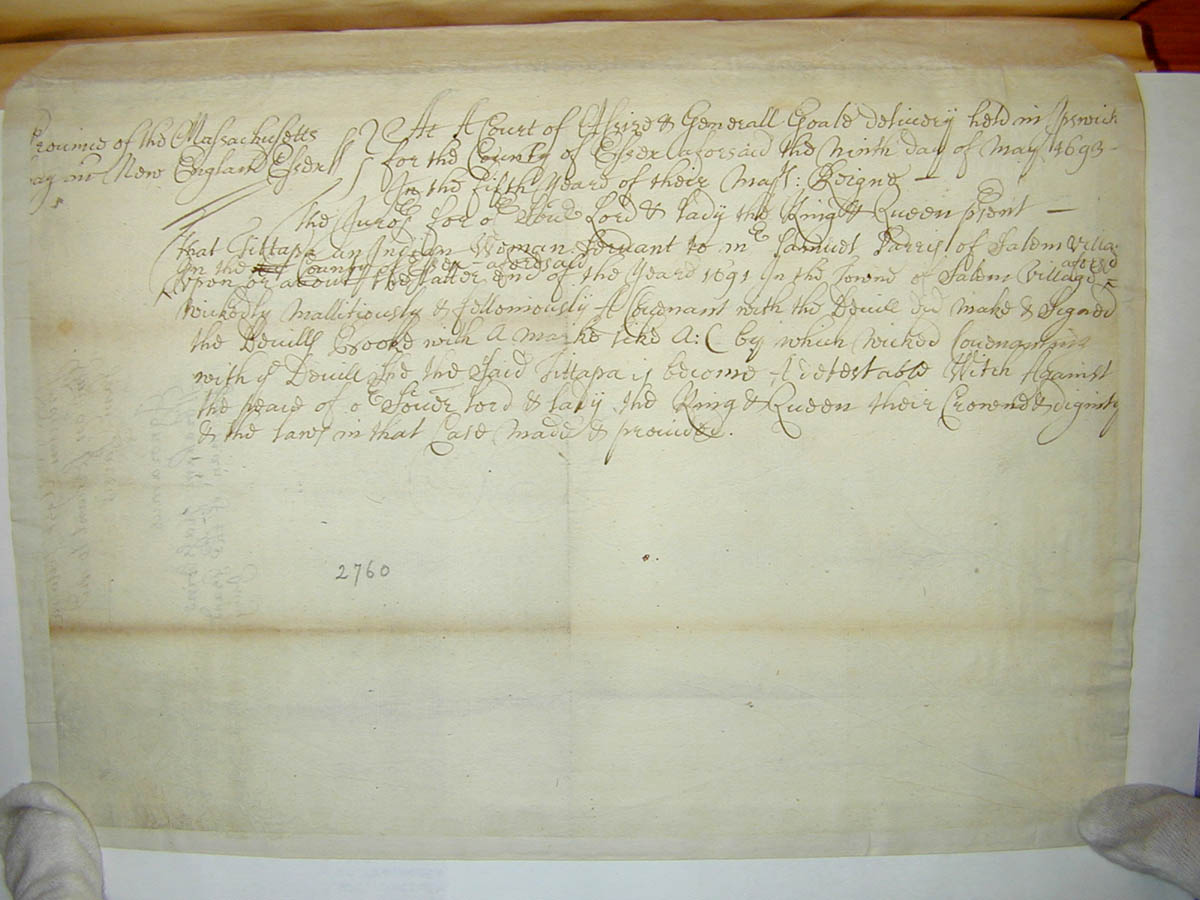 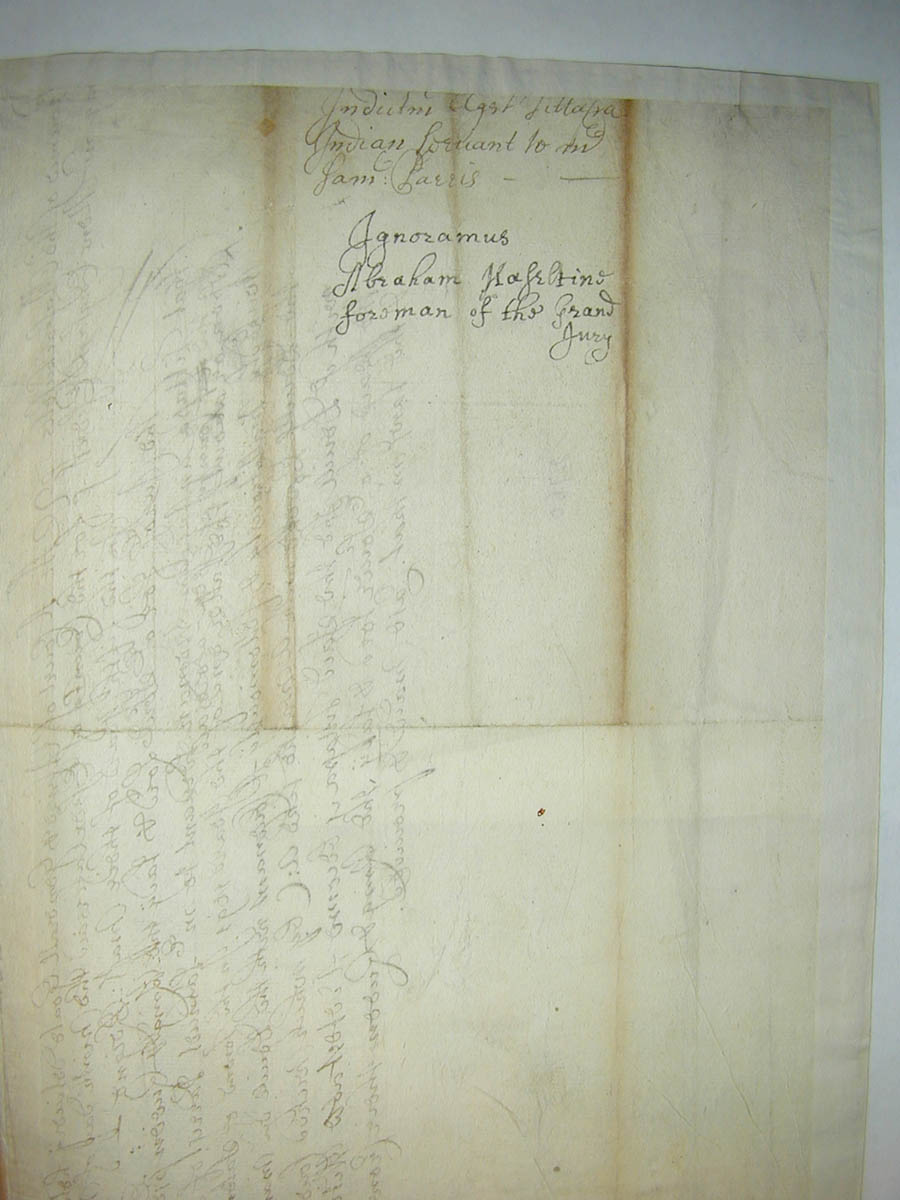 Province of the Massachusetts Bay in New England Essex ss//]

At a Court of Assize & Generall Goale delivery held in Ipswich for the County of Essex aforesaid the ninth Day of May 1693. In the fifth yeare of their Maj'ts Reigne

That Tittapa an Indian Woman servant to m'r samuel Parris of Salem village in the #(A) County of Essex aforesaid upon or about the latter end of the yeare 1691 In the Towne of Salem Village afors'd wickedly mallitiously & felloniously A Covenant with the Devill did make & Signed the Devills Booke with A marke like a:C by which wicked Covenanting with the Devill She the Said Tittapa is become A detestable Witch Against the peace of o'r Sov'r lord & lady the King & Queen their Crowne & dignity & the laws in that Case made & provided.

The Deposistion of Elizabeth Hubbard agged about 17 years who testifieth that on the 25'th february 1691/92 I saw the Apperishtion of Tituba Indian which did Immediatly most greviously torment me by pricking pinching and almost choaking me: and so continewed hurting me most greviously by times #(hurting) tell the day of hir Examination being the first of march and then also at the begining of hir Examination: but as soon as she began to confess she left ofe hurting me and has hurt me but litle sence

The deposition of Ann putnam who testifieth and saith that on the 25'th of february 1691/92 I saw the Apperishtion of Tituba M'r parishes Indian woman which did tortor me most greviously by pricking and pinching me most dreadfully tell the first day of march being the day of hir Examination and then also most greviously allso at the beginning of hir examination: but senc she confesed she has hurt me #(be) but little

The Deposition of Sam: Parris aged about thirty & nine years testifyeth & saith that Eliz: Parris jun'r & Abigail Williams & Ann Putnam jun'r & Eliz: Hubbard were most grievously & severall times tortured during the Examination of Sarah Good, Sarah Osburne,& Tituba Indian before the Magistrates at Salem village 1. March. 1691/2 And the said Tituba being the last of the abovesaid that was examined they the abovesd afflicted persons were greivously distressed until the said Indian began to confess & then they were immediately all quiet the rest of the said Indian womans examination. Also Tho: Putman aged about fourty years & Ezek: Cheevers aged about thirty & six years testify to the whole of the abovesd & all the three deponents aforesaid farther testify that #(when) after the said Indian began to confess she was her self very much afflicted & in the face of authority at the same time & openly charged the abovesaid Good & Osburne as the persons that afflicted her the aforesaid Indian
m'r Paris on his oath owned this to Sworne Salem MAy the 23rd. 1692
be the truth before the Juryars for inquest before us * John Hathorne
this 28. of Jun: 1692 *Jonathan Corwin
Jurat in Curia